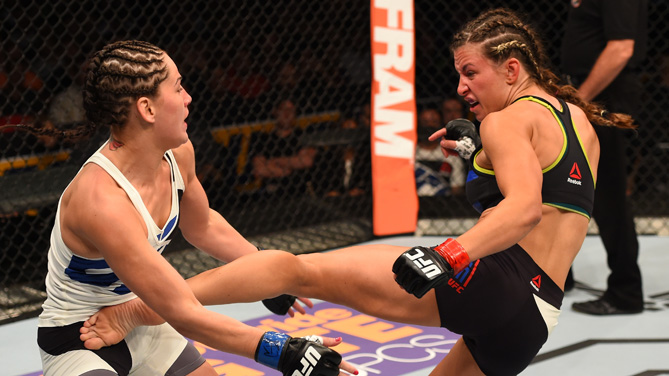 Top bantamweight contender Miesha Tate made her case for another shot at the 135-pound crown Saturday night at United Center in Chicago, scoring a gritty three-round unanimous decision over Jessica Eye in the UFC Fight Night co-main event.

Tate, who has lost bouts to current UFC bantamweight queen Ronda Rousey for the UFC and Strikeforce titles, now hopes for a third crack at the unbeaten “Rowdy” Ronda, who is set to defend her title against Bethe Correia in Brazil on August 1.

Eye calmly controlled the action in the early stages of the bout, easily ripping off combinations that reddened Tate’s face. Midway through the round, Eye rocked Tate briefly, but the Las Vegan quickly recovered. Finally, with under two minutes left, Tate sprang into action, missing on a takedown, but dropping Eye with a right to the head moments later. Now on the mat, Tate was in her world, and a series of hard ground strikes finished the round strong for “Cupcake.”

Tate’s right hand continued to land in round two, but a follow-up clinch against the fence produced no further success. Eye, who landed a hard elbow at close range, aggressively chased her foe after they broke, but counters by Tate slowed the Clevelander down momentarily. Midway through the frame, the right hand of Tate produced another knockdown, but Eye recovered quickly. “Evil” wasn’t able to get back to her feet though, as Tate landed several punches to the body and nearly pulled off a guillotine choke before the horn intervened.

After the two kept it standing for the first three minutes of the final round, Tate got the bout back to the mat and took Eye’s back, but referee Yves Lavigne surprisingly stood the fighters with 30 seconds left. Eye landed some good knees in a subsequent clinch, but this one was going to the scorecards. 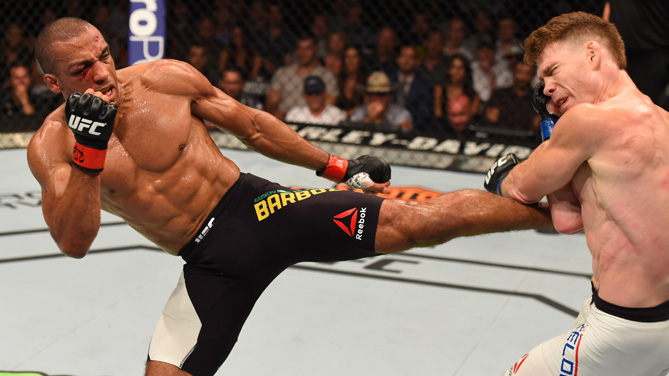 There were no takedowns, no ground work, and no lack of action in the lightweight bout between number seven-ranked Edson Barboza and Paul Felder, who both put on an exciting striking clinic before Barboza emerged with the three-round unanimous decision win.

The punches and kicks thrown by Barboza and Felder weren’t designed to find range – they were delivered with fight-ending intentions. Felder’s left hook started swelling Barboza’s right eye almost immediately, but the Brazilian’s kicks to the body and legs were doing plenty of damage of their own. A spinning back kick by Barboza brought an abrupt halt to the bout with under two minutes left when it landed low, but the gutsy Philadelphian shook it off and the two got back to business, Barboza scoring with the more significant blows.

The high-level striking action didn’t let up in the second round, and while Barboza landed the shots that produced audible smacks upon landing and garnered oohs and aahs from the crowd, the aggressive Felder kept pressing his opponent while getting in more than his share of shots.

Finally in the third, Barboza’s patient and punishing attack pushed him to a comfortable lead, not that it stopped Felder’s attempts to end the fight in flashy fashion. But this entertaining 15-minute bout belonged to the Rio de Janeiro native, who improves to 16-3. Felder suffers his first pro loss, falling to 10-1. 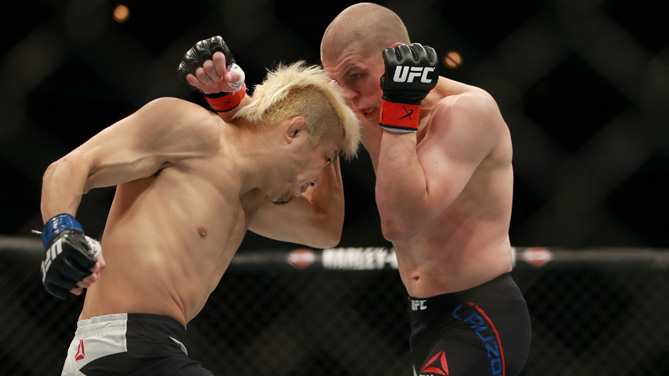 The UFC’s all-time bonus king, Joe Lauzon, had a tough assignment in fighting his MMA hero Takanori Gomi, but the New England lightweight got the job done, stopping the Japanese star in a single round.

“He’s a legend of the sport, one of the guys I idolized when I was in high school and college, so it was pretty cool to be in the cage with him, kinda crappy that you have to hurt your hero, but that’s the way it goes,” Lauzon said.

Gomi took an early lead behind his striking attack, but you just had a feeling that Lauzon was waiting for his chance to get the fight to the mat, and once he found that opportunity, he took it, got the former PRIDE champion down, and in a scramble, he took his foe’s back. Once there, Lauzon surprisingly didn’t look for a submission, but instead, he flattened out “The Fireball Kid” and ended the bout with a series of unanswered strikes, referee Herb Dean stopping the bout at 2:37 of the opening frame.