Tarec Saffiedine: From Being Rory to Beating Him

"I want to fight him because I believe I have the skills and the mindset to beat Rory MacDonald." - Tarec Saffiedine 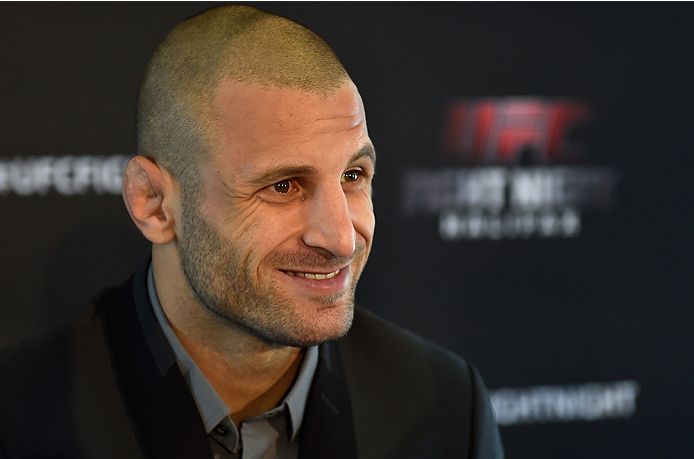 “It is said that if you know your enemies and know yourself, you will not be imperiled in a hundred battles…” - Sun Tzu

Not like his favorite TV show or what Rihanna song he’s listened to the most. No, the last Strikeforce welterweight champion believes he understands the top Canadian talent as a fighter inside the Octagon. How MacDonald attacks, keeps distance, his game plan.

And, Saffiedine’s belief is that this will lead him to victory over MacDonald in the UFC Fight Night main event on Saturday night.

“I watched his fight against Tyron Woodley,” Saffiedine said. “I was having good feelings while watching that fight because the way he fights, the way he moves, the way he throws his kicks and punches and goes for his takedowns, his overall game - I could really understand it. I could really pinpoint his movements. I could really see myself being able to beat him. That’s also why I want to fight him because I believe I have the skills and the mindset to beat Rory MacDonald.”

Saffiedine’s insight into MacDonald’s head is not just his own idea. The 28-year-old “Sponge” was given the task to actually be “Ares” for former two-time UFC champion BJ Penn when he was set to tangle with MacDonald at UFC on FOX: Henderson vs. Diaz in 2012. Team Penn picked Saffiedine to emulate MacDonald in sparring and, when studying up on his future opponent, he realized he might have MacDonald figured out.

“When BJ Penn was getting ready to fight Rory MacDonald, BJ’s manager asked me to come over and train with BJ for the camp,” Saffiedine remembers. “I was watching tape and watching his technique, his distance and everything. When they asked me to mimic Rory’s style, I was able to do it pretty well. It was one of those things, I could really understand his game and that’s why I’m really confident going into this fight.”

Don’t be mistaken, the #9 ranked welterweight Saffiedine doesn’t believe there is a gimmick or a trick to beating the #2 ranked MacDonald. There is a more than healthy level of respect for the 17-2 MacDonald, but he is resolute knowing he has both the physical skills and mental determination to do what very few have been able to do.

While a new name to Octagon enthusiasts, Saffiedine was not only the last fighter to leave the Strikeforce cage a winner - he did so with a gold title around his waist. And with an impressive 15-3 pro career with his only losses by decision, Saffiedine is an incredibly dangerous and difficult opponent who is eager to prove he can earn a glittery belt in the UFC as well by defeating “Ares” in Halifax.

“Initially, I asked to fight Rory,” Saffiedine said. “He’s probably one fight away from the title shot. I want to get up there as well. He’s one of the best. If you want to be the best then you have to beat the best. A win over Rory would put me right to the top. Rory is a tough opponent and a good fighter. And, I think this is the biggest opportunity of my career and I’m going to grab it 100%. I’m training really hard. I don’t want to let this opportunity slip away. I expect to win.”

It will be 10 months to the day this Saturday when Saffiedine made his highly-anticipated Octagon debut at UFC Fight Night: Saffiedine vs. Lim. After spending 2013 recovering from two surgeries, he took home a unanimous decision win and a Fight of the Night bonus against young knockout artist Hyun Gyu Lim. Although the striking specialist scored three knockdowns en route to becoming the first Belgian to win inside the Octagon, Saffiedine was content with the performance that improved his current win streak to five, but knows he can do better.

“It was a good and a bad experience - I’ll start with the bad,” Saffiedine reveals. “I think I could have done a better job in the fight. I feel like I made a lot of mistakes that I should not have done. It’s a learning process. I had the injuries that I had to take care of the whole year and it was up and down. I had huge announcements: I was supposed to fight Robbie Lawler and then Jake Ellenberger, but those fights dropped out. It was kind of tough to come back. It was good because I really wanted to fight in the UFC and to get the win for two reasons. The main reason was to represent Belgium in the UFC. I didn’t want to just come and put on a show. It was really important for me to win the fight. I really wanted to prove that those injuries wouldn’t set me back. We ended up being the Fight of the Night in the main event and that was a great experience.”

The Lim bout was in Singapore, which Saffiedine knows very well from training out there originally for Muay Thai and, more recently, spending two weeks at the start of his camps at Evolve MMA. Obviously, Sponge still gets unparalleled help with striking from the famed Sityodtong family as well as a dozen other Muay Thai world champions, but Saffiedine gets to roll with BJJ wizard Shinya Aoki and excellent wrestlers like Ben Askren and Jake Butler.

“Before I came to the US in 2007, I used to travel a couple times a year to Thailand to fight and train,” he said. “I really love Muay Thai and Thailand is the Mecca, the hub of Muay Thai. When I went to the U.S., my main head coach was training me and managing me for a while and then he moved out to Singapore to Evolve MMA to teach the guys. Last year, he invited me to come out and train with the team. I really love training there. I don’t know how many Muay Thai world champions they have, but it’s like 10 or 15 world champions. It’s high level Muay Thai. Those guys have 200 or 300 fights. They have high level jiu-jitsu guys, Olympic wrestlers. It’s a really, really high-level gym and it’s an MMA gym as well. I love Asia and I love training over there and learning their new techniques.”

At home in California, Saffiedine puts in the majority of his gym hours with Dan Henderson at Team Quest in Temecula. Also, Sponge drives to San Diego to work with U.S. Olympic boxing coach Basheer Abdullah and to Los Angeles to spar at Blackhouse MMA under the tutelage of Muay Thai coach Daniel Woirin.

“I train my butt off every day to win the fight,” states Saffiedine. “I don’t want to just show up and say, ‘This is a big opportunity and it’s good if I lose against one of the biggest names in the UFC in the division.’ That’s not what I want. I want to show up and take that win. What the fans can expect, I will be 100% and aggressive and coming to put on a show and getting my hand raised at the end of the fight.”

On Saturday night, Saffiedine believes he is ready to ascend to the top of the welterweight division by taking down MacDonald.