"I’m just thankful that I’m in the UFC and I’m fighting and I’m winning.
I was wondering if I was good enough, and now I go ‘maybe I am.’" - Costa Philippou 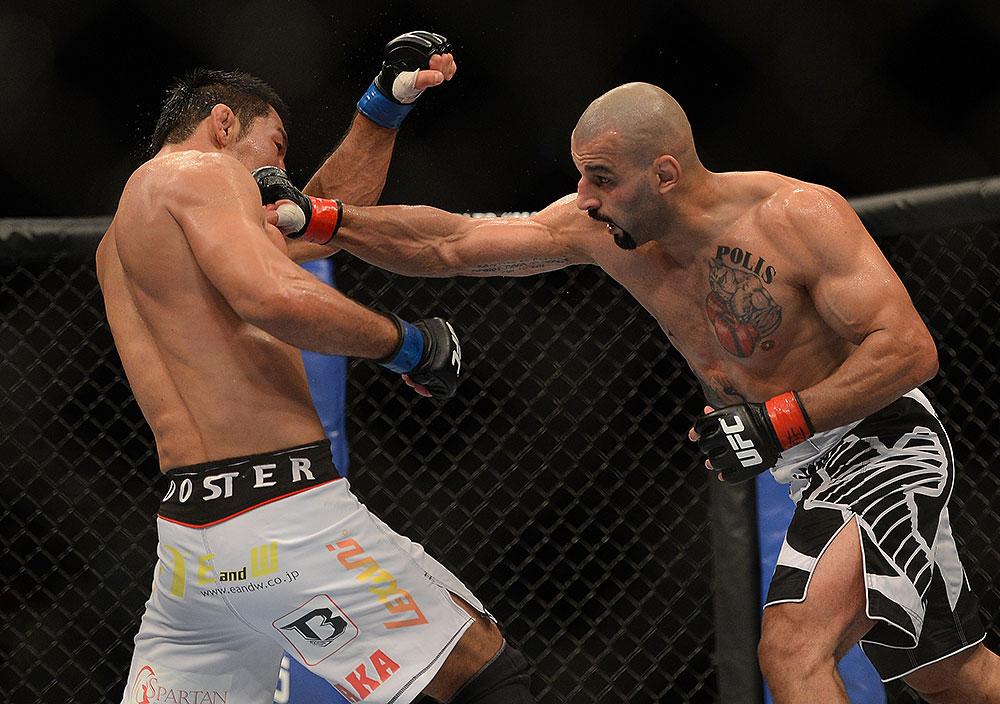 In the world of Costa Philippou, there’s no room for bravado or bold statements delivered for the sake of a headline. The way he sees it, your mouth isn’t going to help you when the Octagon door closes and it’s time to fight. So pardon him if he’s not going to engage in any pre-fight antics as his UFC 155 bout with Tim Boetsch approaches. It’s just his way.

“I’m just real with everything,” said the Cyprus native who now makes his home in Long Island, New York. “Everybody’s talking about ‘I can’t wait to get a title shot, I want to fight the champion.’ Come on, that’s all talk to impress everybody. I don’t want to fight the champion (Anderson Silva) and to be honest, I don’t think I will ever want to fight that guy. (Laughs) I’ll be happy to keep winning, and we’ll see in two, three years if he’s still around.”

It’s a complete 180 from what you usually hear from most fighters, and it’s hard not to love it simply for being a refreshing change of pace. But that’s how Philippou is built. Despite being 33, the former boxer could still be considered to be in the early part of his pro MMA career, and he doesn’t carry the extra baggage younger fighters do in terms of building up their profile. Philippou isn’t doing this for the fame; fighting is his job, he’s good at it, and he’s going to keep doing it until he decides it’s time to stop. And if you ask him a straight question, you’ll get a straight answer, especially when it comes to his day job.

“When they tell you to lose 30 pounds, and you’re going to fight in front of 50,000 people, and there will be a few million watching you on TV, and your family, then it’s not as fun as you think it’s gonna be,” he said of the fighting life. “Everybody asks ‘are you excited to fight?’ And at the beginning I thought there was something wrong with me because I wasn’t excited to walk into the cage. And then I sat back and thought about it; what’s there to be excited about? They’re gonna lock me in a cage, they’re gonna let somebody loose, and he’s gonna try to get me. When I get away and I’m not broken and I won, yeah, then you get excited and happy. But before, it’s like locking you in a cage with a pitbull and they’re going to let him loose. Are you excited? Right before, I don’t think anyone’s excited.”

Fans are excited to watch Philippou go to work though, and since arriving in the UFC for a short notice bout with Nick Catone in March of 2011, he’s won four of five, including four in a row. Just like that, he’s gone from east coast prospect to middleweight contender, and it’s been such a whirlwind so far that it hasn’t even sunk in for him yet.

“After this fight, I’ll sit back and think about what I did, but I’m not done yet,” he said. “I have one more in me for this year, and then everything will sink in. Everything happened so fast. I’m just thankful that I’m in the UFC and I’m fighting and I’m winning. I was wondering if I was good enough, and now I go ‘maybe I am.’”

He laughs, perhaps knowing that a guy with consecutive UFC wins over Jorge Rivera, Jared Hamman, Court McGee, and Riki Fukuda is more than good enough to keep his place on the sport’s toughest roster. But it was a gradual process for him.

“Nobody wants to admit it, but everybody has doubts,” said Philippou. “You always think ‘am I good enough to compete against these guys? They look so good.’ And maybe I was lucky the first time or the second, even the third, and now I realize that maybe I am good. So I think I’m good enough to beat this guy too.”

“This guy” is another formerly under the radar contender in Pennsylvania’s Boetsch. Sporting a four fight winning streak of his own, including 2012 victories over Yushin Okami and Hector Lombard, the fanbase of “The Barbarian” is rapidly growing, and one of those fans is Philippou, who got on board the bandwagon after Boetsch’s come from behind knockout of Okami in February.

“I was in Australia for the fight (against McGee) and I was watching the (UFC 144) show and I was so impressed with that guy,” said Philippou of Boetsch. “And he knows, more than anybody else, he was getting his ass beat. Two rounds, he couldn’t do anything. And in the third round, I don’t know what his coach told him, but he walks in like the Terminator. It was like nothing happened. He didn’t look tired and he walked in and knocked Okami out. I was so impressed with that guy. I didn’t know I’d have to face him a few months later (Laughs), but it is what it is. I know everybody’s tough in the UFC, but I think that guy’s a special case. I don’t know what you have to do to beat this guy.”

He’ll find out this weekend in Las Vegas.

“Yeah, I’ll find out if he just looks good on TV or if he’s the real thing,” chuckles Philippou, who should have been done for 2012 if his UFC 154 match with Nick Ring took place, but when Ring got ill on the day of the fight, the New Yorker was left without a fight. Fate intervened shortly thereafter though, when Philippou’s teammate Chris Weidman got injured and was forced out of the Boetsch bout at UFC 155. In stepped Costa.

“You get disappointed, because honestly I thought that was a good fight for me,” he said of the aborted meeting with Ring. “I felt confident, and walking in, I go ‘all right, he’s a good fighter,’ but I saw a few things that I thought I was going to be able to do in that fight and go five in a row. Everything happens for a reason, and it ended up being a good reason. I’m fighting on the biggest show of the year, main card, Tim Boetsch. Come on, it doesn’t get better than that, unless I get my ass kicked.”

Philippou laughs again, knowing that he’s almost breaking the fighter code by admitting that defeat could be the end result when two well-trained athletes collide in the Octagon. He doesn’t care though; he’s going to be himself.