The Tao of The Happy Warrior

"This is my dream. It was my
dream from when I debuted as a fighter, to be able to fight in the UFC,
and I feel like this is it." - Roxanne Modafferi 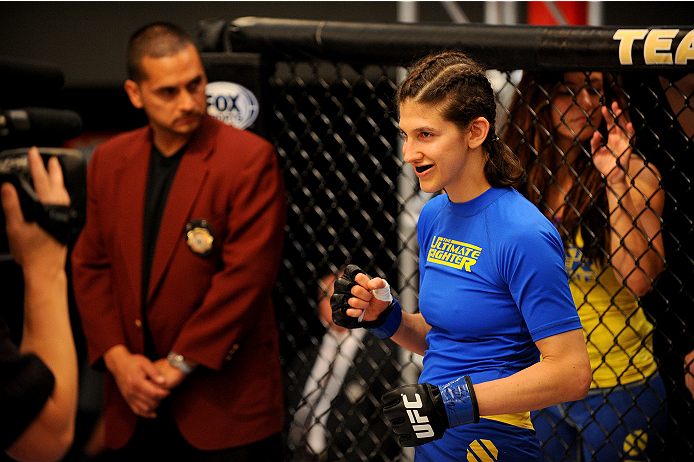 When you’re a New Yorker who has never been accused of being soft-spoken, it's easy to get taken aback when someone asks you to repeat something. But when the person making the request is Roxanne Modafferi, it was no problem to say “Welcome to the UFC” a second time. And as I did, she started to laugh, making it clear that she just wanted to hear those four words once more.

That’s the reaction you get when you’ve put ten years of work into something that for the longest time seemed nothing but a dream, but that now is reality. So did Modafferi think that she would ever be welcomed to the biggest MMA organization on the planet?

She doesn’t need to hope any longer, as “The Happy Warrior” will be making her Octagon debut this Saturday against Raquel Pennington. It’s been quite a journey for one of the most popular female fighters on the planet – strike that, one of the most popular fighters on the planet -  and as she gets ready for this weekend, it’s almost a surreal experience.

“This is my dream,” said the 31-year-old Delaware native. “It was my dream from when I debuted as a fighter, to be able to fight in the UFC, and I feel like this is it – if I win, I get officially signed to the UFC, and if I lose, who knows, unless I put on the Fight of the Night. I’m trying to think positively, and I’m really nervous about it, but I’m excited and nervous, and just trying to keep training hard.”

In 2013, the UFC brought ladies into the fold, and The Ultimate Fighter introduced the fairer sex as well, changing life considerably for women in MMA, and in particular for Modafferi, a longtime contender in various weight classes before hitting a rough patch after moving to flyweight in 2011. So when the UFC and TUF made their announcements, she was excited, but also cognizant of the reality that she possibly had a bit of a rocky road ahead of her to get to the Octagon.

“I’ve been fighting for ten years, and frankly, after I dropped to 125, my winning record kind of was a losing record, so I figured that first I had to win in Japan a few times, then I’d go to Invicta and have to win a few times,” said Modafferi, 15-10 as a pro. “I saw this really long road ahead of me and I wasn’t sure I had enough time in my career.”

TUF would be the game changer though.

“When the opportunity for The Ultimate Fighter came up, it was just awesome and I jumped at it,” she said. “I thought this was my last chance to get in.”

And while fellow veterans like Tara LaRosa and Tonya Evinger were upset in their fights to earn a spot on the final cast, Modafferi submitted Valerie Letourneau and made it into the TUF 18 house. And yes, if you followed her career for any length of time, you would assume that Modafferi is the last person you’d see on reality TV, but she was fine with it.

“I don’t have anything to hide, so I figured I’d be okay,” she said, and she was, gathering a whole new legion of fans while retaining her previous followers. And though Modafferi was eliminated from the competition by eventual finalist Jessica Rakoczy, she believed that the idea of returning to fight in the UFC on the season finale event was a realistic one. How realistic? She relocated from her home for the past several years in Japan to move to Las Vegas in the hopes of getting a bout on Saturday’s card.

“As far as I know, I’ve permanently moved here,” she laughs. “I love Japan very much, so after TUF ended, it was a very hard decision for me, but I didn’t even know if I was going to be on the finale. It was a possibility hanging over my head. But I felt that if there was ever the time to do this, it’s now, so I took a gamble and got ready for a potential fight.”

She got that fight with Pennington, and as she waits for the opening bell, she’s been getting acclimated to living in the United States once again. The biggest adjustment?

“Not working weekends, which is awesome,” she laughs. “I worked full-time and now I’m not working full-time, so I have more time to rest. It’s really like a whole re-lifestyle change for me. I kind of got used to it living in the TUF house already. That was the big shocker.”

She made the most of it though, just like she has with all the ups and downs that come along with life in the fight game. Surprised? If you’ve watched Modafferi on TUF, you shouldn’t be.

“It’s the way you think,” she said. “Years ago, I was having a bad day and I challenged myself that, no matter what, I would always be able to find one positive thing about anything, no matter how crappy it was. So I had a horrible day, and I thought, well, at least I had ice cream. (Laughs) Obviously the ice cream doesn’t equal the badness of the day, but it’s one positive thing, and I realized just my mind trying to find something positive actually helped improve my mental state and my mood. You have to train your mind to think that way.”

Modafferi will take that attitude with her all the way to the Octagon on Saturday. As for the idea of finally reaching the place she’s fought to be in for a decade, she has another way of dealing with those nerves.

“Metallica,” she laughs. “It’s hard though. I always get stomach aches and stuff, and it’s hard. So I just try to listen to music.”

Welcome to the UFC, Happy Warrior.