Heavyweight Tanner Boser Is Eager To Get Back Inside The Octagon After Being Away For Over A Year
By Maddyn Johnstone-Thomas, on Twitter @MaddynThomas • Sep. 15, 2022

It’s been over a year since Tanner Boser stepped inside the Octagon, and to put it simply, he can’t wait to get back to work.

He had a fight canceled in December against Sergei Pavlovich, and then in April, he was scheduled to face Rodrigo Nascimento, who withdrew from the fight for undisclosed reasons. He was replaced with Alexandr Romanov, but the bout was canceled altogether after Boser pulled out due to an injury. This weekend at UFC Fight Night: Sandhagen vs Song, he is rescheduled to fight Nascimento, who has also spent time away from the Octagon, with his last performance coming last July.

“There’s definitely pressure coming back, but there is for him, too; he’s been out for a year, as well,” Boser said. “I’m ready to get back in there, for sure. The main urgency is financial, and I have to win this fight.”

The thing that Boser missed during his time away from the Octagon was the paycheck. For him, it doesn’t matter who the opponent is, he’ll say yes to anyone, anytime. There were 21 days in between his last two fights. The first came against Ilir Latifi on June 5, 2021, where he lost via split decision. Boser then went on to face Ovince Saint Preux three weeks later, securing a second-round knockout. 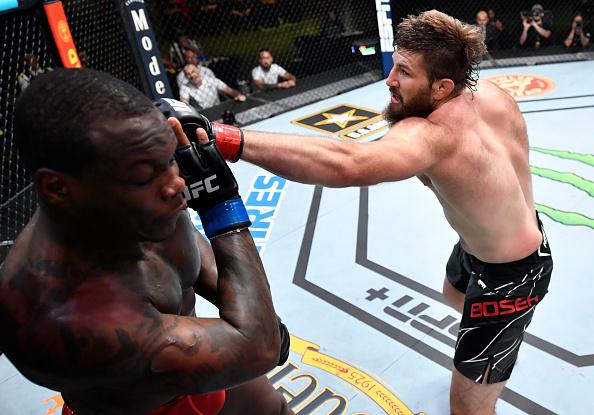 Even though Boser rebounded with an impressive victory over Saint Preux, he realizes how much time has passed since that happened and what it means for the present.

“I feel it myself - you have a feeling, an emotional kind of energy that you have after a win like that, and my momentum is gone, it’s been over a year,” Boser said. “Of course, people aren’t talking about it, why would they? There’s been so many awesome fights in the last year, so I have to go back, and I have to win this one now. This is all that matters. The last fight doesn’t matter, the fight before that doesn’t matter, none of them matter, there’s only ever one biggest fight and it’s your next fight.”

MORE UFC FIGHT NIGHT: Cory Sandhagen Is Ready For A ‘Real Run’ At The Title | Javid Basharat Is Taking The Leap | Yadong Song: "My Dream Is To Be Champion" | Gillian Robertson Has Found Belief In Herself

That next fight comes against Nascimento, who holds an overall record of 8-1, 1 NC. The Brazilian has never been submitted, but has secured six of his eight wins by submission and two wins by knockout.

On the other hand, Boser’s record stands at 20-8-1, with 11 wins by knockout and two by submission, and the 31-year-old Canadian believes he has all the skills to come out victorious on Saturday.

Boser attributes his success in the division to his footwork and speed. The Alberta native acknowledges that it’s hard to know what to expect against an opponent like Nascimento. He’ll be ready for whatever happens inside the Octagon, whether it be a fast start or a cautious start, but he is going to keep his game plan a mystery until fight night.

He just wants to come out victorious.

“The type of performance I would be proud of is a win. Any kind of win, that’s all. That’s the main thing, that’s the only thing.”