Tanner Boser Just Wants To Have A Blast

Tanner Boser's rise in the UFC's heavyweight division has been great, but what's most important to the Canadian is that he enjoys the ride.
By Thomas Gerbasi, on Twitter: @TGerbasi • Nov. 6, 2020

After two consecutive knockout wins, a third straight victory, this one over Andrei Arlovski on Saturday in Las Vegas, could very well land Tanner Boser in the heavyweight top 15.

Yet according to the Canadian, if it happens, it happens. He’s got more pressing matters on his mind leading up to fight night.

“I ain't trying to go anywhere,” Boser said. “I'm not trying to get cut and I'm not one of these guys who comes into UFC, gets a couple wins and starts spewing s**t about how they're going to be the champion. I don't give a s**t about any of that; I just want to be here for a long time. I think Arlovski did it right.”

Arlovski has done it right, weathering the storms that come with two stints in the UFC while remaining standing and relevant in the division at the age of 41. These days, the former champ doesn’t talk about regaining the title he once held. He’s content with showing up to fight, facing the best competition and as is the case in two of his last three bouts, winning.

That winning thing is what keeps Boser motivated, too, because the more you win, the more job security you have. And after 26 pro fights, that’s a big deal. So don’t ask “The Bulldozer” about MMA math and where a certain win over a certain opponent gets him, even if he does admit that he’s got some footing in the UFC after four fights. 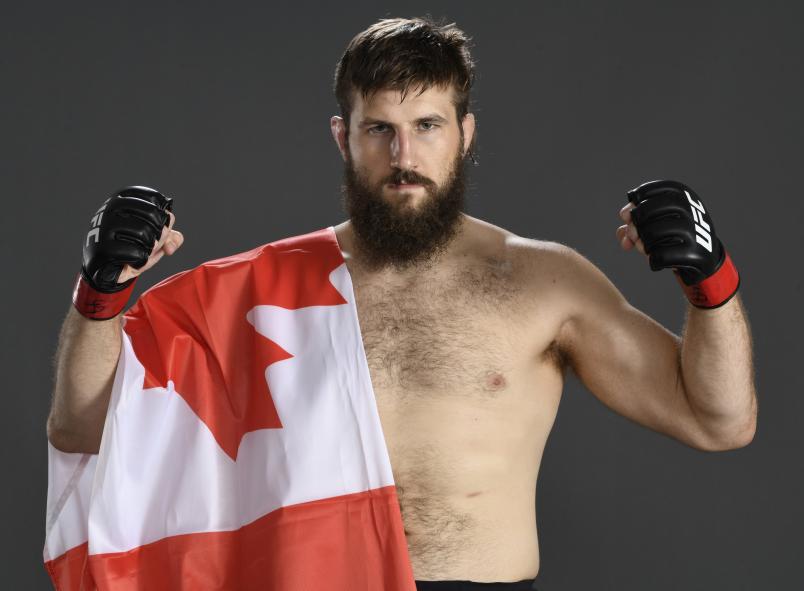 Tanner Boser of Canada poses for a portrait after his victory during the UFC Fight Night event inside Flash Forum on UFC Fight Island on July 26, 2020 in Yas Island, Abu Dhabi, United Arab Emirates. (Photo by Mike Roach/Zuffa LLC via Getty Images)

“I guess I'm established,” he said. “And when you say people see my name and they know it, I'm more well-known because UFC is, of course, the biggest promotion in the world, but also the main one people pay attention to in North America. A lot of the ones I fought for all over the world, I would maybe get recognized in other places, but not as much here. So yeah, it does feel like I'm established. I'm doing well, so far, but I gotta keep it going. I gotta keep winning more than I lose in order to stay established.”

Following a 1-1 start to his stay in the big show, Boser scored a pair of knockouts over Philipe Lins and Raphael Pessoa that showed off his unique skill set among the big men. Sure, he’s got the “Bulldozer” nickname, but he’s not running through people recklessly, using size and strength to, well, “bulldoze” people. At 6-2, 235, that’s not going to happen in the heavyweight division. Instead, he’s got to use smarts, speed and technique to get the job done.

“I don't have an athleticism, strength and power advantage over most guys,” said Boser, who has nonetheless ended 12 of his 19 wins by knockout or submission. “I've always had to use game planning and technique. I weigh 235 pounds; I've never been a titan of a heavyweight. So I've never been able to be an explosive, athletic guy who can get by on that. I've always had to be better than the other guy. So it's been different for me.”

Different doesn’t mean bad, though, and Boser seems to have found his groove a year into his stay in the Octagon. And while he’s fought UFC level competition before, it’s a lot different doing it in the actual show. Again, that doesn’t mean it’s a bad thing. In fact, Boser feels some of his success can be attributed to having things in order that you usually don’t think about when it comes to a prizefight.

“I've already fought big guys before I got to UFC,” Boser said. “Of course, a majority of the very best guys in the world are in UFC, but I have fought a high level of competition for a long time. I feel better fighting in UFC than I do in other places because the canvas is better. I don't slip at all. I've got perfect grip. Everything slowed down for me because I get to react appropriately because my footwork gets to be there. I love it.”

And now is his chance to take that step up that every fighter has to take against an established contender or former champion. And though the word “gatekeeper” is seen as an insult to fighters like Arlovski, Boser doesn’t necessarily agree.

“I know people consider Arlovski a gatekeeper, but I don't think there's a negative connotation to gatekeeper; you need them,” he said. “Arlovski's a legend and he's been around for a long time. I have a lot of respect for him, it's a big fight for me, and I'm not looking to try and root myself in the top 10 or 15 or something. Beating him gives me a win bonus, gives me a slight pay bump and I get the chance to do it again, and that's what's most important.”

It’s the perfect outlook to have, because if you count on things happening before they do, fighters like Arlovski can deliver a rude awakening with one swing of the fist. So let Tanner Boser be; he’s doing just fine the way he is.

“I love my lifestyle and being in UFC has given me the ability to do just that,” he said. “I don't have to work a side job anymore, and I don't have to work at a bar. I'm having a blast, and I know that when these days are eventually over, I'm gonna look back on it very fondly, probably as some of the best years of my life.”