Tampa is chance for Gamburyan to climb back up

Manvel Gamburyan has been to the top before and he’s climbing his way up again.

At the moment, the Armenian battler known to fight fans as “The Anvil” is not listed among the top 15 in the UFC bantamweight division, but with a big victory over John Dodson this Saturday, Gamburyan will no doubt leapfrog many in the rankings. Already owning back-to-back wins in this weight class, he has his sights set on collecting his Ws until there’s UFC gold on the line.

“Let me make it easy for you - I have no problem fighting anyone at 135 on any given day,” Gamburyan said. “Anywhere, any place, anytime. I have no problem fighting any opponent at 135. This time it’s John Dodson. I’m going to go out there and do what I do best. It’s all the same; get the W and move on. I’m here for a reason. I want to go all the way. There’s no surprise, there’s no secret. My first fight was with Cody Gibson, my second fight was with Scott Jorgensen and my third fight is now John Dodson. My plan is to stay at 135 and beat every guy they put in front of me and go for the gold. That’s my plan.”
RELATED CONTENT: Gamburyan fighter bio | Matchup vs. John Dodson

In 2007, Gamburyan fought his way to The Ultimate Fighter 5 finals as a lightweight. Three years later, The Anvil earned a shot at the WEC featherweight title after three consecutive wins in the division, including a knockout of former champ Mike Brown. Now, Gamburyan is competing at, arguably, his optimum weight and has secured a guillotine choke of Cody Gibson and, most recently, a dominant unanimous decision over one-time title challenger Scott Jorgensen at UFC Fight Night: Mir vs. Duffee. 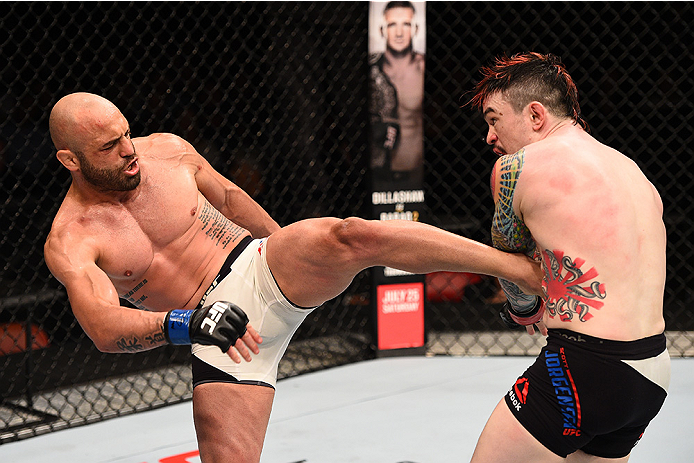 “I like big names and I thought Scott Jorgensen had a good name,” Gamburyan said. “For my first fight at 135, I thought Cody Gibson was a very tough opponent. It wasn’t my best performance, to be honest, but I did finish him. The second fight, I felt much better, I looked much better. This third time, I’m looking lean and mean. I just can’t wait to go out there and show what I’m capable of. I’m feeling excited. I’m feeling strong and healthy. I’m ready to go. I can’t wait to fight.”

With an 18-9, 1NC pro record spanning a myriad of weight classes, Gamburyan is an unpredictable and dangerous opponent for anyone at bantamweight. Not only has he fought and defeated heavier foes, but, at 34 years old, Gamburyan amazingly has 17 years of pro MMA experience, which is on top of years of competing in international judo competitions. Gamburyan is a skilled takedown artist, nearly half his pro wins are by submission and he has shown both confidence and power with his hands. There may be no welcoming committee worse for Dodson back to bantamweight than The Anvil.

“I’ve been dealing with bigger, stronger, quicker guys my whole time, my whole career,” he said. “Is John Dodson going to surprise me? I don’t think so. I’ve been fighting for almost 19 years. I’ve fought some big names in my career, I’ve done some big things in my career. I’m not taking anything away from John Dodson. He’s a top notch guy, he’s a gamer, but, at the end of the day, I’m going to go out there and get that W.”

Up next, Gamburyan travels to Tampa for UFC on FOX: Teixeira vs. Evans to tangle with “The Magician” Dodson. The Ultimate 14 winner at bantamweight has been busy inside the Octagon being a top ranked UFC flyweight and challenging for that title twice in a little over two years’ time. Regardless of weight, Dodson is known for his striking power, with the Team Jackson-Winkeljohn star’s lone UFC bantamweight bout being a first-round knockout of former UFC bantamweight champ TJ Dillashaw. 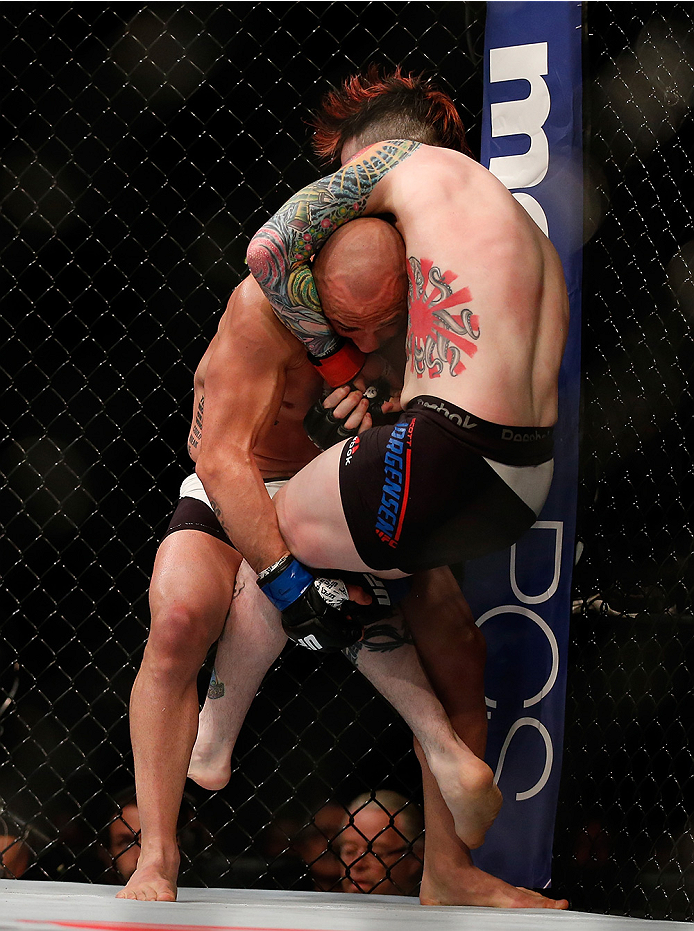 “I was looking for a fight to fight in February and no one stepped up,” Gamburyan said. “In March, no one stepped up. In April? I was calling out a lot of names. I guess some guys were hurt and some guys don’t want to fight me. I’m not going to mention names. John Dodson was looking for an opponent. Yeah, whatever, I’ll be your opponent. He’s a gamer. He’s a tough opponent. I feel like I perform better when I’m fighting a better and bigger name. John Dodson is my next opponent and I’m excited. I’ve trained hard and I can’t wait to go out there and fight. I’m going out there to prove I belong with the 135ers and I belong in the top 10.”

This Saturday, bantamweights will brawl as The Anvil meets The Magician. Besides belt possibilities, there are plenty of bonus possibilities for this bout, as Dodson vs. Gamburyan is simply can’t miss Octagon action.

“It’s obviously one of the most exciting fights on the card,” Gamburyan said. “When Khabib [Nurmagomedov] was fighting Tony Ferguson, that was the top fight, that was an amazing fight. Unfortunately, Tony got hurt and Khabib is still fighting, but we’ve got one of the most exciting fights on the card. Lyoto Machida and Dan Henderson, Rashad Evans and Glover (Teixeira) are good, but I feel like we can steal the show. The style matchup, the fast pace, it’s going to be exciting. Submission, knockout, decision - there’s a lot of ways this fight can go. If you’re an MMA fan, you need to tune into this fight. If you’re not an MMA fan, you should still tune into this fight because you will love it. Tune in April 16th, there’s going to be fireworks.