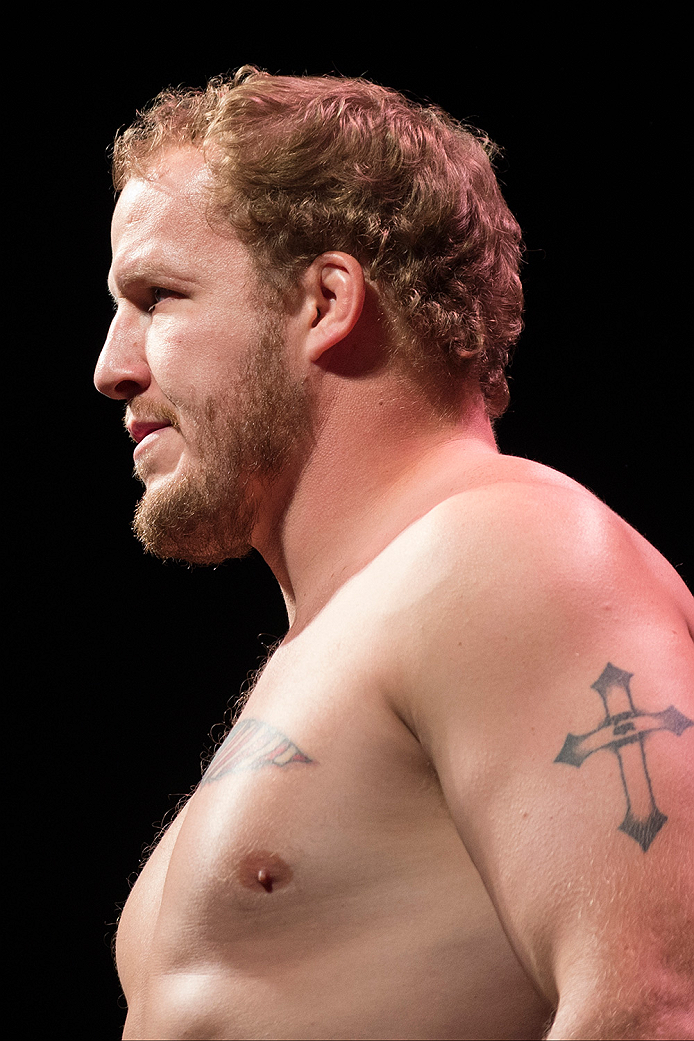 As humble as an individual may be, it still takes a certain amount of ego to be a professional athlete, and any hits to that ego are often hard to overcome. So when someone does take those hits and continues to move forward, that’s how champions are made.

Jared Rosholt isn’t a UFC champion yet, but he’s shown the determination that is needed to one day wear that gold around his waist. More importantly, he’s gone from mixed martial arts neophyte to young man on the verge of the top 15 in the heavyweight division, surviving those hard times when such an idea was a dream at best.

“It was really tough,” Rosholt said of his formative days in the sport, when he went from being the wrestler with the most wins in Oklahoma State heavyweight history to a budding MMA fighter who wasn’t having an easy go with the non-wrestling aspects of the sport. “I still remember to this day, it was two weeks into training MMA for the first time, and I got thrown into a boxing ring with two boxers, and went a round with each of them and I had no idea what I was doing. I hit the heavy bag with the coach a little bit, and that’s about it. And I just got in there and got tore up by both of them. I was so exhausted, so frustrated, and I thought ‘man, this might not be for me. This is just awful.’”

Many quit at this point, even though it’s a rite of passage for even the best of the game. Former Olympian and current light heavyweight champion Daniel Cormier talked of frustrating days in the AKA gym in San Jose, but he pushed through and became one of the best fighters in the world. Rosholt, 29, pushed through.

“It’s part of who you are,” he said. “If you’ve gone through all the wrestling and stuff, you start at the bottom, you work your way up, you get better and better, and it doesn’t happen overnight. You don’t get to where you’re comfortable and good overnight. So I stuck with it, and when you get better and get to the bigger time, hard work paid off. I still have a long way to go too. I feel like I’m at the bottom of my career still. I’m like high school moving into college – I’m not even a ranked guy. So I’m still learning a lot and working toward the top.”

A 13-2 pro record with five of those wins coming in the UFC is a more than solid start, but if he’s in high school and the top 15 is college, graduation day could be this weekend in Melbourne, Australia when he faces Stefan Struve. The UFC 193 bout is on the Pay-Per-View main card, a prime location for the heavyweights and an opportunity Rosholt wants to make the most of.

“This is the most important fight for me to date,” he said. “Anytime you can get somebody that’s ranked above you in the top 15, that’s really important. So this is a big opportunity. And it’s on a Pay-Per-View, it’s on the main card, it’s on the same card as two of the champs, so there will be a lot of eyes on me and it’s an important one.”

If you’re looking big picture, it’s great placement for Rosholt and Struve because they’re under 30 years old, a rarity for the division, with Struve being the only one in the top 15. So for the winner, it’s a showcase bout that injects some (fairly) young blood into the mix among the big men. Rosholt hopes it’s that, as well as the prelude to a bout with another fighter on the card.

“It’s not a bad thing that we’re matched up on the card, us both being younger for our division,” he said. “But I kind of feel like this is a four-man tournament – me and Struve and (Mark) Hunt and Bigfoot (Silva). That’s what I’m hoping, anyway – the winners match up and move forward. It’s a big opportunity for everybody.”

Rosholt has come a long way from those early days in the gym to hoping he gets one of the division’s top sluggers in Hunt or Bigfoot, but winning builds confidence like that, and in the days before his pro debut in 2011, everything started to come together.

“It was tough to know everything about one aspect of the sport and in the other, you felt like you didn’t have a clue about what was going on,” he said. “But over time I started to get better and better, and I could compete with the guys in the gym like my brother (UFC vet Jake). Todd Duffee also used to come train with me a little bit, and I got to where I could do a lot with him and that was pretty good for my first year into it. I gradually kept getting better and more comfortable with it, and I knew that I could get to where I wanted to be – which was the UFC – eventually. It was just going to take some time and hard work.”

Winner of two straight over Josh Copeland and Timothy Johnson, Rosholt will add some more experience to his knowledge bank when he faces the 6-foot-11 ½ Struve in Melbourne. Rosholt has already done the long travel thing, defeating Daniel Omielanczuk in Abu Dhabi and Soa Palelei in New Zealand. But fighting a nearly seven-footer? That’s a new one that his Team Takedown squadmates in Arlington, Texas have been trying to help him out with.

“We did all kinds of funky stuff,” the 6-foot-2 Rosholt said. “We had guys on stilts; one of the guys took all these flip-flops and cut them up and glued them to his boxing shoes. It wasn’t so serious, so it was fun. But we found one kickboxer who was here for three weeks of the camp that was 6-10, so he was close and gave us somewhat of a look, but you just can’t go out on the street and find somebody that’s seven-foot tall and say ‘hey, you know MMA?’”

When it was suggested a visit to the local basketball court might have helped, Rosholt laughed and thought of the Dallas Mavericks’ Dirk Nowitzki, but he’s been occupied with the start of the NBA season. All joking aside, Rosholt knows the importance of at least getting a feel for fighting someone Struve’s size, because if he goes in blind on fight night, winning his third straight will be an uphill battle.

“It was a good look (working with a 6-foot-10 training partner) because it certainly was different having that length, height and reach on me, and it’s a different feel everywhere,” he said. “But when it gets down to it, you have to get in there and figure it out, and get inside. That’s the only way I can do it to win against him. I can’t stand on the outside the whole time – I’ll never touch him from the outside. It would be like those cartoons where they’re just holding your head and you’re swinging at the air.”

Rosholt doesn’t sound too bothered about the obstacle in his way on Saturday night. He’s been there before with all the other aspects of the game and found a way through them. This is just another one, the cap to a good year and the prelude to an even better one in 2016.

“2015 has been a comeback year and it’s a chance to move forward and get ahead of where I was last year at this time,” he said. “This is a big opportunity to round out the year the way I want it to, and nothing will ruin my trip down under more than losing. So I’m very focused on winning.”