Takeya Mizugaki: The Only Goal is Gold

"My goal for this year is to get that title shot. That is all I am thinking." - Takeya Mizugaki 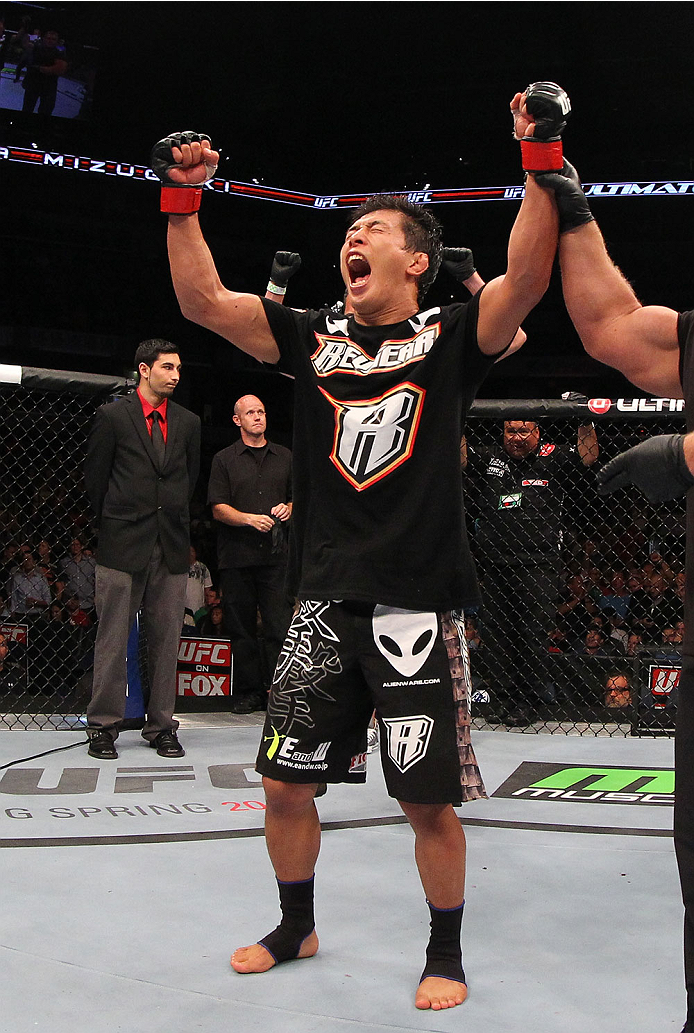 It’s often easy to forget that mixed martial arts isn’t like any other sport. You don’t get to pitch again in four days if you have a bad night in baseball, or come back to play a week later after a loss in football. In this sport, a loss leaves you with that bad taste in your mouth for months, while tumbling you back several steps in your quest to either get to a championship or into the big fights that will lead you there.

In other words, losses hurt. Yet on the flipside, a win can open doors to places that weren’t reachable before, and can often be life altering in terms of earning potential. So when you see the emotion of UFC bantamweight Takeya Mizugaki after his wins, it’s a reminder just how important the end result can be. And for the Kanagawa product, when that end result is a positive one, it moves him one step closer to his personal promised land.

“I am only thinking about one win at a time, and my goal is clear, which is to get that title shot against the UFC champion,” said Mizugaki through manager / translator Shu Hirata.

For a long time, it looked like that was just wishful thinking on the part of Mizugaki.

After making an immediate splash in his WEC debut in 2009 with a hard-fought Fight of the Night loss to champion Miguel Angel Torres, Mizugaki continued to battle the best the division had to offer, first in the WEC, and then in the UFC, but his performances were the epitome of inconsistency. Over his next eight fights, he went 4-4, alternating between wins and losses throughout.

But just when he seemed destined to be a mainstay in the middle of the pack at 135 pounds, he made a change in his thought process before his 2012 fight against Jeff Hougland.

“After I lost to Chris Cariaso via decision in Japan, I realized I have to be way more aggressive and I believe this approach shifted me in the right direction, so to speak,” said Mizugaki.

He isn’t kidding. After decisioning Hougland, Mizugaki won three more bouts without a loss, defeating Bryan Caraway, Erik Perez, and most recently, Nam Phan. The Phan bout was particularly enlightening, as he nearly stopped the steel-chinned Californian before slowing down late and settling for a unanimous decision win.

“I ran out of gas in the third round,” he admits. “After I knocked Phan down in the second round, I went for the kill but couldn't finish him. Instead, I ran out of gas so I was not too happy about that. But besides that I think I did well in that fight.”

He did, and the win earned him a number six ranking heading into his UFC 173 matchup with number ten Francisco Rivera this Saturday. This is going to be an old fashioned throwdown, and Mizugaki is ready for it.

“He is a hard puncher,” he said of Rivera. “And he is pretty good at executing the guillotine choke as well.”

The placement of the fight on the undercard of Saturday’s main event between bantamweight champion Renan Barao and challenger TJ Dillashaw isn’t lost on Mizugaki either, especially because an impressive win could make his case for a shot at the winner. And if such a victory is on the menu in Las Vegas, Mizugaki won’t be shy about asking for what he believes he deserves.

“Of course, I would like to ask for a title shot if I win this weekend,” said the 30-year-old veteran.

So how does he see Barao vs. Dillashaw playing out?

“This is a very difficult fight to predict,” said Mizugaki. “I think Barao is a better fighter overall, but Dillashaw is constantly improving, so if Dillashaw fights like how he did against Mike Easton for the entire five rounds, then this fight might go to Dillashaw's way.”

But no matter who wins, Mizugaki wants to be the one in that challenger’s position next, and if not after Saturday night, then certainly by the end of 2014.

“My goal for this year is to get that title shot,” he said. “That is all I am thinking.”