The Takeover - Conor TKOs Brandao in One 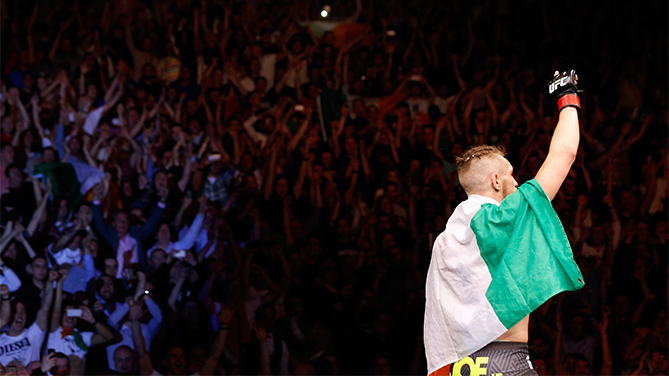 Pressure, what pressure? After weeks of build-up, Irish featherweight star Conor McGregor lived up to all the hype and all his talk - and in his hometown of Dublin no less - stopping Brazil’s Diego Brandao in the first round of their UFC Fight Night main event at the O2 Arena Saturday.

It was the most important win of the 26-year-old’s career, proving not just that he could carry a promotion, but that he could defeat a talented veteran in his first bout since knee surgery left him on the shelf since August of 2013.

“It was a clean sweep for the Irish,” said McGregor, one of four products of the Emerald Isle to win on the card. “We're not here to take part; we’re here to take over.”

That was evident from the start. The boos didn’t appear to rattle Brandao as he made his way to the Octagon, but with the crowd bathed in Irish colors, it had to be hard for the Brazilian not to be affected by the roars from the capacity crowd as the local hero waded through the crowd and into battle.

Once the introductions were made, the two surprisingly touched gloves, and once the fight commenced, it was McGregor nailing Brandao with a kick to the midsection. Brandao fired back, and after these initial exchanges, Brandao looked for a takedown but instead has to settle for a lock-up against the fence. McGregor reversed position, and he did so again in the second minute as “DB” took him to the mat. The two exchanged while on the canvas, Brandao looking for a leg lock as McGregor punched his way into the scoring column. With two minutes left, the two stood, McGregor pressing the action with punches and spinning kicks. In the final minute, McGregor stunned Brandao against the fence, and after a slight hesitation to make sure Brandao wasn’t playing possum, “Notorious” unleashed strike after strike, dropping his foe and bringing in referee Leon Roberts to stop the fight at 4:05 of the round.

Cummings was competitive in the opening round, but he had few answers for 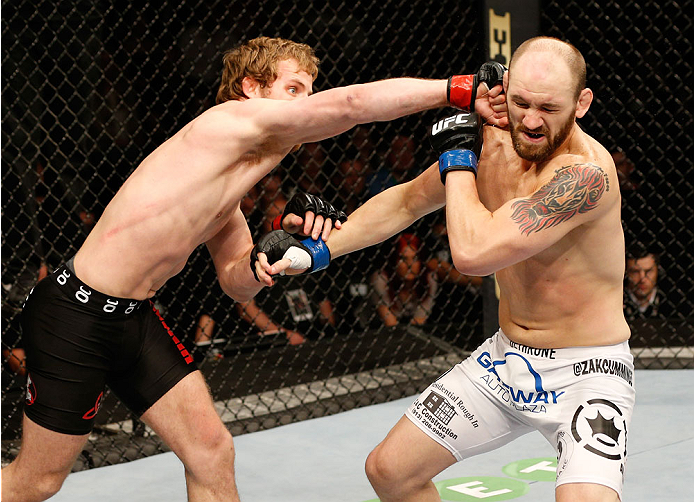 Nelson’s unorthodox striking style, as he ate several shots while being unable to land  own or get the bout to the mat.

Nothing changed for much of the second round, but suddenly with a minute remaining, Nelson struck, getting Cummings to the mat effortlessly. He immediately look the American’s back, bloodied his nose, and then sunk in the rear naked choke that forced Cummings to tap at 4:48 of round two.

Flyweight rivals Ian McCall and Brad Pickett didn’t deliver the explosive action many expected, but in a tactical three-rounder, it was McCall emerging with a well-deserved unanimous decision victory.

McCall kept Pickett guessing for much of the first round, using his movement, quick leg kicks and occasional rushes accompanied by left hands to the face as the Londoner pursued. By the end of the frame, Pickett started timing the rushes with hard uppercuts that allowed him to get closer to the elusive “Uncle Creepy.” 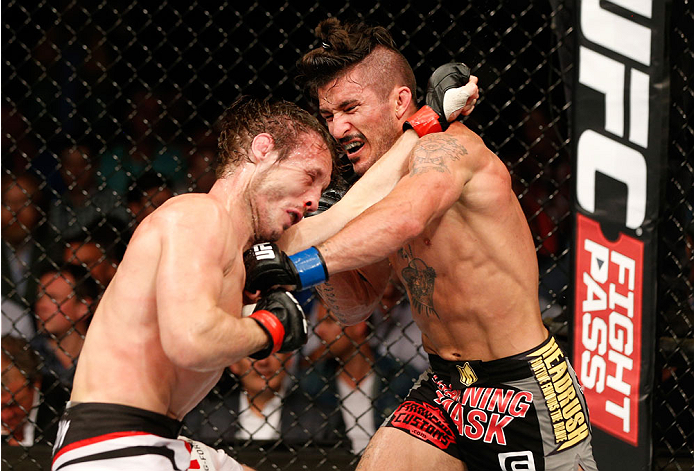 McCall began round two with a takedown, Pickett jumping up as soon as he hit the deck. McCall’s second takedown moments later lasted a little longer, but Pickett still made it to his feet without having to fend off any significant danger. For the rest of the round it was the same cat and mouse game continuing, with both fighters having their moments of success, but neither doing enough to pull away.

With McCall seemingly hurting his right hand in the previous round, as he kept shaking it, the Californian still stuck to the game plan, relying on his left hand and his kicks to lead the action. With 1:45 left, McCall upped the ante with a takedown of Pickett, a key move in a close fight, and it was his subsequent mat work that left no doubts on the scorecards.

Northern Ireland lightweight Norman Parke spoiled the return of Japan’s Naoyuki Kotani, picking up his first UFC finish in the process as he scored a second-round TKO victory in the main card opener. 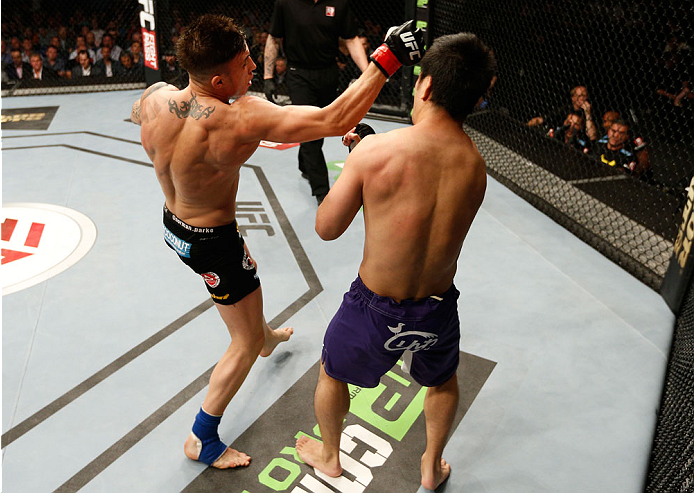 Parke had a good first round offensively and defensively, as he kept Kotani from bringing the fight to the mat while peppering his foe with strikes throughout. In the final minute, Parke’s takedown defense allowed him to take the fight to the canvas, and he ended the frame with a blistering series of elbows.

Taking the bout to the mat in round two, Parke’s ground strikes extended his lead, and his defense remained tight as he eluded a leg lock attempt from the Japanese veteran. But after the next trip to the mat, Parke took his foe right back there, and this time he finished the bout with more unanswered ground strikes. The official time was 3:41 of the second stanza.

Relive all of the action on UFC FIGHT PASS!