Takanori Gomi - Back on Track

"All I can do is to keep fighting the way I used to so that I don’t let people down." - Takanori Gomi 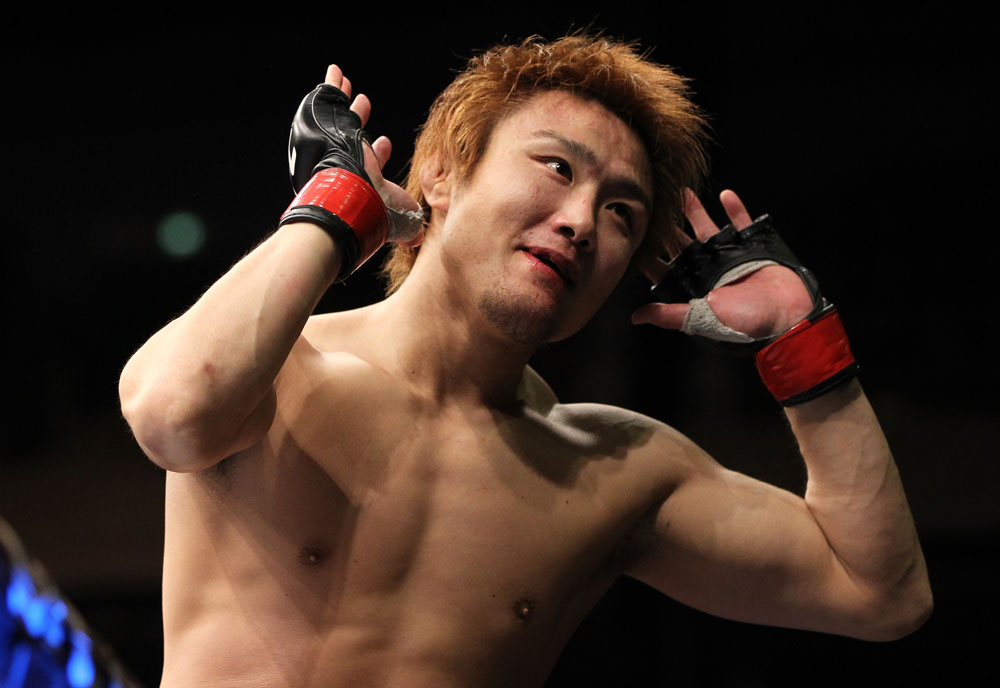 After 32 professional mixed martial arts wins, the PRIDE lightweight championship, and recognition as one of Japan’s best ever in the sport, it would be understandable if winning fights became a bit of a routine for Takanori Gomi over the years.

The UFC was a tough nut for Gomi to crack though, and with a 1-3 Octagon record entering his UFC 144 bout with countryman Eiji Mitsuoka in February, winning wasn’t just going to be a perk after a long training camp; it was a necessity. Add the fact that he was fighting in his home country for the first time as a member of the UFC roster, and the urgency was even more apparent.

Yet Gomi kept his characteristic cool, even knowing that he might not be at a hundred percent heading into the bout with the veteran Mitsuoka.

“I had an injury prior to the fight that made me a little nervous, but I believe that I had an advantage in the Octagon because it was my opponent's first fight in the UFC,” said Gomi through translator / manager Mizuka Koike.

And whether it was that experience, his still-potent punching power, or the stars all aligning at the right moment for one of Japan’s greatest MMA stars, Gomi got victory number 33, stopping Mitsuoka in the second round in the same Saitama Super Arena where he had defeated the likes Mach Sakurai and Jens Pulver in PRIDE. When it was over, his joy and emotion were evident, and the way he felt, it was simply mission accomplished.

“I felt like I had nothing to lose, and I just wanted to show the audience everything that I have.”

He did, but when asked what the win meant to him, his response isn’t about him, but about his team and his fans.

“I was so happy that I could show my victory to my sparring partners and people who supported me over the years,” said Gomi, who broke a two-fight losing skid. Now there’s an entirely new light on the career of “The Fireball Kid,” and if the 34-year-old from Tokyo can defeat Mac Danzig this Saturday in Macao, it will be his first two-fight winning streak in the UFC, and a firm step in the direction of his ultimate goal, which he says is “To be the champion of UFC.”

Danzig will be a stern test though, as the Californian always shows up ready to fight, and with a desire to break a win-loss-win-loss pattern of his own, the former Ultimate Fighter winner has his own championship ambitions to chase after. Gomi remembers Danzig from his 2007 PRIDE loss to Sakurai, and when asked the difficulties he presents, the Japanese standout points to “his aggressiveness and how he rushes toward his opponent,” as factors to be aware of.

At this point in their careers, Gomi and Danzig would probably be seen as a pick ‘em fight, but Gomi will have a couple advantages, mainly that he is fighting in Asia, a preferable locale for him, and that he finally feels at home in the Octagon after years fighting in the ring.

“I finally felt like I could relax in the Octagon since I fought in Japan,” said Gomi, who is at his most dangerous when he’s loose, comfortable, and letting his hands fly. As for the logistical battles, “I don't have to travel long when I fight in Asia,” he said. “That's a huge difference from fighting in the States. Also, it is easier for me to find food that I like in Asian countries.”

With that out of the way, all that’s left is the fight, and Gomi promises a good one.

“I hope both of us will be in the Octagon in the best condition,” he said. “I’m going to show an aggressive fight and make the audience loud.”

So business as usual then?

“All I can do is to keep fighting the way I used to so that I don’t let people down.”