Taisumov wants the Top 10 with a win in Moscow 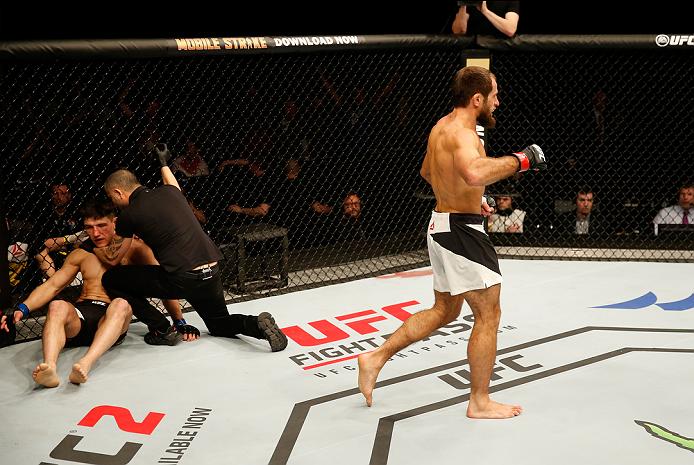 Despite losing a unanimous decision to Michel Prazeres, Taisumov’s record hasn’t had another blemish.

Now 6-1 since his promotional debut (26-5 overall), Taisumov has a strong qualification on his UFC resume and his last five opponents to use as references: knockout power.

Fight Night Moscow is a FIGHT PASS Exclusive! Start your free trial today and catch all the action!

After his fourth consecutive knockout victory, Taisumov stood in the center of the Octagon and broke his humble silence.

“UFC, how many knockouts, TKO’s do I have to do to get the top 10?” Taisumov demanded.

Behind the scenes, Taisumov reached out to anybody at the top of the lightweight division who would listen and after he knocked out Felipe Silva in less than 90 seconds in his most recent bout, he aired out the conversations.

When Taisumov’s frustrations boiled over inside the Octagon following his fifth straight knockout victory, nobody was safe.

“I speak with number 8 ranking guy Michael Chiesa, he says if I beat someone else, he’s going to fight me but after that I finished three guys in a row,” Taisumov said. “He don’t answer anymore. Let’s take Anthony Pettis. He says I’m not famous enough. Nate Diaz says if the UFC pays him $20 million he’s going to fight me, even in my home country. But I think he spoke too much.”

Taisumov hasn’t been keeping his callouts inside the Octagon or the lightweight division adding that Donald Cerrone is “a bum” who also avoids his fights.

Standing between Taisumov and his potential shot at the top 10 is 28-year-old Desmond Green, a 21-7 fighter who has never been knocked out. Although Taisumov has an extensive wrestling background, Green has only been submitted twice. With only one submission victory to his name, Green may give Taisumov the fight he has been looking for.

Contract is signed, not a Top 10 opponent but I respect that he accepted the fight and he'll get a nice welcome present in the cage in Moscow After this fight the @ufc will have no other choice left, will leave no doubts for Top 10 #Taisumov #Berkut #ReadyForEveryone #UFC pic.twitter.com/cqruwHK3TM
— Mairbek Taisumov (@Taisumov155) July 28, 2018

Despite not being the top 10 fighter Taisumov has been asking for, Green is also trending up and expressed interest in placing his name in the Top 20, proving Taisumov isn’t the only hungry lightweight.

What’s on the other side of UFC Fight Night Moscow is to be determined, but what’s guaranteed is Taisumov vs. Green will be battling to continue their upward trend. And while Green has remained reserved, Taisumov made his intentions very clear.

“I’m here to smash anyone who steps into the Octagon,” Taisumov said.