In the nearly 26-year history of the Ultimate Fighting Championship, there have been less than 50 individuals who have strung together more consecutive victories than the 31-year-old lightweight
By E. Spencer Kyte, on Twitter @SpencerKyte • Sep. 4, 2019

There have only been 46 fighters to amass a longer winning streak inside the Octagon than Mairbek Taisumov.

That might not sound particularly impressive at first blush, but think about it a little: in the nearly 26-year history of the Ultimate Fighting Championship, there have been less than 50 individuals who have strung together more consecutive victories than the 31-year-old lightweight, who goes in search of his seventh straight win against Diego Ferreira Saturday night in the opening bout of the UFC 242 pay-per-view main card.

Scrolling through the list of athletes to win seven or more consecutive bouts inside the Octagon is like a roll call of champions and contenders, with only a few unexpected names cropping up here and there to further highlight just how difficult it is to put together a lengthy run of success at the highest level.

Given those parameters, one would think that a fighter in Taisumov’s position would enter this weekend’s pay-per-view with a little more fanfare, but circumstances have conspired to keep the streaking standout positioned under the radar.

First and foremost, he competes in the loaded 155-pound weight class, where getting noticed and making a run towards the top of the division are exponentially harder. Secondly, Taisumov has been limited to a single appearance each of the last four years due to various issues, making it even easier for the talented striker to get swept aside by the crush of action that constantly passes through the Octagon.

“Believe me, I’ve had to deal with more and bigger problems in my life, but here I am, still going through good and bad times without giving up on my dreams and fighting on a great event,” said Taisumov, who is 7-1 overall in the UFC, including wins over Alan Patrick, Damir Hadzovic and Desmond Green. “Sometimes when you're patient, good things will happen and if they don't, they simply weren't good and meant for you.”

Having your career stunted limited to competing on a handful of events could understandably build resentment in an athlete, especially one like Taisumov who is already in his 30s and competing in the most talent-rich division in the sport.

You hear it all the time that these athletes only have a small window in order to maximize their opportunities and with each year that passes where he’s only logging a single appearance, that window closes a little more for “Beckan.”

But rather than grow hardened or disheartened, Taisumov has maintained a positive outlook, choosing to focus on the one thing he can control: being ready to compete whenever the UFC calls. 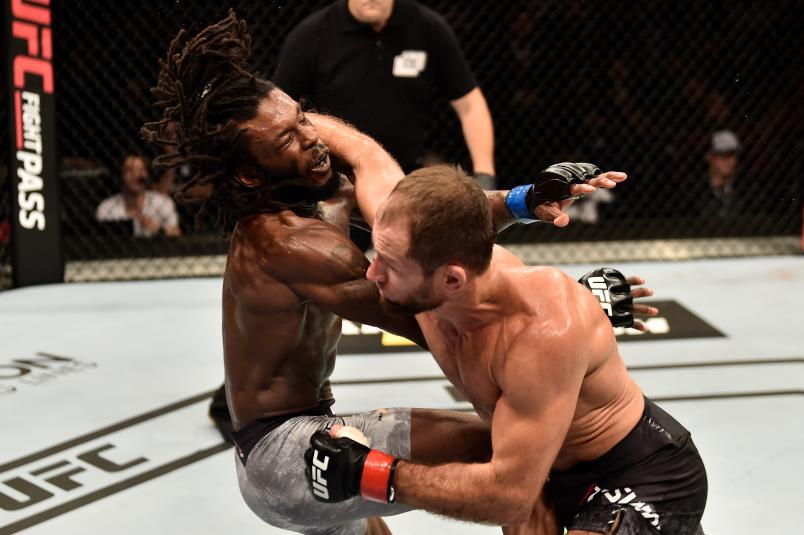 “Some things in life you can't change,” he said of the various hurdles that have limited him to five appearances over the last four years. “All I can do is try to face my problems and hopefully solve them. My manager Sufyan Cultrera is working together with new lawyers on my visa application and hopefully this time we'll be successful.

“I'm a fighter, not a lawyer, not an immigration officer, not a politician — all I can and will do is train, train and train again,” he added. “I have to make sure that I'm able to fight anytime the UFC wants me to fight and ready for whomever they put in front of me.”

This time around, the man standing opposite Taisumov inside the Octagon is Ferreira, another streaking lightweight who has struggled to break through into the greater MMA consciousness despite a four-fight winning streak that includes wins over Olivier Aubin-Mercier and Taisumov’s close friend, Rustam Khabilov.

The duo open up the lightweight-heavy main card, and with so much attention being paid to the division this weekend, one could argue Saturday’s pairing is the biggest fight of their respective careers, though Taisumov isn’t ready to go that far.

“Diego is a good fighter and I treat every opponent with respect,” he began, offering his opinions on the man he’ll face on Saturday. “But he beat Rustam and therefore I didn't even think a second when my manager called and said, ‘Will you fight Diego?’ It's going to be like payback fighting him because every loss for my brother is like a loss for me.

“Whether it's the most important fight of my career, I wouldn't say so,” Taisumov continued. “For me, every fight is important. I treat every fight with same importance because you never know what tomorrow will bring. But it's a packed fight card and fighting on this card with many other brothers makes me feel great.”

And the surging lightweight who completed his training camp at Tiger Muay Thai knows a victory that a win over Ferreira is imperative when it comes to putting himself in a position to reach his goals of proving he’s one of the best fighters in the world.

“I will do what I always do: step inside the cage and give 100%,” he said when asked how he sees this weekend’s main card opener playing out. “I'm prepared for a war.”

And if all goes well at UFC 242, Taisumov already knows when he would like to return and it’s much sooner than next year, not that he’s trying to limit himself.

“I heard the UFC is coming to Moscow in November,” he said. “When everything goes well, that would definitely be an option, but I fight anywhere, any time and against anyone and the UFC knows that.”