Tai Tuivasa Won’t Back Away From A Challenge

Coming off five straight knockout victories, and a win over Derrick Lewis in “The Black Beast’s” native Texas, it looked like there was nothing that could stop the shoey-filled run that Tuivasa was on.

In the late moments of the second round, Tuivasa landed a vicious right hook that sat Gane up against the fence and left thousands of French fans in distress. But Gane mounted a comeback, and began picking apart Tuivasa on the feet, eventually overwhelming him en route to a TKO victory in the third round.

“It was a great experience, it was a part of history,” Tuivasa said. “It was really cool to be a part of it. I gave it my all, it just wasn’t my day, and I can walk out with my head held high, but I definitely want to get back in the win column and go from there.” 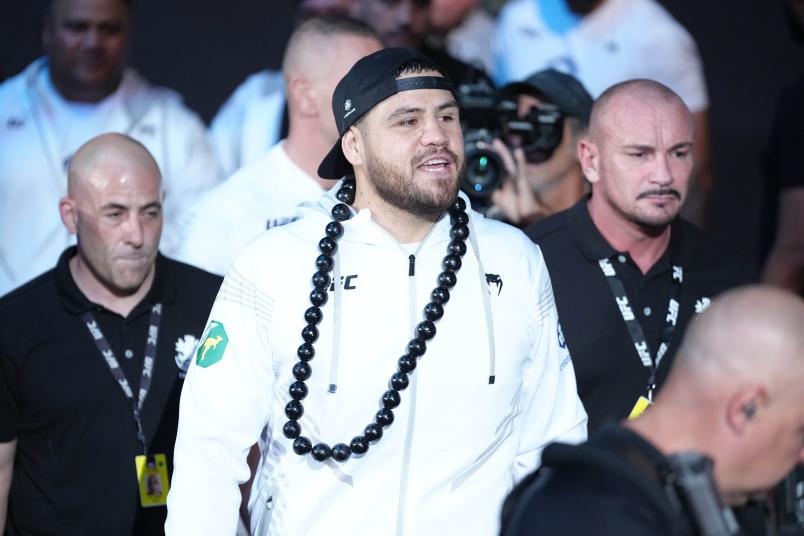 Tai Tuivasa of Australia walks to the Octagon before his heavyweight fight against Ciryl Gane of France during the UFC Fight Night event at The Accor Arena on September 03, 2022 in Paris, France. (Photo by Jeff Bottari/Zuffa LLC)

“We’re in the Top 5 of the UFC, we’re up here for a reason. I’m definitely looking forward to having another go with him again and showing what I’ve learned from it.”

Tuivasa gets the opportunity to show any improvements that he’s made since September against Sergei Pavlovich, a rising heavyweight contender who punched his ticket into the division’s Top 5 with a first-round TKO against Lewis at UFC 277: Peña vs Nunes 2.

While heavyweight champion Francis Ngannou heals from his knee surgeries, a win for either fighter this weekend could put them in prime position for a title shot.

Taking his family on vacation around Europe after his bout with Gane, where Tuivasa joked he, “f***ing spent a lot of money,” fans can expect a hungry “Bam Bam” eager to get his hands on a Performance of the Night bonus.

“Fight bonus, extra money,” Tuivasa said of his goals fighting Pavlovich. “I come here to fight for money so if I can get the bonus, woo.

“He’s obviously a scary dude, everyone’s kind of scared of him. That’s why they offered him to me. He’s a banger, he’s knocking everyone out, so I found it an exciting fight. I like to entertain the fans and give them a show and I think that’s what we’re both gonna do. My fighting style is it’s either me or him and I’m ready to go.”

Even though Tuivasa is just one or two wins away from getting a crack at the coveted title, a somber tone in his fight week interview suggests that the Australian may take a brief pause in action after his bout this weekend.

Recently traveling to Dubai for his many training camps, six in under two years, Tuivasa vows to spend more time with his son and family around the holidays.

“Dubai’s been really good for me the past two years, especially through COVID,” Tuivasa said. “I’ve been going really hard the last two years. I miss home. My son’s getting older now and I’m definitely looking forward to going home and just getting back with the family.”