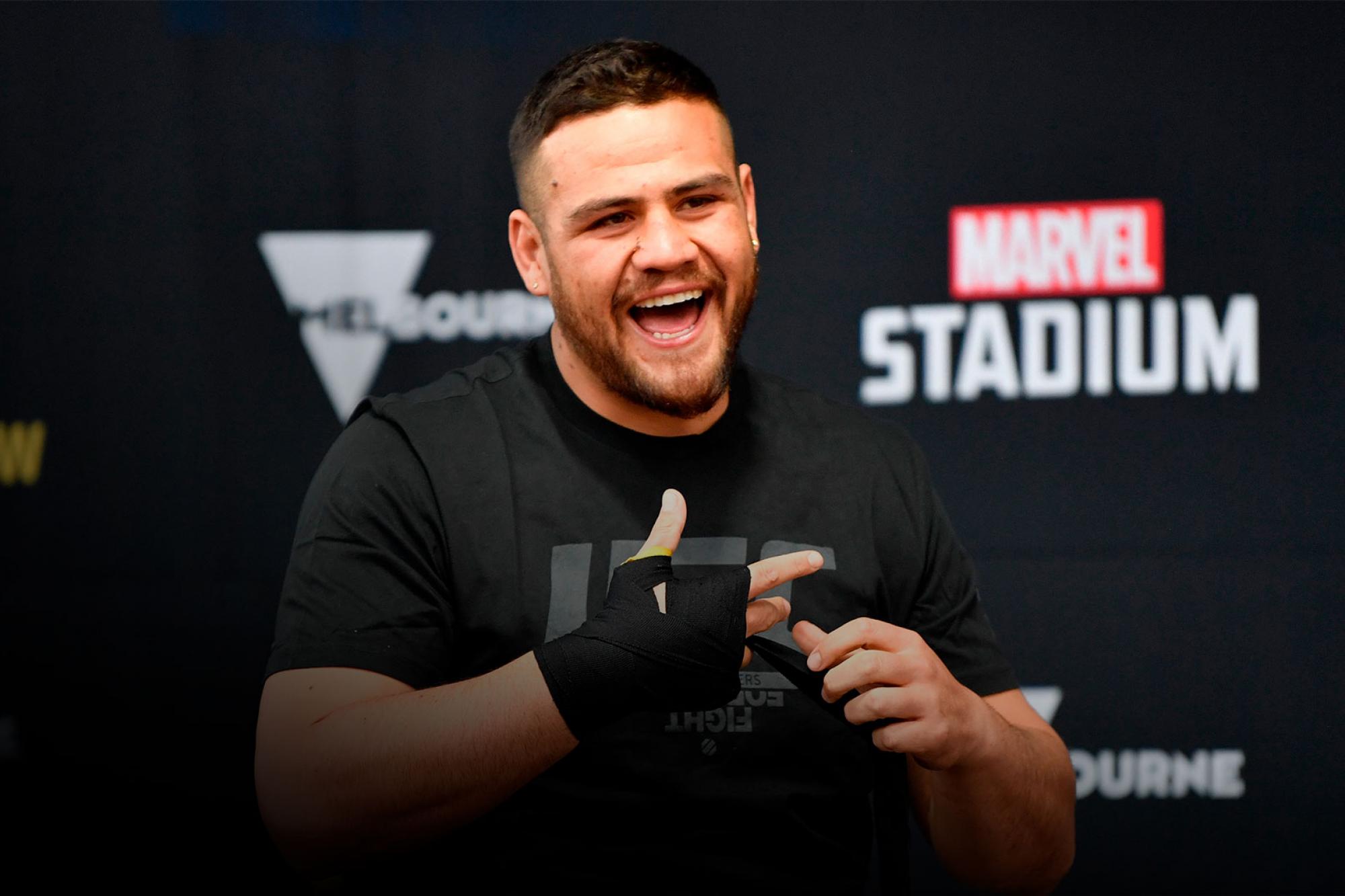 Tai Tuivasa Ready to Get Back on Track

The man they call “Bam Bam” arrives at UFC 254 with the mindset, the training and some advice from a legend
By UFC Australia Staff • Oct. 20, 2020

Australian heavyweight Tai Tuivasa is more focused than ever on making his mark in the UFC.

After he suffered back-to-back losses in 2019, pushing his current skid to three fights, some fans worried we might not see “Bam Bam” compete inside the Octagon again. But this is one fighter you should never count out.

“I’m back and I’ve done a lot of work this year,” says the 27-year-old, who will face Stefan Struve at UFC 254. “I’m coming off losses, so it had to be a different sort of fight camp. I’ve worked a lot on my mental state and now I’m feeling really good. I’m ready to get out there and do my thing.”

Tuivasa is no stranger to adversity. “I’ve lost worse things in life,” he told the media after a previous defeat. “Family, people you love, opportunities, and friends. A fight’s nothing.”

Hailing from some of the meanest streets in Western Sydney, he grew up running with a tough crowd. That, and the fact his dad was a boxer, meant fighting was second nature. At age 19, he looked set for a career as a rugby league player, but he’ll be the first to admit the sport wasn’t his passion.

“I was getting sent off every other game for fighting. It never really suited me, especially at that professional level. I love fighting. I enjoy it more than footy, so I went with my heart.”

“I was going down a wrong path at one point in my life. The fact that I can do this in front of the world is a blessing.”

Tuivasa doesn’t dwell on any dark days – he prefers to look forwards rather than backwards.

“Life’s pretty good right now, brother,” he enthuses via satellite. “I’m lying on a sunbed on Fight Island, getting a tan.

“It’s been a rough year with COVID-19, but the UFC has really pulled it off with these events. Fight Island is awesome!”

Stefan Struve, Tuivasa’s UFC 254 opponent, is the tallest UFC fighter of all-time at 6-11 ½, and he sports a victory over current heavyweight champion Stipe Miocic. However, the Aussie remains relaxed about the whole deal.

“Struve’s experienced – they always give me these experienced guys,” notes Tuivasa. “He’s seen everything, so I think he’s just going to come out and do what he usually does.”

Fortunately, “Bam Bam” has received advice from another Sydney-based fighter of Samoan descent who handed the towering Dutchman one of his most spectacular losses.

“Mark Hunt and I are very close. We’ve trained together and talked a lot about how to fight [Stefan]. But talking is talking and fighting is fighting – two very different things. All I can say is that it will be entertaining.”

More from UFC 254: Fighters On The Rise | Where We Stand: Lightweights

Tuivasa sees himself as something of a dying breed in modern MMA, less of a technician and more someone doing it out of sheer love. “There’s not a lot of straight-up fighters anymore,” he declares. “There’s a lot of mixed martial artists, but I represent the people who are just in it to blue.”

It's statements like that which have made the heavy-hitting youngster a fan favourite, along with his habit of joking around…and drinking the occasional beer out of a stranger’s shoe. It’s a kind of everyman appeal that he embraces.

“Yeah, I’m nobody. I’m a Joe Blow no different to any other bloke,” he laughs. “I’m just lucky that I get to whack some heads in front of the whole world. That I get the opportunity to represent me and my area.”

Speaking of which, another reason for Tuivasa’s good mood of late is that his local rugby league team in Australia’s top competition, the Penrith Panthers, have made the grand final, which will take place mere hours after UFC 254. “Man, I’m so rapt about it,” he says. “I’m fighting on the same day. It’s awesome. It’s the year of the West!”

But back to more pressing matters, how does he picture the bout with Struve going down?

“I’m ready to do three fives if I have to and go the distance. But I’ve always got that killer instinct in there. If I see an opening, I’m definitely going to grab it with both hands.”

And if he gets the big W to put his UFC career right back on track? We’re picturing beer and shoes…

“We all know how that goes down,” laughs Tuivasa. “But this will be times fifty! ’Cos it’s been a long time coming. All I can say is I’m ready. I’ve dotted my Is, I’ve crossed my Ts. I’m ready.”