At just 26-years-old Tuivasa knew he would face adversity in the UFC. Now that he's experienced bumps and bruises he believes it's time to dish out some hurt at UFC 243.
By E. Spencer Kyte, on Twitter @SpencerKyte • Oct. 3, 2019

Tai Tuivasa makes his sixth appearance in the Octagon this weekend when he takes on Serghei Spivac in the middle bout of Saturday’s UFC 243 pay-per-view main card emanating from Marvel Stadium in Melbourne, Australia.

Boasting a 3-2 record in his first five outings, the man who introduced North American audiences to “The Shoey” rocketed into the rankings on the strength of three straight victories, capped by a unanimous decision win over divisional stalwart and former champion Andrei Arlovski, but the last year hasn’t been as fruitful for Tuivasa.

Last December, he suffered the first setback of his career, a second-round stoppage loss to former champ and perennial contender Junior Dos Santos, and six months later, the affable heavyweight dropped a unanimous decision to Blagoy Ivanov to put him on a two-fight skid.

“That’s the fight game and I know that,” said Tuivasa, reflecting on the tandem defeats that carry him into this weekend’s meeting with Spivac. “There’s a winner and there is a loser, so it’s not really hard for me because I know I’m going to win or lose, either one. But as losses come, I’ve got to learn and adapt and I think I’ve done well, picking at myself and my own game and I’m looking forward to showing what I’ve done on Saturday.”

That includes, surprising as it may sound, adding a strength and conditioning routine to his training camp for the first time.

“It’s all weird stuff, but it’s fun,” laughed the 26-year-old, who stayed home in Sydney to prepare for this weekend’s bout. “I feel good. I feel strong. I’ve been focusing on myself. I don’t care about my opponent or anyone else; I’ve just been sharpening all my tools and getting better at what I need to get better at and I’m ready.”

Because of the way he burst on to the scene with impressive stoppage wins and a decision victory over Arlovski in his third Octagon appearance, it’s easy to forget that Tuivasa is just now approaching the two-year anniversary of his promotional debut and is still only 12 fights into his career.

While an increasing number of competitors are reaching the biggest stage in the sport with less experience than their predecessors, very few go from winning on the regional circuit to headlining a UFC event against a former world champion in a little over two years, as Tuivasa did. 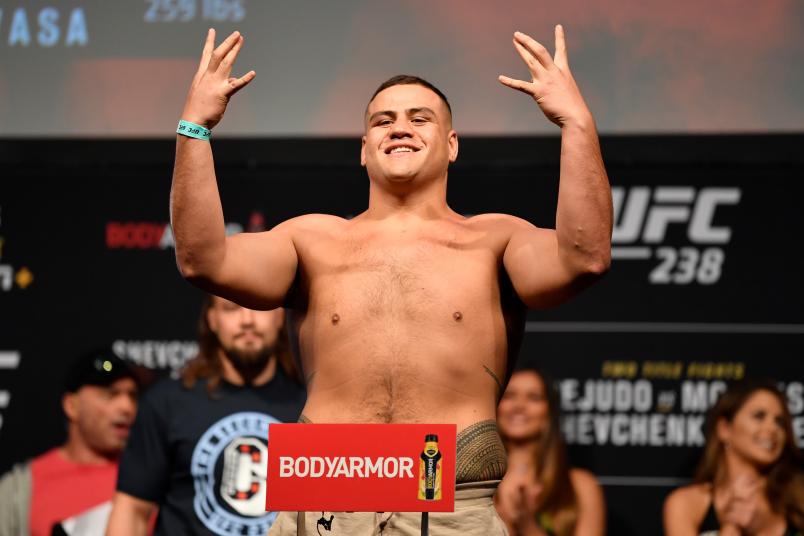 ai Tuivasa of Australia poses on the scale during the UFC 238 weigh-in at the United Center on June 7, 2019 in Chicago, Illinois. (Photo by Jeff Bottari/Zuffa LLC via Getty Images)

What’s more is that he entered that bout with Dos Santos last December in Adelaide with plenty of people expecting him to continue his winning ways, which speaks to the immediate impact he’s had on the heavyweight ranks and the potential observers saw in the former rugby league man.

On the heels of his consecutive losses, Tuivasa slid back in the rankings, entering this weekend’s event stationed at No. 14. But where some see a competitor who rose fast, stumbled and now has been cast into the shadows, Tuivasa understands that it’s all a part of the journey, one he’s eager to continue Saturday in Melbourne.

“I’ve been maturing as a fighter — learning when to go and when not to go and really mixing it up, like mixed martial arts,” he said. “I’ve never really did standup and ground and mixed it all together, but now I’m getting a real good hold of it, I’m practicing more and I’m excited to get back in there and have some fights.

“Coming into this whole sport, I had nothing really but heart and the love of fighting; I love punching faces,” he said. “I’m a person that needs to learn through doing — if I don’t do it, I won’t learn. I’m not a person you can just tell (something to) and I’ll pick it up; I’m more of a “have to lose in front of the whole world in order to pick up on some weak spots” (kind of guy).

“But that’s life and f*** I’m 26 and most of these heavyweights are old,” he added with a laugh. “That’s no excuse though. To me, it’s more of a reason why I should be beating these guys, but we live and we learn and I’m just ready to put this guy in the dumps.”

UFC 243 is special to Tuivasa for a number of reasons, chief among them that he gets to step back into the cage and punch someone, in this case, Spivac, in the face again for the first time in five months, and that he gets to do it on home soil in Australia.

But it’s also exciting for Tuivasa because after being shepherded along in his transition into mixed martial arts by the likes of James Te Huna, Mark Hunt and UFC light heavyweight Tyson Pedro, who also happens to be his brother-in-law, the affable big man is now the one showing someone else the ropes, as Saturday’s main card gets underway with the promotional debut of his close friend and training partner, Junior Tafa.

“That’s my brother,” he said Tafa, who carries a 3-0 mark into his bout with Contender Series alum Yorgan De Castro and profiles similarly to Tuivasa when he first arrived on the scene in November 2017. “We do it as a team because that’s our goal — to make it as a team. 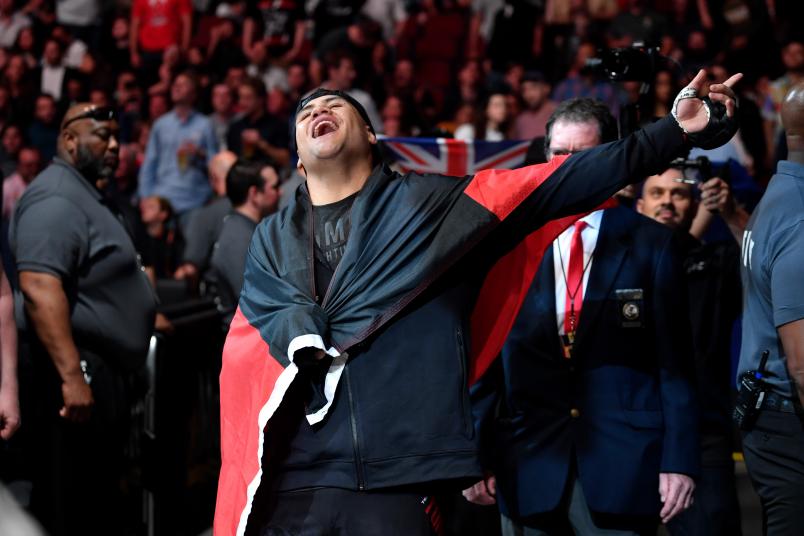 Tai Tuivasa of Australia prepares to enter the Octagon prior to his heavyweight bout against Blagoy Ivanov of Bulgaria during the UFC 238 event at the United Center on June 8, 2019 in Chicago, Illinois. (Photo by Jeff Bottari/Zuffa LLC via Getty

“We’re all trying to get in there. We want to be up there and be known as some of the best in the world and we’re going to continue to push and help each other on this journey.”

And after a year of disappointing results, Tuivasa is chomping at the bit to resume his journey and get back to doing what he does best on Saturday night in Melbourne.

“I’m happy to be out fighting in front of my people again and ready to get this win and get back on line,” he said. “I just want to get back to my style — get in there, be the aggressor and just hurt him. That’s my style, that’s what I’m good at.”