Tafon Nchukwi Is As Confident As Ever Heading Into His UFC Fight Night: Smith vs Spann Against Mike Rodriguez.
By THOMAS GERBASI, ON TWITTER @TGERBASI • SEP. 10, 2021 • Sep. 10, 2021

For someone who can strike fear in the heart of an opponent with one punch or kick, light heavyweight prospect Tafon Nchukwi is one of the most laid-back folks you will ever have the pleasure of meeting.

He is a professional prizefighter, though, so it isn’t surprising that whether he wins or loses, he will have plenty of friends and family members letting him know what he needs to do better on fight night. But in keeping with his personality, “Da Don” doesn’t get upset or flustered; he just takes it all in and moves along.

“My family members are always telling me what to do when I'm in there, regardless,” he said. “I just accept it because I know they're saying it from a good space in their heart, so I don't really take any bad intent from it. They point out the most obvious stuff and I'll be like, oh wow, okay. I'll try that next time. But it's the most obvious stuff, like maybe next time you should punch him. (Laughs) Okay, I'll do that.”

Currently preparing for a September 18 meeting with Mike Rodriguez in Las Vegas, Nchukwi is in an unfamiliar position in this training camp, as he is coming off his first pro loss to Junyong Park. Yet the majority decision defeat didn’t drop the up and comer’s status as a fighter to watch or his approach to the sport.

“My mindset is still the same; I'm not gonna lose,” he said. “Regardless, I'm gonna go in there and give it everything I do have. I feel like you have to go in there with that. You can't go in there with doubts in your mind. When I go in there, I'm going there to win.” 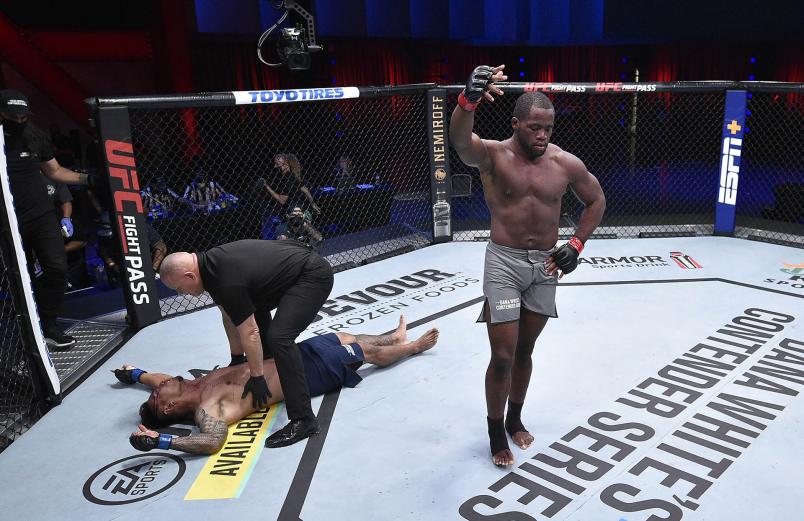 Wanting it and pulling it off when it matters are two different things, and the 26-year-old Cameroon native knows it, so to make sure he hits his mark, he relies on his work ethic to get the job done.

“We're not where we want to be at, but we're in the UFC, so that's the first step,” he said. “Now we're gonna keep on grinding.”

Nchukwi is in a different situation than most of his peers in that he got the call to compete for a UFC contract on Dana White’s Contender Series after just three pro fights. That’s a lot to ask for anyone, but as he prepared to go to Vegas for his bout against Al Matavao a year ago, he had no doubt that he was ready.

“I thought, I'm getting this and I'm taking it to the top,” Nchukwi recalls. “The team I have, they're good at building you up, not only physically, but mentally, and they get you prepared for any situation. I was definitely ready to go in there and take it to the top. And nothing has changed in that mindset. I wasn't nervous when I got in there.”

A highlight reel second-round knockout of Matavao proved that he was right, and that he was ready for the UFC contract that followed. Then again, with veteran coach Lloyd Irvin in his corner, he knew that he wasn’t going to be thrown into deep waters if Irvin didn’t think he could swim. 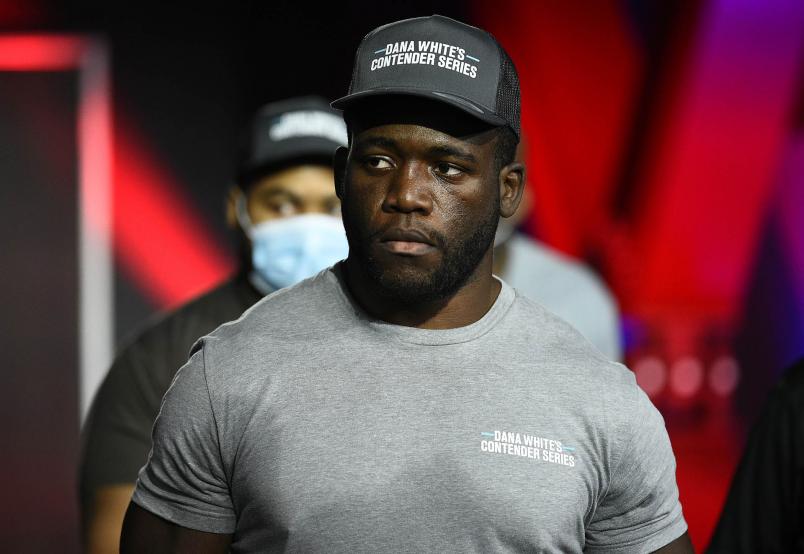 “That's a world of confidence, because I know the route that he chooses to take before he lets his fighters fight,” said Nchukwi of Irvin. “He's not gonna put you out there if he doesn't feel like you're a good representation of the team or if you’re someone who's gonna go out there and get hurt. A lot of people come through, talking about wanting to be fighters, and they're still there training because Master Lloyd doesn't think they're ready yet or they're not as dedicated as they're saying they are. So for him to have that confidence in me is definitely a boost and it means a lot.”

It also means that just because he’s in the big show, that doesn’t mean he’s getting any special treatment. In Maryland, the workouts are as intense as ever.

“They never stop,” he laughs. “It's an everyday thing. You come in there, you're coming in there to train.”

That shows up on fight night, and Nchukwi expects it to do so again when he faces the veteran Rodriguez, an opponent he expects to be willing to stand and trade with him.

“I know he's a guy who's definitely gonna show up in there, especially with his fighting style,” Nchukwi said. “I know he's gonna come in there ready to bang. It's definitely a good matchup.”