Tae Hyun Bang: Back to Basics 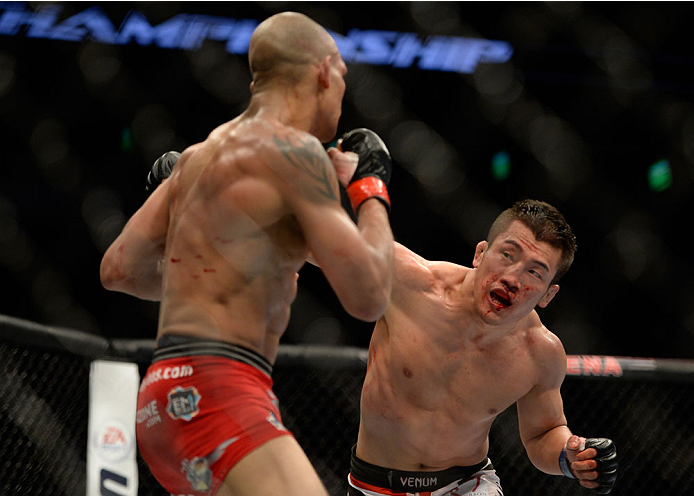 With the UFC heading to Seoul for its first event in South Korea this Saturday, the stakes have never been higher for the local fighters competing on the card and for the sport in general in the country. But for the members of Korean Top Team, it’s business as usual once it’s time to train.

“It's the same,” laughs lightweight Tae Hyun Bang. “Everyone is always training hard.”

Bang, who faces American Leo Kuntz, is joined by teammate Dongi Yang on this weekend’s card. Another KTT squad member, Hyun Gyu Lim, was also scheduled to fight until an injury forced him off the card. Each member of the seven-strong Korean contingent undoubtedly has their own individual motivation heading into their bout, but collectively, there is an air of excitement about having the Octagon in their home nation.

“Fighting in front of Korean fans is definitely a plus in terms of motivation,” Bang said. “I get all the goodwill and good wishes from the Korean fans, and it motivates me to train hard and fight hard. All the Korean fighters are so excited the UFC has finally come here.  We have a chance to bring attention from the world stage to Korea and we will use this chance to set the future of Korean MMA and MMA worldwide.”

The sport is bigger than it’s ever been in Korea, with several fighters making noise in the UFC, but few have seen MMA evolve there like the 32-year-old bang, who has been competing professionally since 2004. He recalls those early days, when the sport hadn’t even exploded in the United States, let alone in his home country.

“In the old days I was absolutely enthralled with MMA,” he said. “It was love at first sight.  But the level of Korean MMA was like the Wild West.  There was little regulation and the weight classes were constantly changing.”

He laughs, knowing that to those new to MMA, the idea of little to no regulation is a foreign concept, almost making it a completely different sport. Or as Bang points out, not a sport at all.

“When MMA first came to Korea, people didn't think of it as a sport,” he said. “The perception was that it was like a street fight, with little discipline or training and people just looking to brawl.  But with PRIDE and K-1, there were a lot of fighters who had showmanship and skill.  Then the UFC came and changed the perception from brawling to a legitimate sport, and people's thoughts changed with it.  The UFC changed everyone's mind with their high level of regulation and seeking out the best fighters.  People now view it as a legitimate sport with a high level of merit.”

Bang has earned his place in the big show, even though he’s had his ups and downs in posting a 1-2 record in the Octagon. But dealing with adversity has never been an issue for the Seoul native, who hit a crossroads in his career when he took a 1-3 stretch into his two years of mandatory military service in 2010. When he finished his term, he wasn’t sure if there was a future in the sport for him.

“I had mandatory military service for two years and I was working for a year after that trying to make ends meet,” he said. “I didn't know if I'd ever be back.  I was already considered old for the MMA world and I was thinking about whether or not to make a comeback.  But I made a decision to do my best and follow my passion one last time.  I had only had one fight after making my comeback, but the stars were aligned and the UFC came calling.  I am so happy and thankful for the chance to fight on the world stage, and I plan on fighting in the UFC for a long time.”

Bang’s UFC debut was a decision loss to Mairbek Taisumov in January of 2014, but he followed that up with a third-round knockout of Kajan Johnson five months later that earned him Fight and Performance of the Night bonuses. A submission loss to Jon Tuck in May kept him from building momentum off the Johnson win, but as he approaches his bout with Kuntz, it’s with confidence, as he plans on going old school on his opponent.

“Honestly, when I was young I loved to fight,” Bang explains. “It was a pure feeling, and I loved to train and fight.  After getting back from the army, I started to feel my age.  In Korean society there is a lot of pressure to live like a ‘normal’ person.  Work 9 to 5, get married, get a car, get a house, make money.  My passion was still there, but I admit I lost my focus trying to fit in society.  But I rededicated myself to following my passion.  I'm back to training and fighting with a pure heart.”

He’s bringing that heart to the Olympic Gymnastics Arena, and after that, the lightweight division will be put on notice.

“I wish to show everyone my true skill and passion,” Bang said. “I feel I have disappointed the Korean fans with my losses.  In 2016, I plan to be a fighter worthy of the fans’ love and support.”