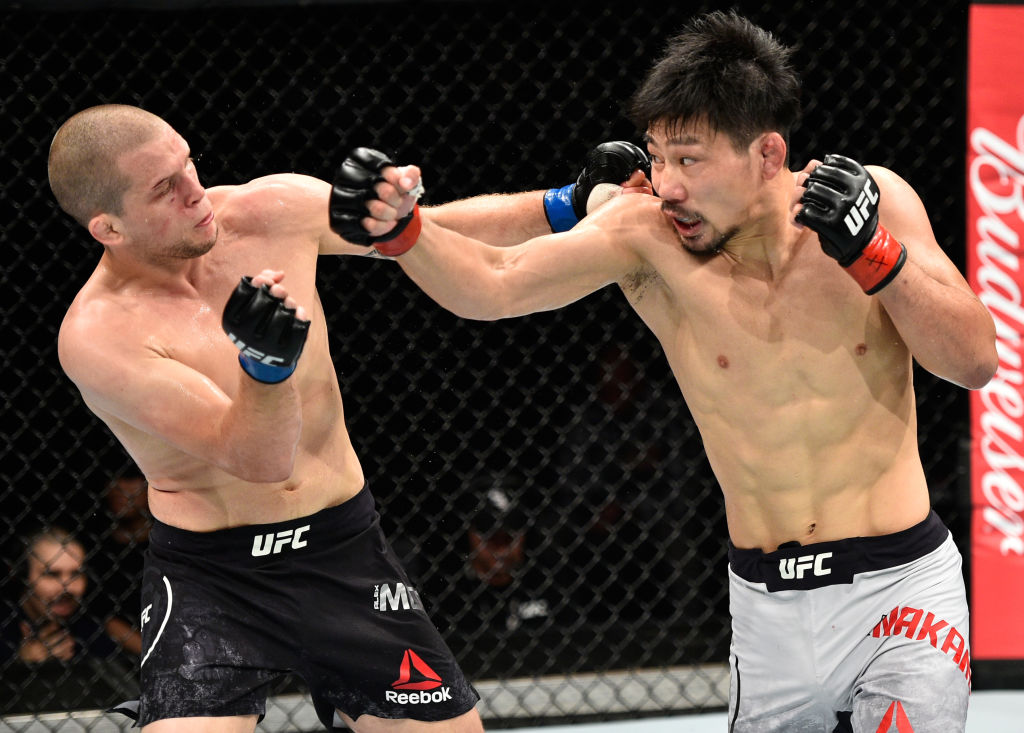 Fourteen years into his pro career, welterweight veteran Keita Nakamura continues to show new wrinkles in his MMA game, as he held off the charge of Texas prospect Alex Morono to win a hard-fought three-round split decision in a UFC Fight Night prelim bout at Saitama Super Arena.

Morono was in control for much of the opening round thanks to his steady pressure and thudding haymakers, but the biggest score of the round was a kick to the body with a little over two minutes left that clearly rocked Morono, who needed a few seconds to get his bearings back.

Nakamura, who had cut Morono over the eye in the previous round, got busier in the second frame, but the Texan steadily upped his work rate as well, allowing him to take over by the time the horn sounded.

Switching things up in the first minute of round three, Nakamura got a takedown, but Morono got to his feet quickly and went back on the attack, cutting his foe on the side of the head with a punch. With two minutes left, Nakamura got another takedown, only to see Morono jump right back up, and from there, it was dead even as both tried to get their final shots in. 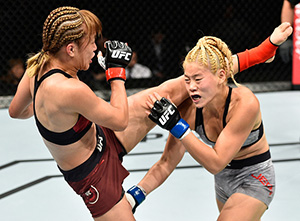 Octagon newcomer Syuri Kondo impressed in her UFC debut as she took a three-round split decision win over Chanmi Jeon in a strawweight contest.

A fast-paced first round was edged by Jeon, who kept the strikes coming throughout the first five minutes. Kondo wasn’t as busy, but her pressure and sporadic blows began paying off in the closing stages of the frame.

The back and forth action didn’t let up in the second and third rounds, with Kondo’s pressure unrelenting but Jeon’s return fire always coming back in rapid-fire fashion.

Shinsho Anzai puts on a show in front of his countrymen in a big win over Luke Jumeau! #UFCJapan https://t.co/KqcL3Szr9O
— FOX Sports: UFC (@UFCONFOX) September 23, 2017

Back in the Octagon for the first time since 2015, welterweight Shinsho Anzai scored an emotional three-round unanimous decision victory over Luke Jumeau.

Anzai’s aggressive attack worked well for him in the opening stanza, as he tagged Jumeau and marked his face up. But as the round progressed, the New Zealander’s counters brought him back into the fight, closing the scoring gap.

Anzai opened the second with a brief takedown and more hard shots on the feet, and his second takedown in the third minute kept Jumeau grounded for a more substantial amount of time. Jumeau did finish strong once the two stood, though, as he landed two hard uppercuts before the horn.

The third was hard to call, with Jumeau tossing off all takedown attempts by Anzai, but the Tokyo product still able to score with some flush blows until he tired down the stretch and allowed “The Jedi” back in the round.

HUGE shot by @MMA_Daichi lands and drops Kim as the round ends!!

The first five minutes saw Lim (13-7-1) and Abe (6-0) land potshots on each other at a rapid rate, with Abe’s blows having more steam on them, as evidenced by the increasing damage on Lim’s face.

After an extended break in the second minute of round two due to an accidental eye poke from Lim, the two resumed their kickboxing match, and it was Lim who landed a crushing right hand that jarred Abe and brought immediate swelling to his cheek. Another right hand followed in the final minute, wrapping up the round for the Seoul product.

In the third, Lim stayed a step ahead of the newcomer, but in the closing seconds, Abe landed a nose-breaking punch that dropped the veteran and nearly finished the fight. Lim survived the punishing battle, but the late surge wrapped up the decision for Abe by three identical scores of 29-28.