BJJ Star Meets Polyana Viana In Her Third UFC Contest May 21 In Las Vegas
By Steve Latrell, on Twitter: @TheUFSteve • May. 19, 2022

If you have toddlers of your own or have spent any amount of time around them, you are very likely already versed—for better or for worse—in the earworm known as “Baby Shark.” As persistent at sticking in your head as a Great White in pursuing its prey, it somehow became the perfect metaphor for Tabatha Ricci among her teammates.

“My nickname came from one of the professors at Paragon,” she explains, proudly holding a stuffed shark on her lap. “All the time when I show up to the gym, he says, ‘the baby shark is here.’ I’m the only girl, the smallest one. Always training with the big guys. I’m super grateful to be at Paragon; they’re special people. They opened their hearts and they opened their doors for me. Since the first day, I feel like family.”

The California gym where Ricci both teaches and trains is her adopted home outside of her native Birigui-SP, Brazil, and the background for her continued evolution in the world of martial arts, an evolution that has led her to her third UFC bout this Saturday versus Polyana Viana on the main card of UFC Fight Night: Holm vs Vieira. 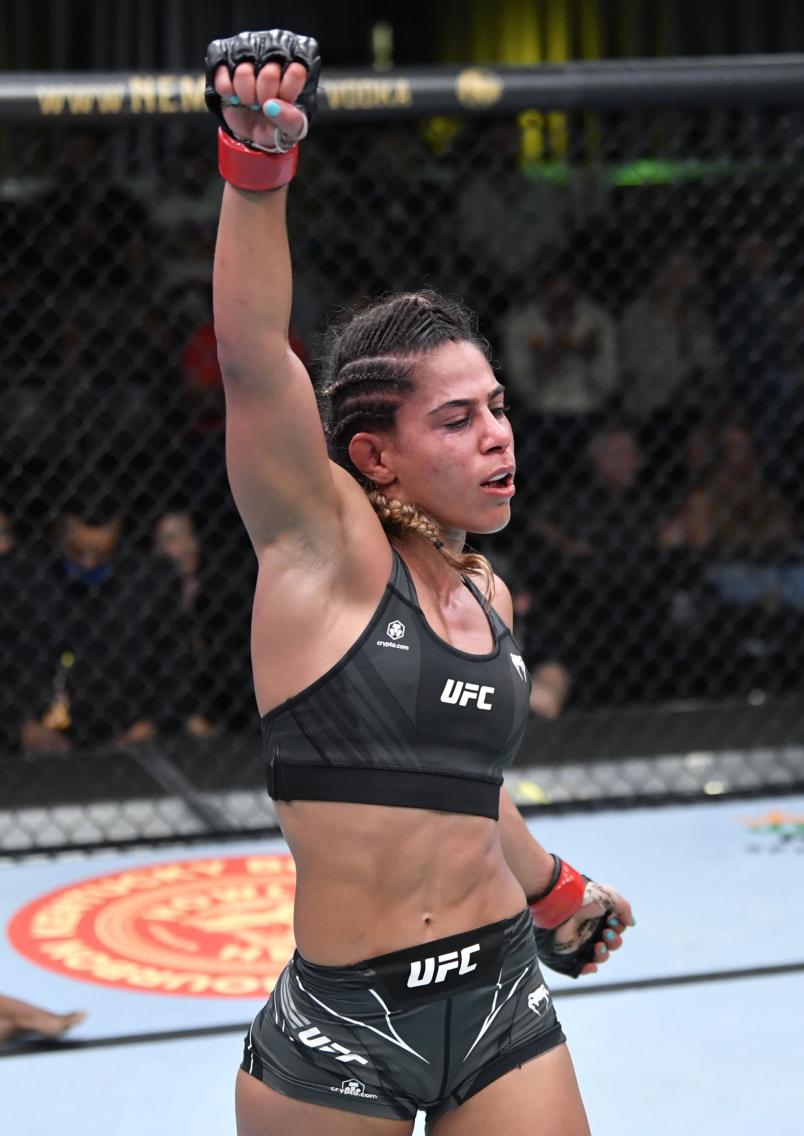 Tabatha Ricci of Brazil reacts after the conclusion of her strawweight fight against Maria Oliveira of Brazil during the UFC Fight Night event at UFC APEX on October 23, 2021 in Las Vegas, Nevada. (Photo by Jeff Bottari/Zuffa LLC)

For those of us that spent years--or are still spending them—in pursuit of what we should do with our lives, stories like Ricci’s path can be either inspiring or annoying…or both.

“My dad put me in judo when I was six years old. He’s a master in judo. I went to my first judo practice, I fell in love, and I knew what I wanted to do.”

And just like that, the path was revealed. Her father, Carlos "Trovao" Salto, is a judo black belt and borderline legend in those circles, so it’s not a surprise that the apple didn’t fall so far from the tree.

“He, for sure, had a lot of influence on my game and my career. He raised me with a budo/bushido background from Japan, like a samurai. I always remember his voice in my head, talking to me. I’m super-grateful for that.” 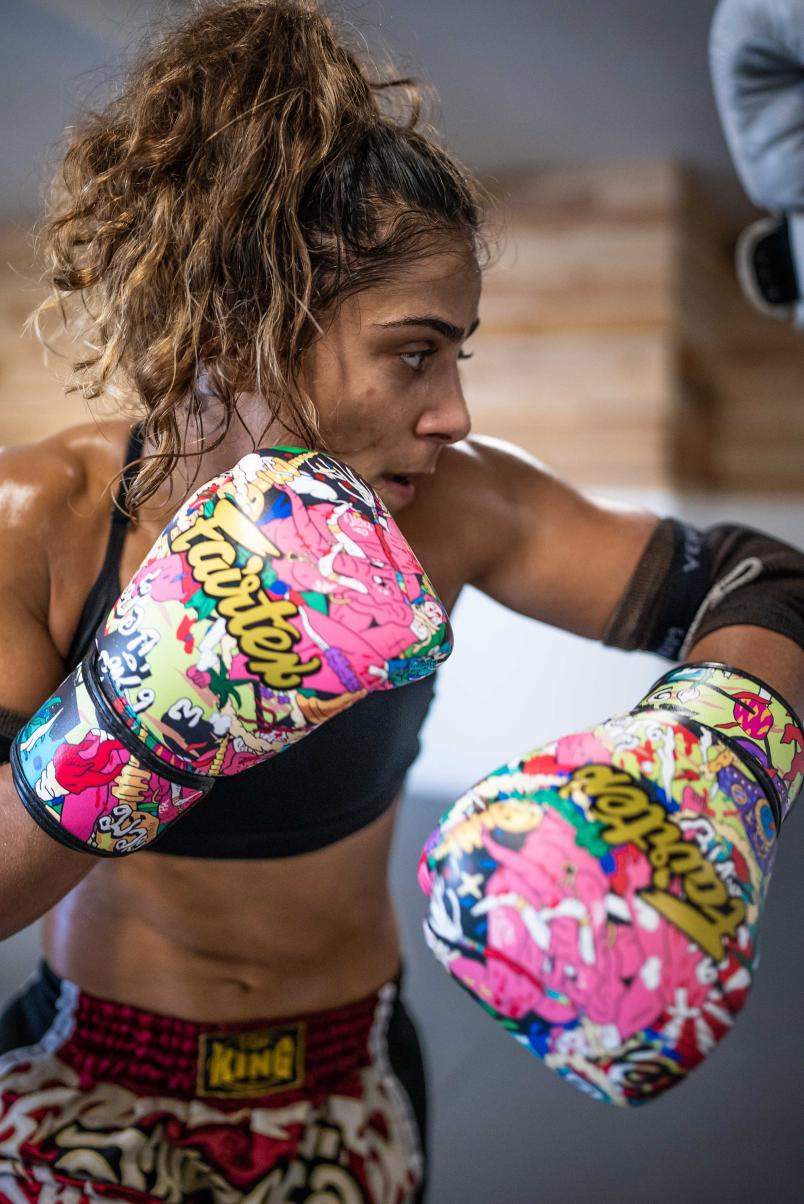 In training, May 2022 (Photo by Juan Cardenas/Zuffa LLC)

Judo would give way to Muay Thai, where Ricci had big successes, including winning the Brazilian Nationals. But her favorite discipline awaited her when she relocated to the United States.

“Jiu-jitsu is my favorite. Jiu-jitsu opened up a lot for me in the US. I don’t have nobody here from my family, so jiu-jitsu gave me family, gave me friends forever. I’m super-grateful to have jiu-jitsu in my life.”

Armed with the best of all three disciplines, Ricci gravitated to MMA, where, to date, the strawweight has amassed a 6-1 professional record.

Her lone loss came at perhaps the most unfortunate time: her UFC debut. She was a short-notice replacement in a weight class that wasn’t home and ran into the still-unsolved puzzle called Manon Fiorot.

“I would do some crazy jiu-jitsu to her,” she muses when asked in hindsight what she would have done differently. “Something she’s not expecting. But we’re always learning with the loss.” 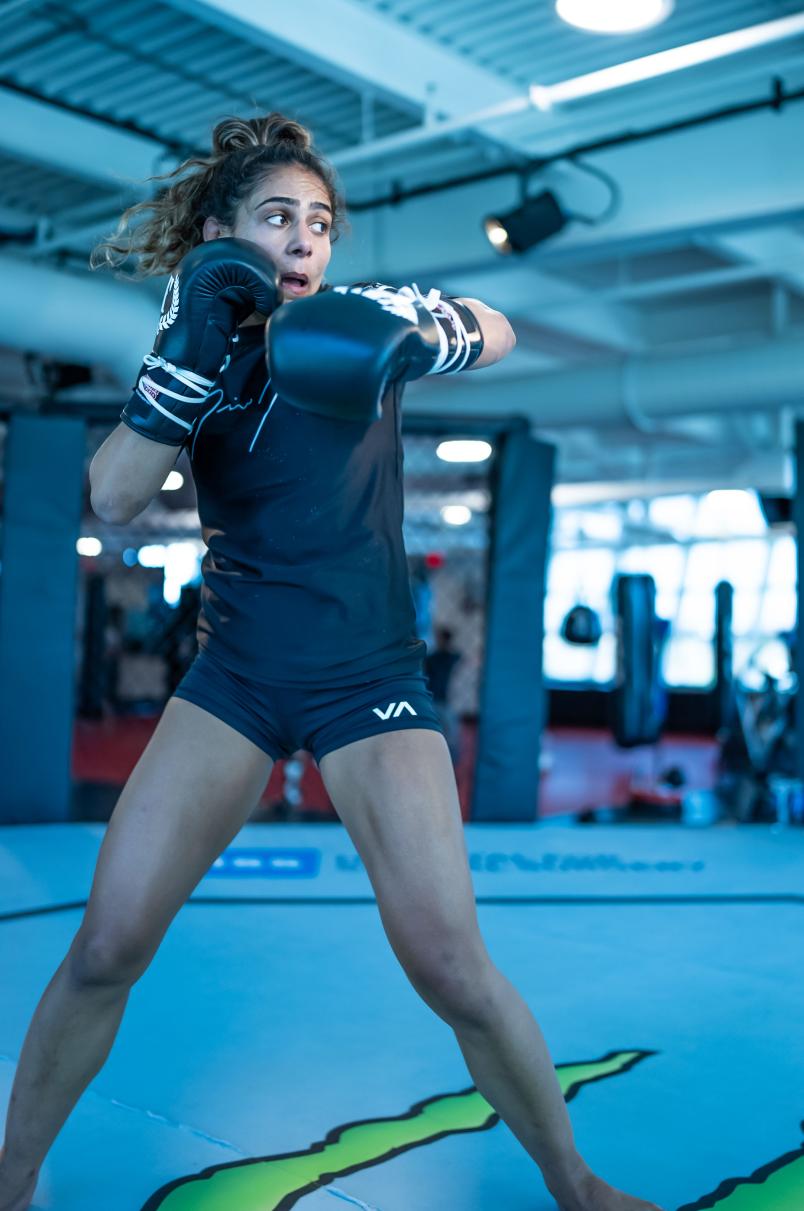 She says this completely at peace, unflustered with the notion of a losing. Of course, she wishes she had won, but she sees little value in looking backward.

“As an MMA fighter, we have to know how to win and lose. Move forward. Never give up on your dreams.”

Not unlike a shark.

She’d get back to her winning ways in her sophomore outing against Maria Oliveira last October. It was only the second time one of her fights got to the scorecards, but she felt at ease throughout the 15 minutes as the bout seemed to materialize just as she and her team had envisioned.

“I remember that everything we trained in the locker room before the fight, everything happened exactly the same. I was pretty happy about that. I can say the first win for me was a dream come true. It was everything I was wishing for. I feel relieved and super-ready for my next fight.”