LAS VEGAS, May 24 – Daniel Cormier said before his UFC 173 co-main event against Dan Henderson that he wanted to outwrestle his foe in this clash of former Olympic wrestlers. And he did just that at the MGM Grand Garden Arena Saturday night. But he also outfought “Hendo,” capping off a spectacular effort with a third round submission win that sent a statement to light heavyweight champion Jon Jones and the rest of the division.

Clearly the crowd favorite, Henderson stalked Cormier with his right hand cocked and ready to fire, but as soon as he did, Cormier slammed him to the mat. Working from side control, Cormier had no intention of letting his opponent up, giving him a mini-slam to remind him. Henderson did his best to hold on and force a restart, but Cormier kept working, unwilling to yield his position. With less than a minute left, the fight returned to the feet, Cormier missing a big right of his own just before the bell.

After coming up empty on two right hands to start the second, Henderson was taken down again, with Cormier staying busy with his strikes and submission attempts as he sought to improve position. Henderson kept battling, but the bigger man was clearly giving him a problem that he hasn’t dealt with in a long time, if ever – being outwrestled.

Cormier landed two kicks in round three before lifting Henderson up and unleashing a slam that will live on in highlight reels for eternity. Henderson, to his credit, recovered quickly, but he wasn’t able to get off the mat, as Cormier continued to pour it on. With less than two minutes left, Cormier put the finishing touches on the bout, sinking in a rear naked choke that put Henderson out at 3:53 of the final round.

Welterweight contender Robbie Lawler lived up to his nickname “Ruthless” in his bout with Jake Ellenberger, stopping his foe in the third round of their highly-anticipated bout.

“I want everyone to know I’m coming for that title,” said Lawler, who lost a close decision to Johny Hendricks in their March clash for the vacant 170-pound crown.

Lawler’s weapons of choice as the fight opened were his kicks, and he was liberal in dishing them out and landing them. Subsequently, they opened up his hands, and he appeared to be a step faster in getting his punches off, not the scenario Ellenberger wanted to be looking at. The 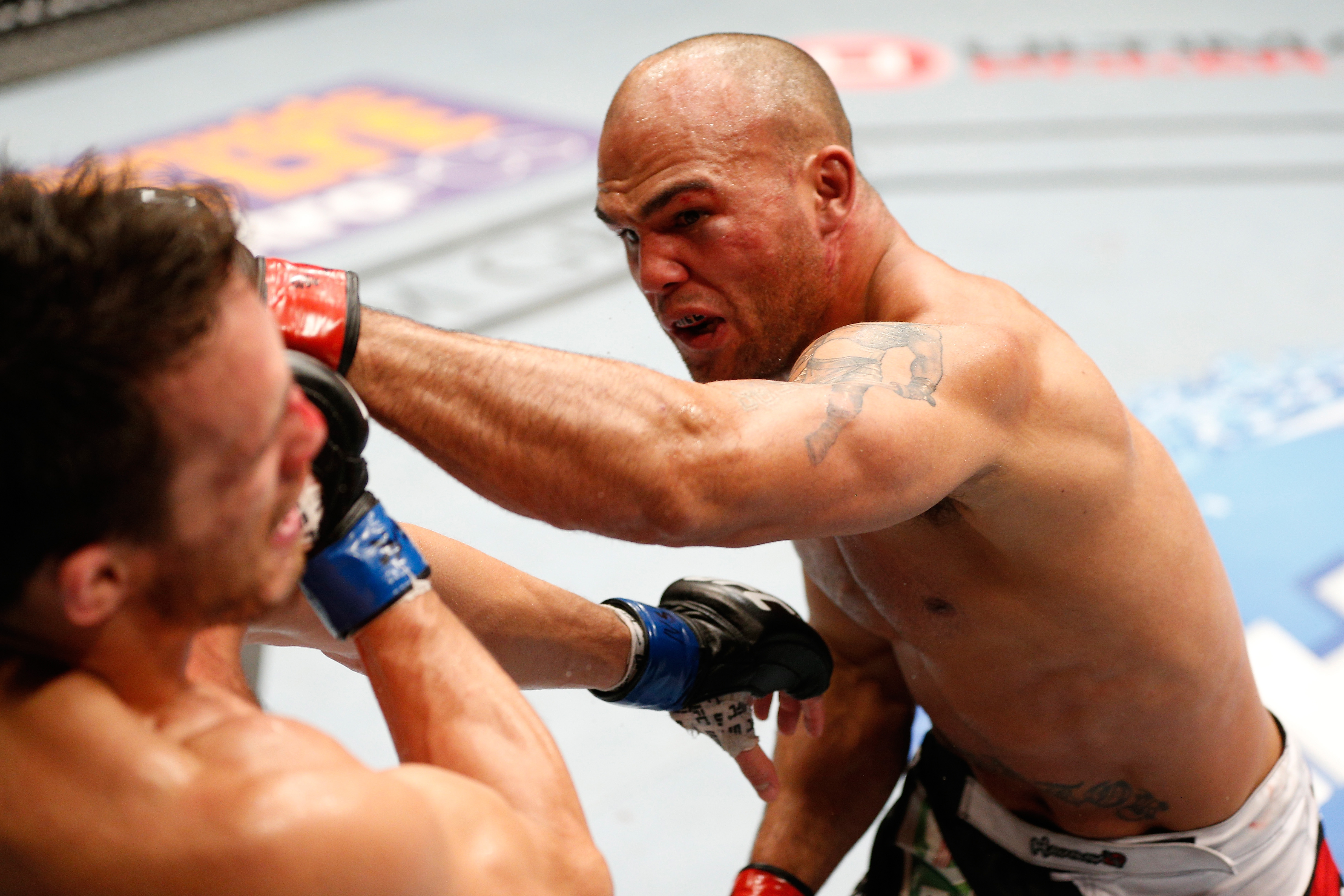 Nebraska native did start timing Lawler better as the round progressed, but not enough to deter the attack of “Ruthless.”

Starting fast, Lawler (23-10, 1 NC)  stayed in control in round two, jarring Ellenberger in a couple occasions and even fighting off his opponent’s attempts to take over on the mat. It was there that Lawler fired off some of his most telling shots, but after the two rose, Ellenberger was able to get his takedown. That was the good news. The bad was that Lawler got out of trouble quickly, ending the round on his feet.

Ellenberger (29-8) finally let loose with some of his trademark haymakers in the third, and he landed several as well. The surge was short-lived though, as Ellenberger went back to moving around the Octagon, giving Lawler time to set the pace. A straight right visibly hurt Ellenberger with a little over two minutes left, and after eating a flush knee and several hard punches, he hit the deck, with referee Herb Dean stopping the bout at the 3:06 mark.

Japan’s Takaya Mizugaki continued his march toward a world title shot, winning an exciting three round unanimous decision over Francisco Rivera to extend his winning streak to five.

After hearing some of the bombs Rivera was landing on Mizugaki in the early stages of the fight, it looked like it was going to be an early win for “Cisco,” but Mizugaki took the shots and after landing a hard right of his own that put Rivera on the mat, the roles were reversed. Now it was Rivera’s turn to recover, and he did just that, getting off the mat and back in the fight. After a brief spell locked up against the cage, Rivera ripped off more hard punches and Mizugaki answered in kind as the crowd roared in appreciation.

The slugfest didn’t let up early in round two, with Rivera holding an early edge as he cut Mizugaki above the left eye. Mizugaki was able to then score a takedown, but as Rivera scrambled up he sunk in a guillotine choke and pulled guard. Eventually, Mizugaki pulled free and began working his ground game, searching for a rear naked choke that never came.

Mizugaki’s right hand hit paydirt again in the third, putting Rivera on his back for the second time in the fight. Mizugaki was content to control matters on the mat from much of the round, but when referee Yves Lavigne restarted the action with less than a minute left, it gave Rivera new life. And though he wasn’t able to pull out the comeback victory in the final seconds, he and Mizugaki gave the crowd something to cheer about as they went toe-to-toe until the bell.

James Krause put together the biggest win of his MMA career in the main card opener, and while it ended abruptly via TKO due to an injury suffered by Jamie Varner, the Missouri lightweight will take it.

“It was the very first kick I threw,” said Krause, whose striking was sharp from the start, with Varner unable to get untracked. Even when the former WEC champion shot in for a takedown, it was greeted by a guillotine attempt and a reversal from the veteran Krause. Varner made his way free and began swinging for the fences, but he was having trouble staying upright after landing awkwardly on his left ankle after taking a kick there. The gutsy Arizonan stood in there courageously, but it was clear that he was working on a bad wheel, and as the round ended, so did the fight.