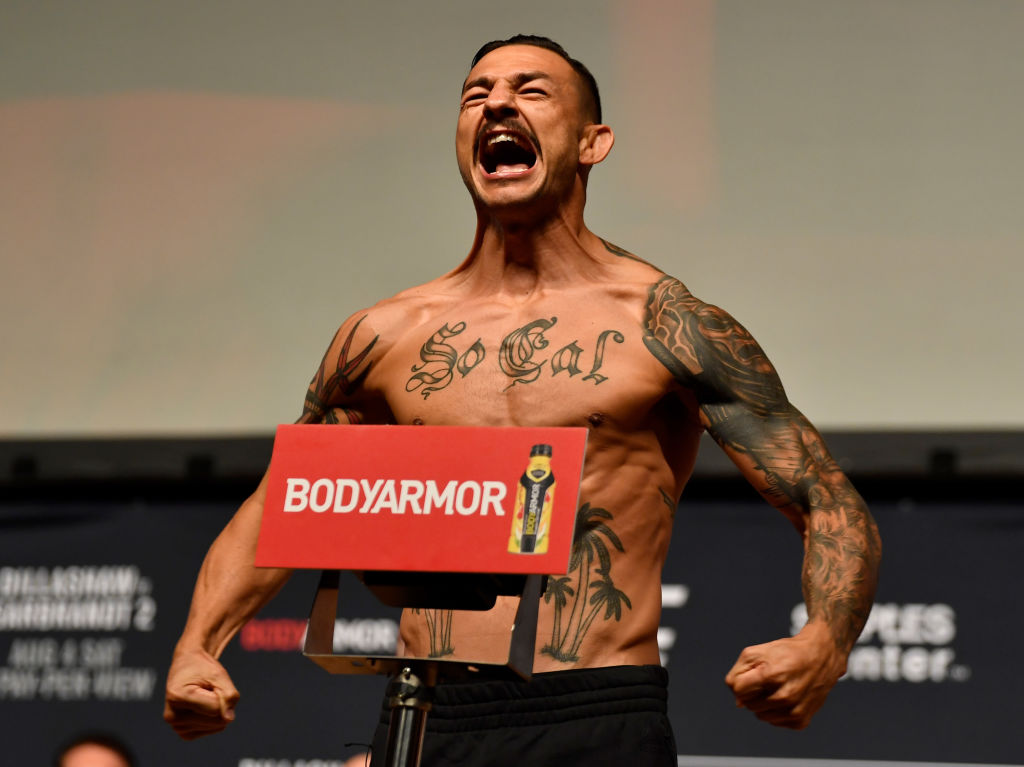 Cub Swanson is a happy man. Yes, he’s still in the top five in the featherweight division, he’s on Saturday’s UFC 227 main card in a fight against Renato Moicano, and he bought $26,000 in tickets so friends and family get to watch him perform in a rare Southern California home game.

But that’s not why he’s happy. Or should I say the main reason for his happiness. These days, the perennial 145-pound contender is most at peace when talking about his new – and growing – family.

Earlier this year, Swanson married his girlfriend, Kenda Perez, and as their daughter Royal continues to grow, the couple will be expecting twin boys soon. It’s a good time for the Palm Springs native, and one he’s always looked forward to.

“It was always part of the plan,” he said of settling down. “I just thought that it was down the road and I would work towards it. My whole career, once I got established in the company and really started doing it, I said, ‘What’s the goal?’And the goal was to eventually do well enough to be able to support a family and all that stuff. So that was always the end goal and then all of a sudden, I was getting up there.”

The 34-year-old laughs, but he admits that the more he waited for the right time, the more time was slipping by.

“Talking to some other older people that are very well established, it made me realize that no matter what, you’re always gonna feel like the time’s not right, so you just gotta start going for it and taking it day by day. And that’s kind of what we’ve done, me and Kenda. We went from one kid to three kids in a year, pretty much, so it’s kind of crazy.”

It’s a good crazy, but as nice as it is that Swanson has reached this place in his life after traveling a long, winding and often rocky road to get there, it’s easy to wonder where the fighting fire will come from now. On Saturday night, he will have Moicano chasing after him and trying to rip his head off. That’s never been an issue for “Killer Cub,” but is that killer still in there? Will he still find his fire when the Octagon door shuts?

“That’s the big question, and that’s what this game is all about,” he said. “I’ve been through so many chapters from the beginning of my career until now, and to be able to have longevity in the sport you have to learn how to adapt and how to keep that fire and have new motivations and new goals. And I’ve been able to do that.”

He believes he’s done it now, too, basing his camp close to home at the Treigning Lab, where his days are spent training before spending time with the family. It’s the balance he feels he’s always needed but only now has discovered.

“It’s different, but I’m thriving in it and it’s making camps more enjoyable and I feel like I’m putting more effort into it,” Swanson said. “I’m super optimistic about it, I’m happy with the progress that I’ve made and I know that this is the future for me, so I need to attack it and not ever let my family be an excuse. No, this is on me. I’ve got to go in there and make things happen and my family will benefit from the rewards of me being focused.”

So what is the focus these days? Swanson enters the Moicano bout having won four of his last six, but his last two fights were losses to Brian Ortega and Frankie Edgar. A win over Moicano keeps him in the top five, but he still wouldn’t be in the title race just yet. It’s a no man’s land for the veteran, but he’s willing to do what it takes to fight his way out of it.

“I’m definitely in that mode where I always want the big fights,” he said. “Unfortunately, it’s never worked out for me to have a title fight and that part has really bummed me out. I’ve had my ups and downs where I’ve been close so many times where I don’t care anymore. I know I’m an exciting fighter, I know I love what I do and I’m not gonna let the emotions of the ups and downs and the letdowns of things I can’t control get to me. What I can control is getting the biggest fights that I can get, training my butt off and putting on great fights for the fans.”

"My job is to go in there and kick ass." @CubSwanson talks about fighting at #UFC227 with so many SoCal friends and family in attendance.https://t.co/3rAHXh3Gqq pic.twitter.com/f9qoLvSyme
— UFC News (@UFCNews) August 2, 2018

It’s an unfortunate place for Swanson to be in, especially as one of the true gentlemen of the sport and a pro’s pro. But as such, he will take the fights put in front of him, fight his heart out, and then wait for the next one. And despite everything he’s seen in the sport, there is still a part of him that’s an optimist. That’s a living lesson for his kids; to never give up on a dream. It’s why when I ask what his reaction would be if his children wanted to follow him into professional fighting, he can’t help but give an honest answer.

“Obviously it’s not something I want them to do, but if it’s their passion, then I would support them the best I can,” he said. “I would never tell anybody not to chase their dreams or what they feel like they needed to do. That’s part of life, and whether you make it or not, pursuing something you want to pursue, I admire that.”

That admiration shines right back on Swanson, a helluva fighter and a better man. And he’s still got that fire.

“I really would like to fight for a title before I’m done fighting,” he said. “That’s still a goal of mine, but it’s not my main goal. My main goal is winning every fight that’s put in front of me and being able to come home and have a good time with my family.”