Swanson's genuine approach to the fight game paying off

One of the overlooked aspects of combat sports is the reality that to get ready for a fight, someone has to fight. No one knows that better than Cub Swanson, a pro since 2004 who has battled it out with the best of the best in the Octagon and in the gym. His record reads like a Who’s Who of the sport, and he’s also sparred with an equally impressive array of boxers and mixed martial artists.

But while he can be a fan of some of his training partners, that disappears when the gloves are on and the mouthpiece is in.

“The fan comes out when I’m watching other people,” he said. “I love it. But when I’m ready, whoever’s in front of me, I don’t care.”

He recalls a visit to the Xtreme Couture gym in Las Vegas years ago. It was MMA sparring day, and Swanson didn’t have a willing partner.

“I was ready to get it, but everybody got paired up and I’m looking around,” he recalls. “The only other person who was looking around too was Gabriel Gonzaga.”

“We touched gloves and just started going,” Swanson said. “He had his guard up high and was backpedaling, and I was just moving my head like Mike Tyson and throwing these big hooks and overhands, trying to engage. He took one step and front kicked me to the chest and I flew and hit the cage and hit the ground. I was like, ‘Okay, I get it.’ It was like he was trying to prove, ‘Hey, chill out little guy.’ In my mind, I was thinking I can take this guy.”

If you want one story to tell people who Cub Swanson is, that may be the one. This isn’t the typical sport. To be successful, you have to go against any conventional wisdom and tell yourself that the punches don’t hurt, that the wind isn’t escaping your lungs, and that when you’ve already fought your heart out for 10 minutes, you’ve got five more to go and you’re ready for them.

To do that once is worthy of a tip of the cap. To do it professionally for nearly 14 years puts someone in an entirely different place when it comes to respect. So when Swanson lost his most recent fight to Brian Ortega in December, marking the end of his UFC contract, the veteran contender thought he might be done with the promotion, but his fans weren’t about to hear that.

“Mentally, I was like, ‘All right, that’s it. My chapter in the UFC was done,’” Swanson said, not sure if an offer to return was in the cards. It was, with his new contract kicking off this Saturday with a co-main event against Frankie Edgar in Atlantic City.

But between the Ortega bout, which snapped a four-fight winning streak, and his re-signing with the UFC, Swanson found out how respected he really was.

“It felt really good, to be honest,” he said. “In the era that we’re in now, the people that are talking the most crap and blowing the most smoke are the ones getting the most attention. And I just refuse to do that. I agreed to myself a long time ago that I wasn’t gonna try to be somebody I’m not to make more money. So when I saw everybody getting my back, that part felt nice, that me being genuine and me being who I am and just going out there and fighting hard and sticking to who I was since I started as a fighter, just growing positively and not negatively, and people still backing me up, that made me happy. It’s really what MMA and its true fans are about, and I appreciated that.”

If you replace Swanson’s name with Edgar’s and read the above quote, it would surprise no one. The two featherweight veterans are among the most respected figures in the sport, class acts who let their fighting do the talking. And as hard as they compete on fight night, when the bout is over, they will shake hands and move on to the next one. 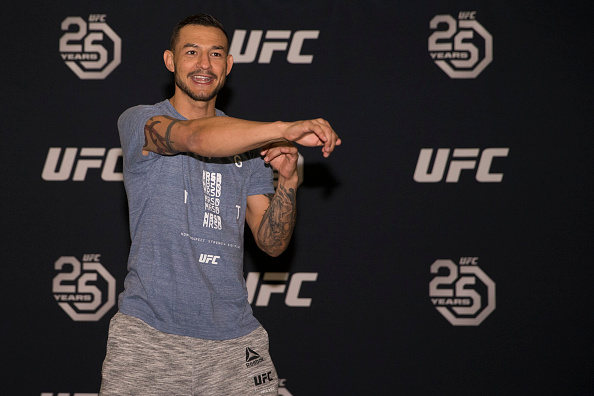 It’s what happened the first time they met in 2014 with Edgar leaving Austin with a fifth-round submission victory. They shook hands and moved on. Swanson didn’t think he would get a second shot at “The Answer,” but after Edgar lost to Ortega as well, he is, and despite the fight being made with five weeks’ notice for both, he jumped at it.

“The way everything played out and the way I lost my last fight, it didn’t sit well with me, but I had to take it as it was,” Swanson said. “Then seeing them (Edgar and Ortega) fight, I think it made some excitement for the fans to see me and Frankie fight again. It was an opportunity to get a do-over. I’ve been working those holes in my game that showed in that fight since that fight. So on one hand I only had five weeks to prepare for this fight, but on the other, I’ve actually had a few years to prepare.”

A fighter like Swanson never forgets. That can eat at someone, especially in a sport where second chances aren’t guaranteed. But he’s got one now, and he’s determined to get it right.

“When I was in there the first time, I was like, he’s not that strong, he’s not very fast, and nothing that he does blows me away, except for his smarts in there, his ability to make adjustments and listen to his coaches, and just how well they work together,” Swanson said. “I took lessons from that and I feel like it made me better. Now I understand what his game is and what he’s doing and why he does things. And it makes it easier for me to fight him and be more prepared for him. I know I can do better.”