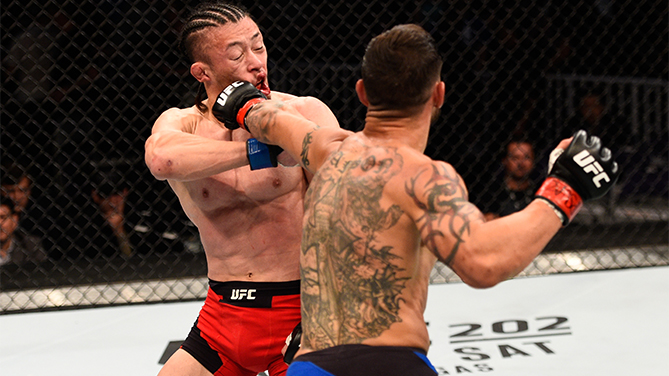 Cub Swanson continued to impress on his way back into the featherweight title picture on Saturday, winning a three-round unanimous decision over No. 14-ranked Tatsuya Kawajiri in UFC Fight Night prelim action at Vivint Smart Home Arena in Salt Lake City, Utah.

Kawajiri did solid work throughout the first round, particularly as the bout began and as the round ended, first with a varied striking attack and then with good groundwork after taking his foe down at the midway point. In between, Swanson’s striking was on target, as he rattled Kawajiri on a couple occasions, but whether it was enough to win the round was open to debate.

“The Crusher” got the bout back to the mat in the second minute of round two, but Swanson reversed position on the way down and nearly submitted Kawajiri with a rear naked choke before the two rose again. While standing, Swanson began tagging Kawajiri with punches, but after pushing him to the mat, he landed a knee to the head of the downed Ibaraki native. After a brief break, the fight continued, with Swanson landing several hard shots down the stretch.

After a strong start to the third, Swanson got grounded by Kawajiri in the second minute, but Swanson didn’t stay there long. Yet while he got upright, Kawajiri stayed locked on and scored another takedown. With two minutes left, Swanson escaped and began tagging his opponent once more, with a knee to the body being particularly effective. As the bout went to the ground once more, Kawajiri worked for a leg before Swanson maneuvered and finished with a flourish, locking up the hard-fought win. 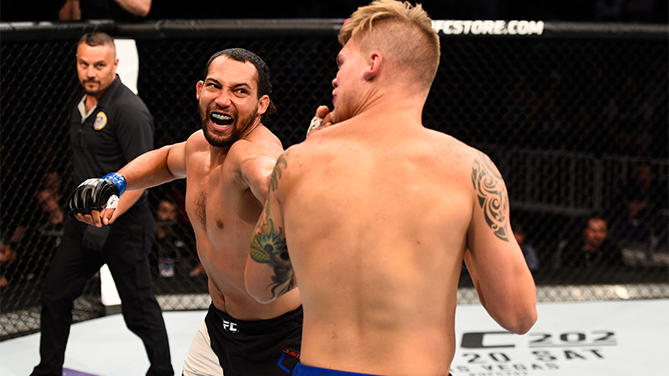 In a clash of debuting heavyweights, Justin Ledet put on a boxing clinic in defeating Chase Sherman over three rounds.

Ledet’s hand speed allowed him to take an early lead against the Mississippi native, and the smiling Texan was loving every minute of it. Sherman’s kicks to the leg were keeping him in the fight, but Ledet’s accurate strikes were doing most of the damage in a fast-paced first round.

Fighting in the second round for the first time, Sherman was clearly winded as Ledet continued to peck and poke at him, and the blood began to flow. Late in the frame, Ledet knocked Sherman’s mouthpiece out and rocked him, but the “Vanilla Gorilla” got his bearings back before the horn sounded.

The third round was more of the same, with Ledet just quicker and more accurate than his fatigued opponent.