Swanson: It's my job to kick ass 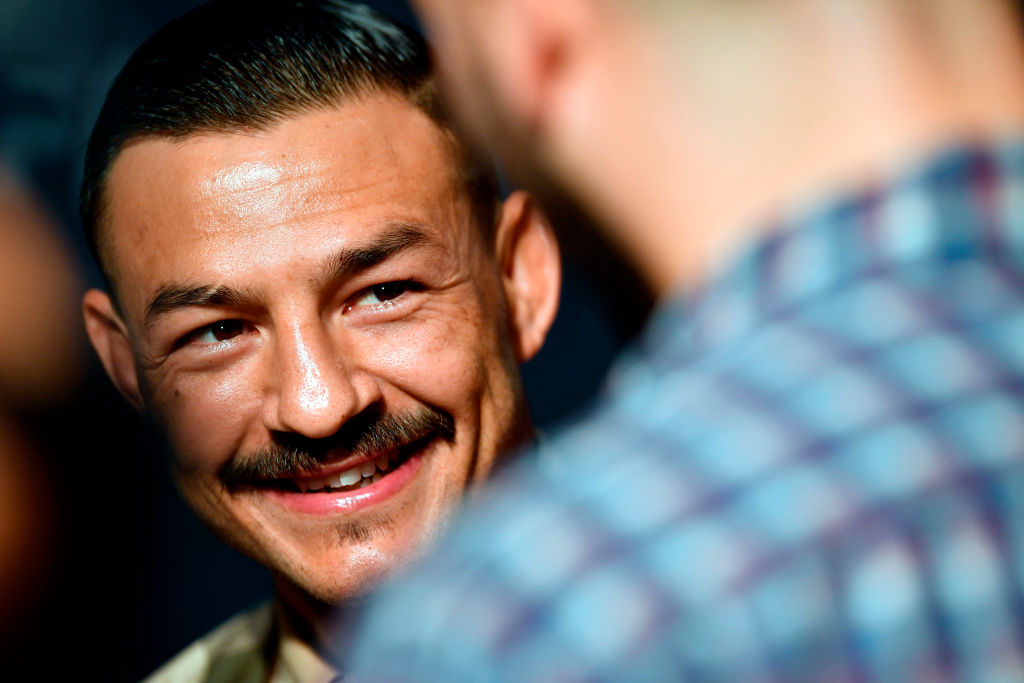 One of the hottest fights on the UFC 227 card promises to be the featherweight brawl between No. 5 Cub Swanson and No. 10 Renato Moicano. More than one hundred of Swanson's SoCal family and friends will be in attendance as he looks to thwart the Brazilian's rise up the ranks. We caught up with him to talk about the fight, that massive family support, fatherhood and more.

UFC: We were just talking to our UFC China counterpart and he told us the nickname they have for you in China. Can you guess what it is?

UFC: How did that come about?

CS: When I was in China for the UFC doing a Facebook Live, they explained that they call me that because of my palm tree tattoos. But I was telling them where’re I’m from, Palm Springs, there’s palm trees everywhere and we actually grow the most dates [not coconuts] in the United States. But I don’t want to make them mad, I think it’s a cool nickname.

UFC: You and your opponent, Renato Moicano, have fought a lot of the same opponents including wins over Jeremy Stephens and losses to Brian Ortega. What do you see when you look at him and what do you think the matchup is going to be like?

CS: If you take both of those fights, I think I did better in both of those fights. We both had the wins and we both had the losses against those opponents, but if you really break it down, I did better. I feel like I’m more experienced, and I feel comfortable fighting tall guys. Tall guys seem to keep their chin in the air, and I like to catch that.

UFC: You recently had a daughter and you have twins on the way. Has becoming a father changed the way you approach the game?

CS: It’s unique. People often ask me now about having kids and being a dad, and if it’s any different. They don’t give me extra motivation to train, I naturally have that. I’m very motivated. I hate losing. The real motivation comes from me wanting to plan my future, and how I’m going to secure my future. That comes with wins. That comes from being smart with the money that I make. That comes with being smart with my training; making sure I’m not taking those extra shots to my head during practice. It’s made me become a more efficient, better trained fighter. With me being a little older and wiser, I feel like I’m the best version of myself right now.

UFC: What’s it been like working and starting a gym with champ TJ Dillashaw?

CS: It’s been amazing working with TJ. We’re both competitive and we have a lot of fun in the gym, but when it comes time to be serious, we turn it on right away and go hard. We drill hard. We push hard in strength and conditioning. Whatever it is, jiu-jitsu, wrestling, striking, we go hard. We take care of each other. We help each other out. We look for each other with things like sponsorship. We’re both trying to grow outside the Octagon as well. We’re both new fathers. We’re at a very similar point in our lives and I think that our team training together is an amazing thing. I’ve learned a lot from him.

UFC: Being from Palm Springs, is fighting at Staples Center for UFC 227 practically a home game?

"My job is to go in there and kick ass." @CubSwanson talks about fighting at #UFC227 with so many SoCal friends and family in attendance.https://t.co/3rAHXh3Gqq pic.twitter.com/f9qoLvSyme
— UFC News (@UFCNews) August 2, 2018

UFC: How does that affect you, knowing all those loved ones are there when you’re coming out of the tunnel?

CS: Fighting in my hometown, and just getting all those people there…I can never think about that. When I go into the fight, I’m 100% focused. If you notice, my head is down. I’m always just super focused on one person: my opponent. That’s all I care about. After the fight, I’m making my rounds, I’m thanking everybody for coming out, trying to enjoy a little bit of my success with them. But before the fight it’s all business and I try to block that out because I think it’s just a distraction.

I know [my family and friends] are going to enjoy the fight whether they’re there live or watching it on TV, so I let them go enjoy themselves, drink beers, eat a lot and enjoy the experience because that’s what it’s all about. My job is to go in there and kick ass.