Swanson credits reinventing himself after unbeaten 2016

Cub Swanson doesn’t tend to say much, preferring to stay low key and let his efforts inside the Octagon speak on his behalf. But when the Palm Springs native sits back and opens up, paying attention is a must because the featherweight veteran is one of the most genuine competitors on the UFC roster.

Over a decade into his career, the 33-year-old’s path to being a fixture in the Top 5 in the 145-pound weight division has been anything but straight. There have been exhilarating highs and excruciating lows, all of which have combined to give “Killer Cub” the brutally honest perspective he carries into the cage this weekend when he faces Artem Lobov in the main event of Saturday’s UFC Fight Night event at Bridgestone Arena in Nashville.

“As fighters, we all have egos,” Swanson began. “Being able to look at yourself and say, ‘You were lying to yourself about this’ or ‘You let your coaches hype you up too much’ or ‘You let the fans get to you, telling you you’re great” is crucial.

“You have to look at every possible angle and start making checks – ‘Did I do this wrong? Can I do this better?’ And then ask every coach and every close person around you, ‘Have you seen a change?’ It’s a complicated thing and it can tear you down and that’s why I had to take time off – to be able to do that and come up with a new plan of how I could be better.”

After 364 days on the sidelines following his loss to Max Holloway, Swanson kicked off his comeback year in April 2016 with a unanimous decision win over Hacran Dias. Four months later, he did the same against Tatsuya Kawajiri before painting a violent masterpiece in a win over Dooho Choi at UFC 206 in Toronto.

The bout earned Fight of the Year honors throughout the industry, including at the Fighter’s Only World MMA Awards, and made it clear that Swanson was still a force to be reckoned with in the featherweight ranks.

He came out of the Holloway fight with a broken hand, a broken jaw and a broken spirit, unsure of his place in the division and uncertain that he would keep fighting. Two years later, he’s right back in title contention and coming off one of the most thrilling battles to ever grace the Octagon.
RELATED: Nashville Fantasy Preview | Free Fight - Swanson vs Siver | Lobov risking it all

“It was huge for me,” he said of his unbeaten 2016 campaign. “This is something that I have loved so much – it has been a part of my life for 13 years straight – and this sport has helped me become a man and become who I am today.

“Pursuing it as long as I want to do it is important to me, and trying to become the best fighter I can be has been important to me, so possibly getting it stopped shorter than I would have liked was a real possibility and I just had to once again reinvent myself to be able to continue doing this.

“At my age and my experience, it’s pretty hard to reinvent yourself again, so I’m proud of that accomplishment and I’m proud of the things I’ve been able to improve on and change,” he added. “I feel like I’ve never been a better fighter than I am now.”

That alone makes him a dangerous man to call out, and he showed Choi that you need to be careful what you wish for 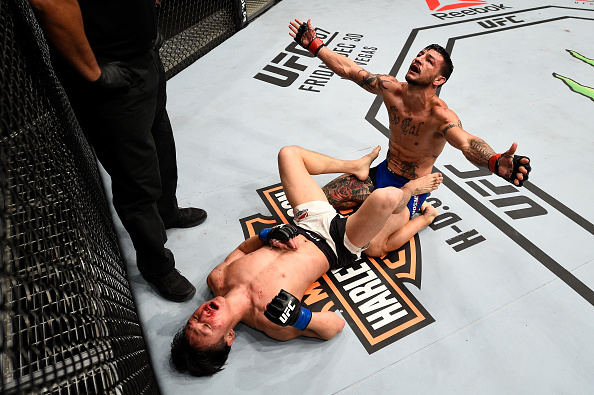 when they met at UFC 206 after “The Korean Superboy” repeatedly lobbied for the opportunity to face him.

And Choi was asking nicely. Lobov wasn’t nearly as polite during his pursuit of this weekend’s clash and he has stayed on the “personal insults” bent since the bout became official earlier this year.

“It’s funny – I’ve got to respect his guts to want to shoot up so high, to take a fight like this, but at the same time, I think the way he’s doing it is disrespectful,” Swanson said of Lobov’s pre-fight comments. “A lot of the guys that have been around for a while don’t appreciate it. It’s like, I don’t mind if you talk crap about me if you say something that is true. What am I gonna say if it’s true? But if you start saying blatant lies, that upsets me.

While a victory over the unranked Lobov may not register as one of the bigger triumphs of his career, it will carry Swanson to exactly where he wants to be as he readies to take the spring and summer off to welcome the arrival of his first child, a baby girl, with his girlfriend Kenda Perez.

“It’s gonna mean everything,” he said of pressing pause on a four-fight winning streak, entrenched in the Top 5.

“The real highlight of my career is just putting on the best performances and being happy with the success I have. If a title fight comes, awesome. That’s my main focus and I’ve been able to do that, so having four straight wins, getting some time off, having my daughter and then coming right back with a new contract and the biggest fight possible, I know all of that comes with performing on Saturday.”