Cub Swanson got too good. For a while, the Palm Springs native’s striking may have been the best in mixed martial arts, as evidenced by a string of knockouts over George Roop, Ross Pearson, Charles Oliveira and Dennis Siver.

Even when fighters like Dustin Poirier and Jeremy Stephens went the distance with him, Swanson’s angles, accuracy and power showed him to be a step ahead of his peers. It was a heady time for him, but by the tail end of 2014, the word was out on “Killer Cub,” and it was that his black belt-level jiu-jitsu game wasn’t an issue anymore. It was standup or bust, and if an opponent took that away, it was the quickest way to victory.

“My camp and teammates and manager and everyone were telling me, ‘You know no one’s going to stand with you,’” Swanson recalled. “And it made me take tools out of my tool belt to minimize risk. And so it made me be a little less creative.”

All of a sudden, a six-fight winning streak turned into a two-fight losing streak, as Swanson dropped bouts to Frankie Edgar and Max Holloway. He left the Holloway bout with a broken jaw and hand, two more additions to a laundry list of injuries he had suffered over the years. A year layoff followed, and when he returned to face Hacran Dias in April of this year, he was prepared to face not only his opponent, but his own doubts.

“I was confident in myself because you have to be, but it was definitely in the back of my head,” he said. “I was telling myself, ‘Hey, if you have another crap performance, then maybe you need to think about other options.’ With the injuries and the long career I’ve had, there’s no sense in just beating myself up if I’m not going to perform at the highest level. I expect to be better every time I go out, and if I’m starting to slide, then I’m not gonna do it anymore. It would be stupid.”
RELATED CONTENT: Matchup with Tatsuya Kawajiri | Fighter bio | Swanson tours Japan - Part 3 | Part 2 | Part 1

Fighters like Cub Swanson are different than most. There’s an intensity and passion to what he does, but he’s not going to wade blindly into battle either. So if there’s anyone who’s going to be honest with him, it’s the man in the mirror. And as good as he’s been, one of the best featherweights of this era had to wonder whether he had another run in him. He looks like he does, as he beat Dias to get back in the win column, and he’s got a big fight against fellow contender Tatsuya Kawajiri this Saturday in Salt Lake City.

Yet as the featherweight world goes round, does he ever get bitter about his lot in the fighting life, one marked by several bouts of bad luck that were not of his doing?

“There were times when I got bitter,” he said. “In those two losses I had, I was plenty bitter about people making more and people having an easier road, but that’s really not my personality, and I had to block that out and take a break and just focus on making the best out of my own situation. And that’s how I’ve lived my life, making the best of what I had. It took me a lot to refocus on that and concentrate on knowing that I’m only in control of what I can control. If I ever get the chance to fight for the title and get those big fights, it means more to me than those guys because I had to go through so much more to get there. So to me, it’s even more special and more gratifying and it means more altogether.” 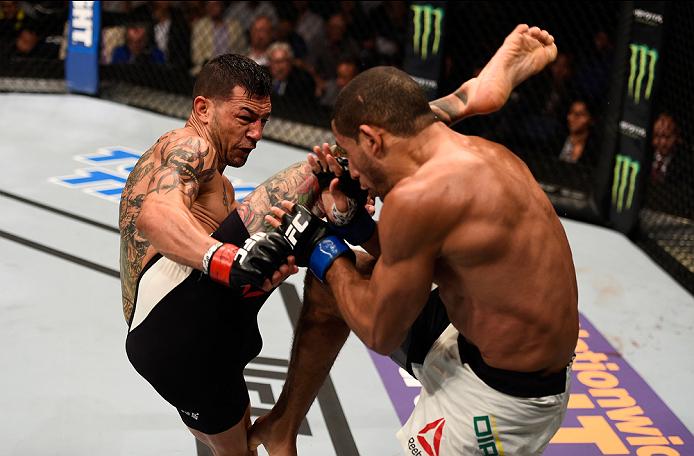 Swanson, 32, admits that he looks around and sees fighters that may not appreciate the opportunities they’ve been given. He won’t be one of them, but at the same time, he will not be someone who leaves the sport with a litany of woulda, coulda, shouldas.

“Some people get an easier route and some people get a harder route – that’s just the way it is,” he said. “I don’t want to retire some day and be like, ‘I could have been this or that, but everybody was holding me back.’ Those are excuses, and it’s easier to say that. I’d rather say I gave it my best in every opportunity I had and this is what I accomplished.”

That means that this Saturday, fans will see the best Cub Swanson available on August 6, 2016. He realizes that his blistering striking attack alone isn’t enough and that his jiu-jitsu alone won’t get the job done. He has to be a complete mixed martial artist, and when that happens, he will be THAT guy at 145 pounds again.

“I’ve been doing a lot of digging deep and finding new ways to be creative and explosive and trying to evolve so I can keep dominating,” he said. “I’ve been trying to get better everywhere so I can just be out there, be free, and be confident that I can fight everywhere. So that’s been the evolution of myself.”

As for everything else, Swanson is content to let the rest of the chips fall where they may. He’s been true to himself, and his fan base has been loyal to him. That’s good enough for him.

“Honestly, that’s my favorite part of it all as of now,” he said of his fans. “I don’t feel like I was pushed very hard and I don’t have anything special; I’m just another kid from California, it’s a dime a dozen. So all I ever had was my tenacity and my fighting spirit, and I think people really appreciated how many times I’ve gotten knocked down and got back up and just kept trying. So I feel like my fans are people that really see me as an inspiration, and I appreciate that, I really do, and it keeps me motivated.”