Svensson ready to prove he belongs in UFC 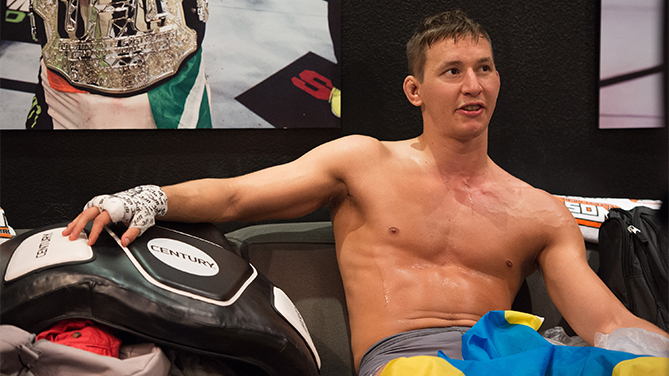 Martin Svensson is ready to show the world what he’s capable of inside the Octagon.

By all standards and measures, The Ultimate Fighter: Team McGregor vs. Team Faber season was as chaotic as any in recent memory, as both of the eventual finalists returned from previous losses due to other competitors falling out with injury. Of that collective, the rangy Swede was in the thick of the mix until he was forced out of the tournament after grabbing two impressive victories that had him rolling with steam toward a six-figure UFC contract.

And while that reality created many ups and downs for Svensson to deal with, he’s put that rollercoaster ride behind him and is geared up for his promotional debut this weekend at London’s O2 Arena. That said, Svensson will have to wait just a bit longer before he can truly close the book on his TUF experience, as his inaugural trip to the Octagon will come against former teammate David Teymur.

Nevertheless, the native of Malmo, Sweden will be looking to pick up where he left off in Las Vegas and he’s eager to regain the momentum a rough turn of circumstances took away from him. Svensson believes his chance to shine on the sport’s biggest stage has been a long time coming and it is not an opportunity he’s willing to waste.

“I have been working for this goal for over 10 years,” Svensson said. “I have been really close before and now it’s my chance. It’s a fantastic feeling. I never gave up and now that pays off. It’s a little sad that I will have to compete against a fellow teammate and Swede, but the feelings are dual because at the same time I’m very happy for the opportunity and I know it’s going to be a great fight.

“[The Ultimate Fighter] was very enriching and rewarding,” he added. “I learned a lot about myself and my limits. I’m very hard to break. Besides that, I realized my MMA skills are at a very high level. I know the experience can be distracting for some, but that wasn’t a problem for me because I’m good at focusing on myself, my goals and the obstacles ahead.”

Staying under the same roof during the most recent season of TUF certainly created some familiarity between Svensson and Teymur. Training sessions and long stretches of down time allowed the two men to get to know one another, but Svensson doesn’t see that situation directly affecting their upcoming showdown in London. He knows anything can happen once the action gets started inside the Octagon, and he is looking at the matchup with fresh eyes.

“A fight is a fight and you never know what’s going to happen,” Svensson said. “I have prepared for everything and I’m going to dominate. We got to learn about each other in the house but we haven’t been in communication since we left. He lives in the northern part of Sweden and I’m from the dirty south, so we never trained together before or after the show.

“Teymur is an extremely good striker but I feel my advantage is my overall experience in the MMA game. That is what will make me victorious. I will be coming forward to apply the pressure and it’s going to be a back and forth fight. It will be a mess and a real scrap.”

While Svensson is fired up to kick off his run in the UFC, there is an added element of excitement in the fact his debut will come on European soil. He spent his years before the big show grinding away in smaller promotions, hoping that one day the UFC would dedicate itself to a larger global push. The organization has been extremely committed to that effort over the past eight years and Svensson believes it is a move that will pay tremendous dividends for all involved.

“MMA is definitely growing in Europe,” Svensson said. “We have always been good at MMA here, so it’s about time the rest of the world realizes it. I think we European fighters are going to dominate al the weight classes in a couple of years. We are smarter, tougher and more skilled.

“I’m going to embrace it,” he added about fighting in the famed London venue. “I think the whole experience is going to be absolutely great and the crowd is going to give me power. I have had big fights before and I’m kind of used to the pressure. But nothing will compare to this. I will be focused and it’s going to be a great night.”