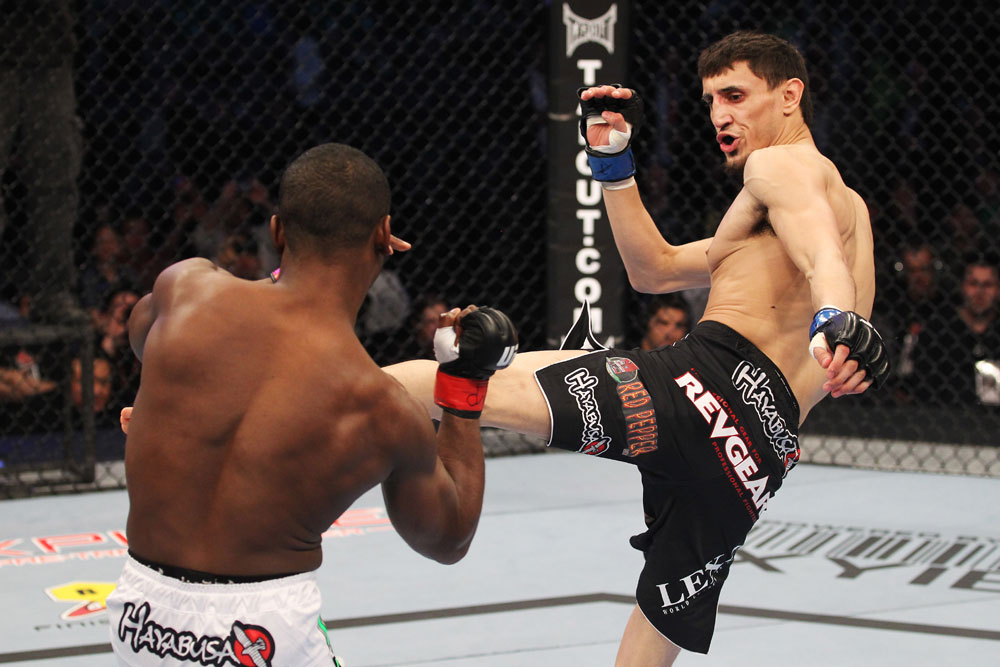 It’s a cliche, but each and every UFC fighter needs to prepared for just about anything to happen inside the Octagon. Specifically, for the opponents of Pablo Garza, they need to be ready for something “flying”. Both of Garza’s Octagon appearances ended abruptly with high risk, high reward maneuvers that netted him two wins and two bonuses. What was surprising to him wasn’t the knee landing or the triangle sinking in, but that his life had even led him into the cage.

“I never thought I would be fighting in the UFC,” he admits. “A lot of people in the UFC will tell you it's been their dream ever since they saw Royce Gracie fight Ken Shamrock when they were a little kid and this and that. For me, I remember seeing those videos when I was a kid too, but I never had that dream of becoming a UFC fighter then. I more fell into this. I fell into fighting because it was competitive. I played college basketball and got into MMA because it was competitive. It snowballed and I ended up in the UFC. It wasn't my dream to be in the UFC - it just happened. Now that I'm in it - I feel blessed to be in the UFC.”

It’s a dose of refreshing honesty that he no more predicted being a professional cagefighter than fight fans could have guessed the outstanding outcomes to Garza’s only two UFC bouts. Ironically enough, the guy who never anticipated competing in the Octagon was actually a part of UFC history by fighting in the company’s first featherweight matchup at The Ultimate Fighter 12 Finale on December 4th against Fredson Paixao.

Garza introduced this lighter weight class to the UFC faithful with a bang in the form of a flying knee that knocked Paixao out just 51 seconds into round one. “‘The knee’, I do train that,” states Garza of his highlight reel Knockout of the Night, which he emphatically says wasn’t a fluke strike, but something his 145-pound peers have to be wary of. “I'm tall and everyone is usually shorter, so with the height difference, I believe I can land that probably better than anyone in the weight class because I'm taller than everybody.”

He followed up the unlikely KO with the almost unheard of in the form of a flying triangle at UFC 129. Garza’s second outing in the Octagon was also historical, as this time it was a landmark event in Toronto, Canada at the Rogers Centre in front of the UFC’s largest audience of over 55,000. The record crowd saw Garza take on fellow countrymen Yves Jabouin, and the fight lasted longer than a minute, but ended in as exciting fashion as Garza jumped for a triangle from a standing clinch with Jabouin, nailing it for another win and a Submission of the Night award.

“To tell you the truth, when we were in the back locker room warming up, my coach was shooting in on me and grabbing a single leg takedown and when I was warming up I just jump triangled on him when he went for that single leg and I landed it,” tells Garza. “People looked at me and laughed and were like, ‘you better not try that in the fight or you'll end up on your back and getting hurt.’ In the fight, I was landing knees on him in the clinch. I noticed the second time we clinched he put his arms down to block my knees. I just felt like I could do it, so the third time we clinched when he put his arm down to block my knees and left the other one around my head, it gave me the opening to just go for it. It was just instinct. I just went for it and didn't think what would happen if I missed or if I landed it. I felt like I had an opportunity to do it, so I did it.”

At 28 years old and with an overall 12-1 career, “The Scarecrow” is slated, yet again, to fight on another significant night for the company: November 12th at UFC on Fox. The headlining bout is the very well publicized UFC heavyweight title match between Junior Dos Santos and champion Cain Velasquez. The first bout announced to be on the card outside of the main event was Garza vs. fellow burgeoning star Dustin “The Diamond” Poirier. Clearly, the UFC’s top brass wants some more magic out of these two featherweights, who truly do shine when the bright lights are on.

“Dustin's really tough,” asserts Garza. “He's beaten some really good people. He's a really strong striker and comes straight forward. He's a good all-around MMA fighter in general. It's going to be a good fight. It's going to be a great opportunity for me to show off what I can do and to do it against a really strong opponent in Dustin Poirier. He's ranked up there in our weight class as an up and comer. He's beaten a lot of good people; he destroyed Josh Grispi and Josh Grispi was supposed to fight Jose Aldo for the title when he did that. He also beat an awesome striker in Jason Young. I have a lot of respect for him and have been training hard and can't wait to fight.”

To prepare for the 10-1 Poirier, Garza is training in his hometown of Fargo, North Dakota at The Academy of Combat Arts run by his head coach Dylan Spicer. “The Scarecrow” is also making the drive across neighboring state lines to The Academy, formerly known as the Minnesota Martial Arts Academy, owned and operated by the world renowned Greg Nelson. The two gyms have similar names, but not by coincidence, as Spicer’s facility is an affiliate of Nelson’s as Spicer is a protégé of his. Although new to the UFC, Garza is busy training with Octagon regulars like Jacob Volkmann and Nik Lentz while being taught in a system which has helped produce former UFC champions like Sean Sherk and Brock Lesnar.

“When I first started training, I thought I was in good condition fighting in these local shows,” says Garza. “Once I got to train with them and seeing what actual training was for legit professional fighters in the UFC, it was a big eye opener. It showed the type of dedication that someone has to have. When Dylan came down here from the Minnesota Martial Arts Academy and came to Fargo, North Dakota and opened his gym, the type of practices he made us go through I would think, ‘This is too much. There is no way my opponent is training this hard.’ Then when I started going to The Academy, I was like holy s**t these guys are training just like that. It was another thing that Dylan brought to my attention and the other fighters’ attention at our gym was that this was the type of training we had to do to compete at this level; it was going to be really rigorous and strenuous. It was a big eye opener, definitely.”

All fighters must thank their coaches for helping mold them to be the fighters they currently are, so that they could be in the UFC today. For Garza, it is a step further than that because it was Spicer who convinced him not to quit MMA and to give it one more year. In that rollercoaster year, Garza went from more local shows to his Octagon debut against Paixao. Garza is thankful for Spicer’s insistence to see where this sport could lead in a year, as well as for his continuing presence as a coach and friend.

“With Dylan, our relationship started out as coach and student,” expresses Garza. “We've evolved into really good friends. We're more than just coach/student - we hang out all the time. He's the type of guy that just understands the whole MMA game. He understands what you need to do to be disciplined in all these areas. A person can train their Muay Thai and train their wrestling and train their jiu-jitsu, but if a person can't bring it all together in an MMA fight and if they can't transition from striking to a quick takedown into their submissions, then a fighter isn't going to last. Dylan, he really understands that part of the game of bringing it all together and bringing it to one. That's what makes him so good. I can honestly compare him to famous MMA coaches like Greg Nelson. He does it all by the book of what Greg Nelson does. He can break down a fight and break down a fighter. He's one of the coaches who knows how to bring it all together and he can teach what is hard to be simple.”

On November 12th in Anaheim, California, fiery featherweights will collide as “The Scarecrow” clashes with “The Diamond”. It should prove to be wildly exciting, as both fighters are young and hungry and have yet to fail to deliver those metaphorical fireworks in the Octagon. For Garza, he’s willing to roll the dice in the cage as he is sort of playing with house money by competing at the highest level of a sport he never envisioned himself in. Regardless of its lack of predetermination, Garza is certainly game and settling in nicely to being a professional UFC fighter.

If he can keep “flying” through the weight division, then Garza and fight fans can expect him to be a professional fighter for years to come.