Heavyweight contender Cheick Kongo returns to the Octagon this Saturday to face Shawn Jordan in UFC 149 action from Calgary... 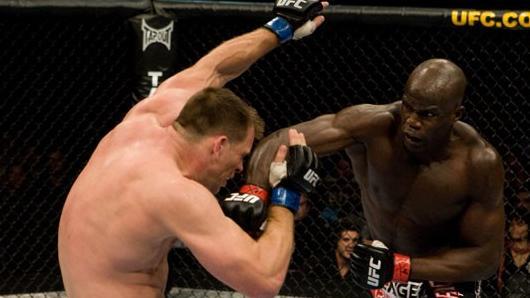 A senior member of the UFC’s heavyweight division, Cheick Kongo will enter the Octagon for the 17th time this Saturday night in Calgary when he faces off against up and comer Shawn Jordan in UFC 149 action. So what has kept the Frenchman around so long – try a willingness to fight anyone and the ability to hang with whoever dares to face him. And whether he’s won or lost, more often the not, fans will leave the arena talking about him, and that’s always worth something.

TKO1 Gilbert Aldana – UFC 61 – July 8, 2006
If the late Gilbert Aldana (who drowned in a tragic boating accident in 2007) could be compared to any modern UFC fighter, you could probably think of him as his era’s Joey Beltran. He was a hard-puncher, ultra aggressive, and just loved to bang. In other words, he was the perfect foil for France’s Cheick Kongo to make his UFC debut against, and the Parisian delivered on the pre-fight hype with a precise striking assault that included knees and uppercuts that sliced Aldana up and forced a stoppage late in the first round. It was the first of 16 UFC fights for Kongo.

W3 Mirko Cro Cop – UFC 75 – September 8, 2007
After his impressive UFC debut, Kongo hit some rocky ground, winning impressively over Christian Wellisch before dropping an upset decision to Carmelo Marrero and squeaking by Assuerio Silva. A UFC 75 bout against Mirko Cro Cop was either going to be a stellar return to form or a knockout loss at the hands (or feet) of one of the sport’s most feared striker. What it eventually turned into was something in the middle, as Kongo fought smartly and tactically against Cro Cop, surprising him at every turn en route to a three round unanimous decision win that handed the Croatian the first two fight losing streak of his career.

TKO2 Antoni Hardonk – UFC 97 – April 18, 2009
In a recurring theme throughout Kongo’s UFC tenure, he followed up a big win with an equally big loss, and after beating Cro Cop, he was upset by veteran Heath Herring via split decision in March of 2008. By August, he was back in the win column with a TKO of Dan Evensen, and Mostapha Al-Turk took an even more frightening beatdown from Kongo at UFC 92. Next up for the Paris native was fellow striker Antoni Hardonk, and though Hardonk was expected to give him a difficult challenge on the feet, Kongo responded by taking the fight to the mat and using his ground and pound attack to finish the fight at 2:29 of the second round.

L3 Cain Velasquez – UFC 99 – June 13, 2009
After the win over Hardonk gave him his first three fight winning streak in the Octagon, many believed that if he could hand unbeaten young gun Cain Velasquez his first loss in their UFC 99 showdown in Germany, a title shot would be next. And for a couple brief moments it looked like that would be the case, as Kongo rocked and dropped Velasquez hard to the mat. To the future heavyweight champion’s credit, he bounced right back and had the presence of mind to shoot for – and get – head-clearing takedowns, and it was these takedowns and Velasquez’ ground control that earned him the unanimous decision win.

Lsub1 Frank Mir – UFC 107 – December 12, 2009
Despite losing to Velasquez, Kongo’s strong showing earned him another high-profile fight immediately after, this one against former heavyweight champion Frank Mir. The lead-in to the bout was filled with plenty of trash talk and Kongo even turning his back on Mir at the weigh in, but it was the Las Vegan who got the final word, dropping Kongo in the first round and then finishing him off with a guillotine choke. The bout took just 72 seconds, and stands today as the most bitter of Kongo’s five UFC defeats.

KO1 Pat Barry – June 26, 2011
With the exception of the Mir and Mark Hunt fights, one of Kongo’s best attributes has always been his cast-iron chin, one tested by the likes of Velasquez, Hardonk, Cro Cop, Herring, Paul Buentello, and Travis Browne. But when he was cracked and hurt by Pat Barry in June of last year, even the staunchest Kongo supporters had to assume the end was near. Even referee Dan Miragliotta appeared to be on the verge of stopping their fight when Kongo rose to his feet and somehow found the presence of mind to fire off two right hands. The first one stunned Barry, the second sent him to the canvas, with the fight being stopped moments later. It was one of the sport’s great comebacks, and a warning to future opponents that if you hurt the ultra-tough Kongo, you better finish him before he comes back to finish you.