Recap some of Ben Rothwell's best moments ahead of his matchup with Ovince Saint Preux at UFC Jacksonville
By E. Spencer Kyte, on Twitter @SpencerKyte • May. 11, 2020

Wednesday evening, Ben Rothwell will step into the fray for the 50th time in his career, which started six days into 2001 with a victory over Rob Shinkle in Racine, Wisconsin.

After nearly nine full years competing on the regional circuit and as a member of the Quad City Silverbacks in the International Fight League (IFL), “Big Ben” got the call to the UFC and, over the last decade, the heavyweight veteran from Kenosha has been plying his trade inside the Octagon.

As he readies to take on Ovince Saint Preux in the co-main event of this rare Wednesday fight card, we take a look back at some of Ben Rothwell’s defining moments inside the Octagon.

Some might consider it strange to start a list of this nature with a loss, but the outcome of this October 2009 contest, which set the table for the first light heavyweight championship clash between Lyoto “The Dragon” Machida and Mauricio “Shogun” Rua, is as important as the booking itself.

Velasquez was 6-0 at the time and coming off a win over Cheick Kongo. It was the first time the heavyweight prospect went the distance and didn’t look like an unstoppable juggernaut, and as an encore, the UFC tabbed Rothwell to share the cage with the promising unbeaten fighter.

Rothwell was 30-6 and had won 14 of his previous 15 bouts, including earning victories in all nine of his IFL appearances. He was a seasoned professional with a quality resume and an even greater reputation and was viewed as a stern test for the emerging Velasquez.

Velasquez earned a second-round stoppage victory over Rothwell and claimed the heavyweight title from Brock Lesnar 364 days later at UFC 121, with a knockout win over Antonio Rodrigo Nogueira in between. More than the clash with “Big Nog,” it was this performance against Rothwell that re-affirmed that Velasquez was the real deal and kicked off his run to the title.

This was an important fight for Rothwell, as the veteran had dropped two of his first three fights since joining the UFC. Now, losing to future heavyweight champion Cain Velasquez and legendary veteran Mark Hunt are far from career-crippling setbacks, but splitting your first four fights looks and feels a whole lot better than having a 1-3 start.

Schaub was at an interesting point in his career, as well, having just suffered his first loss since facing Roy Nelson at The Ultimate Fighter 10 Finale. He had collected four straight wins, including a stoppage victory over Mirko Cro Cop, but got a little loose and paid for it dearly in his matchup with Antonio Rodrigo Nogueira eight months earlier at UFC 134.

Ostensibly, this would determine which man would keep moving forward in the division and who would be forced to take a step back and regroup. It only took 70 seconds to get an answer.

It’s rare that both fighters have their moments in a fight that barely lasted a minute, but the final 30 seconds of this clash saw each man land good shots. The finishing sequence actually kicked off with Schaub staggering Rothwell with a spinning back elbow, but when he pressed forward looking to pour it on and put the veteran away, “Big Ben” connected with a left hand that turned out Schaub’s lights in a flash.

In a little more than a minute, Rothwell made it clear that he wasn’t going anywhere.

Fighting in his home state of Wisconsin for the first time in more than seven years, this was another crucial fight for Rothwell after he once again fell below .500 in the UFC following his blistering finish of Schaub when he suffered a second-round submission loss to Gabriel Gonzaga.

For Vera, this was a return to heavyweight following his outstanding fight with “Shogun” Rua the previous summer and positioned as a potential kick-off to the next chapter in his career.

This was a close, but not particularly eventful fight through the first two rounds, with Vera getting the better of things in the opening frame and the second being a little tougher to call. There were no points where either man was in serious danger, and heading into the third, it seemed like that is how this one would continue to play to the finish — just an evenly matched give-and-take between two consummate professionals where neither did anything of great consequence and the judges were called upon to render the final verdict.

Early in the third, after Rothwell landed a good kick to the body that seemingly stung Vera, the two clinched along the fence before getting separated into space by referee Herb Dean. As they reset, Rothwell threw a high kick and landed a right hand to the body off a hard feint, and then he went full “Techno Viking.”

Bouncing on his feet, shifting his shoulders demonstratively as he tried to back Vera into the fence, Rothwell looked a little unorthodox, but it actually worked. Vera seemed frozen by the movements and unsure how to counter, allowing Rothwell to get inside, and once the fight was in close quarters, “Big Ben” unloaded, hitting Vera with a torrent of strikes that ultimately caused him to wilt to the canvas and Dean to stop the fight.

The victory over Vera brought Rothwell’s UFC record back to .500 and once again piqued fans’ interest in the veteran, but this fight, more than any other, is the one that finally got folks thinking about “Big Ben” being a potential contender in the heavyweight division.

Overeem had bounced back from consecutive losses with an intelligent, workmanlike win over Frank Mir seven months earlier and his name still carried a certain amount of cache, as it does to this very day. This was a terrific piece of matchmaking where no matter the outcome, an established name would move forward in the title chase.

Just as he did in the fight with Schaub, Rothwell didn’t waste a lot of time, making it clear that he was the one that was going to use this bout as a launchpad to bigger opportunities going forward.

Overeem started quickly, attacking the midsection with knees while being the clear aggressor, but just over a minute into the fight, he telegraphed a takedown attempt and Rothwell stood him up with an uppercut that left him on rubber legs. Overeem managed to lock up, shake out the cobwebs and get his legs back under him, but a minute later, an overhand right from Rothwell put him on the canvas, and this time, “Big Ben” didn’t give him a chance to recover.

After the fight was stopped, the returning heavyweight, who hadn’t fought since defeating Vera, broke out a little homage to his “Techno Viking” movements in his previous bout in the center of the cage before getting his hand raised in victory. 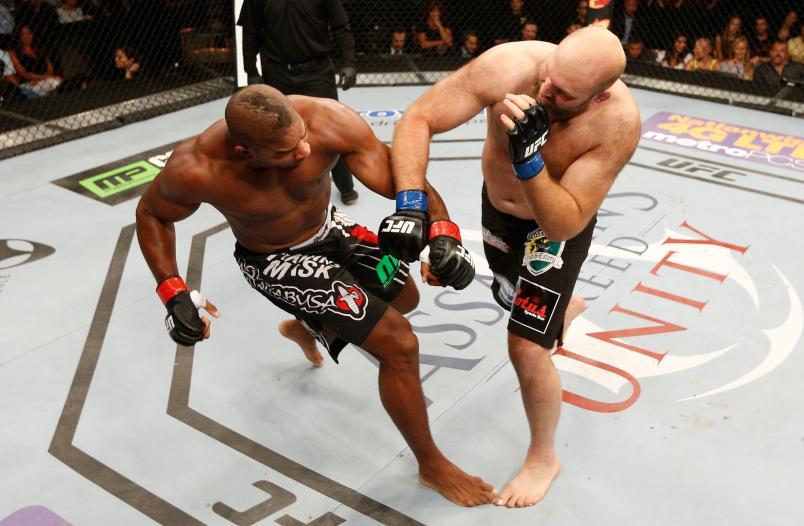 MASHANTUCKET, CT - SEPTEMBER 05: (R-L) Ben Rothwell lands an overhand right to the head of Alistair Overeem in their heavyweight bout during the UFC Fight Night event at Foxwoods Resort Casino on September 5, 2014 in Mashantucket, Connecticut. (Photo by J

Going from facing Overeem to squaring off with Mitrione might not sound like a natural progression to some, but the charismatic former Ultimate Fighter contestant was in the midst of a nice little run of his own at the time and this represented another perfectly timed matchup in the heavyweight division.

Expected to be a slugfest on the feet between two proven finishers, Rothwell instead used this fight as an opportunity to showcase his underrated submission skills.

As with several of the fights on this list, Rothwell started out a little slowly, eating some good, clean shots from Mitrione in the opening minute of the contest. In fact, Mitrione was having unchecked success for the majority of the opening two minutes, with Rothwell seeming to struggle with the former NFL defensive lineman’s quickness, but it all changed when Mitrione attempted to take the fight to the ground.

Just prior to the three-minute mark of the opening round, Mitrione looked to change levels and secure a takedown, but Rothwell defended well, using a heavy overhook to keep Mitrione at bay while bracing himself against the canvas with an outstretched right arm. In the ensuing scramble for position, Rothwell quickly clamped onto a ten-finger guillotine choke, compressing Mitrione’s head into his chest and squeezing.

As Rothwell rag-dolled him to the canvas, Mitrione quickly tapped with both hands, illustrating just how nasty this choke can be when executed correctly.

UFC on FOX 18 vs. Josh Barnett

Following his win over Mitrione, Rothwell was initially booked into an October co-main event matchup in Dublin, Ireland against Stipe Miocic that was to carry serious championship implications, but a couple of weeks prior to the event, Miocic was forced to withdraw due to injury and the bout pairing was scuttled.

A month later, Rothwell was booked to face Barnett in the co-main event of the initial UFC on FOX show of 2016 in Newark, New Jersey, and though it didn’t come with the same elevated stakes as the matchup with Miocic would have, this was yet another opportunity for the surging veteran to make his case for contention and he did just that.

The opening round was a mixed bag, with each man finding a home for a couple stiff punches, with Barnett opening a small cut over the bridge of Rothwell’s nose and “Big Ben” really starting to find a rhythm and get off his best offense in the final minute of the frame.

Rothwell started a little quicker in the second, pressing the action and forcing Barnett onto his back foot far more than he had done in the first round. With 90 seconds left in the round and the exchanges starting to take a noticeable toll on each man, Barnett closed the distance and snatched up a single leg attempt, only to have Rothwell immediately start reaching for his signature five-finger guillotine.

It took a little longer to cinch it in than it had against Mitrione, but Rothwell was still able to clamp onto Barnett’s neck, tightening the squeeze from top position as they drifted to the floor, becoming the first man to finish Barnett by submission in his lengthy career.