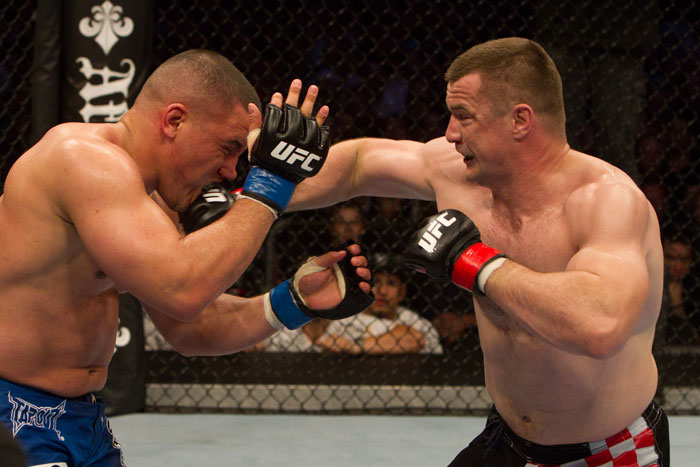 One of the most ferocious strikers in mixed martial arts history, Mirko Cro Cop has hit a rough patch in his last two bouts against Frank Mir and Brendan Schaub, but with a UFC 137 matchup against Roy Nelson on October 29th in Las Vegas, the former PRIDE star has an opportunity to start anew in the Octagon and once again show the form that has produced the following memorable moments.

KO 1 Igor Vovchanchyn – PRIDE Total Elimination 2003 – August 10, 2003
“Right leg hospital, left leg cemetery.” Maybe the greatest, and certainly the most intimidating, quote in mixed martial arts history, and it definitely applies to the fighting style of Cro Cop, who used his signature left head kick to blast out the vastly underrated Vovchanchyn out in the first round. It was Cro Cop’s sixth MMA win against no losses and two draws, and coupled with his knockout of Heath Herring two months earlier, it put him right on track for a shot at the PRIDE heavyweight title.

KO 1 Dos Caras Jr. – PRIDE Bushido 1 – October 5, 2003
Before Cro Cop would get that shot at the interim heavyweight belt though, there was a little business to be taken care of, as he helped kick off PRIDE’s Bushido series against pro wrestler Dos Caras Jr. Now mind you, this will never match some of Cro Cop’s big wins over legit competition, but as far as being a guilty pleasure, it doesn’t get any guiltier than this. Looking almost disdainful at the mask-wearing Caras (yes, he wore his pro wrestling mask during the bout), Cro Cop walked down his opponent until he saw an opening, and a single left kick to the head dropped Caras as if he were shot. It took just 46 seconds.

Lsub2 “Minotauro” Nogueira – PRIDE Final Conflict 2003 – November 9, 2003
Unbeaten in nine mixed martial arts bouts, the K-1 kickboxing standout finally got his first shot at the belt against Brazilian superstar “Minotauro” Nogueira, and for the first round of their interim title fight, Cro Cop was firing on all cylinders as he inflicted a frightful beating on Nogueira, punctuating the round with a kick to the head that dropped his foe to the canvas. Expected to finish the job in the second stanza, Cro Cop instead got taken to the mat immediately by Nogueira and submitted via armbar. It was a crushing defeat, but the first round did show what Cro Cop could do to a future Hall of Famer.

KO 1 Aleksander Emelianenko – PRIDE Final Conflict 2004 – August 15, 2004
Following the loss to Nogueira, Cro Cop won four of his next five bouts, with the only loss coming via an upset knockout by former UFC heavyweight boss Kevin Randleman (a defeat later avenged). Hoping to put himself in line for another title shot against then-champion Fedor Emelianenko, Cro Cop made his case for a championship fight by fighting the champ’s brother, Aleksander. Only problem was that Emelianenko was perhaps the most physically imposing opponent Cro Cop had met in the PRIDE ring, making him a difficult style matchup. And it was evident in the early going that the Croatian wasn’t going to walk recklessly at Emelianeko, but when he got his shot, he pounced, ripping off straight left hands that would make Manny Pacquiao blush before finishing the bout with – you guessed it – a kick to the head.

KO 1 Wanderlei Silva – PRIDE Final Conflict Absolute – September 10, 2006
After beating Aleksander Emelianenko and sending Josh Barnett, Randleman, Mark Coleman, and Ibragim Magomedov down to defeat, Cro Cop got his shot at the PRIDE belt in August of 2005, but lost a decision to Fedor Emelianenko. Two fights later, he would lose again, this time to Mark Hunt, and some questioned whether he had run his course among the best in the world. But reports of his demise were greatly exaggerated, as he proved in this 2006 Open Weight Grand Prix semifinal matchup against “The Axe Murderer”, who wasn’t only outmatched size wise, but in the striking game. Cro Cop delivered one of his most frighteningly effective performances before lowering the boom 5:22 into the bout.

Wsub1 (strikes) Josh Barnett - PRIDE Final Conflict Absolute – September 10, 2006
There would be no rest for Cro Cop after his win over Silva. In fact, he would fight fellow contender Josh Barnett for the Open Weight Grand Prix crown the same night in Saitama, Japan. But there would be no denying Cro Cop, and after he finished the former UFC heavyweight champ via strikes at the 7:32 mark of the first round, we saw the emotion come rushing to the usually stone-faced Croatian, who had just scored the biggest win of his career.

Wsub3 Pat Barry – UFC 115 – June 12, 2010
Despite three previous wins in the UFC Octagon, there was nothing that brought to mind the fearsome striker that terrorized Japanese rings for much of the previous decade. That changed in June of 2010, when Cro Cop survived two knockdowns from equally dangerous striker Pat Barry to roar back, drop Barry with his own strikes and then finish him off with a rear naked choke in the third round. Add in that Cro Cop was more accessible than ever before and after the fight, showing off his sharp sense of humor, and it was as if he finally realized that he’s at his best when he’s enjoying everything in and around the fight. If he’s in that positive state of mind again this month, Roy Nelson may be in trouble in Las Vegas.