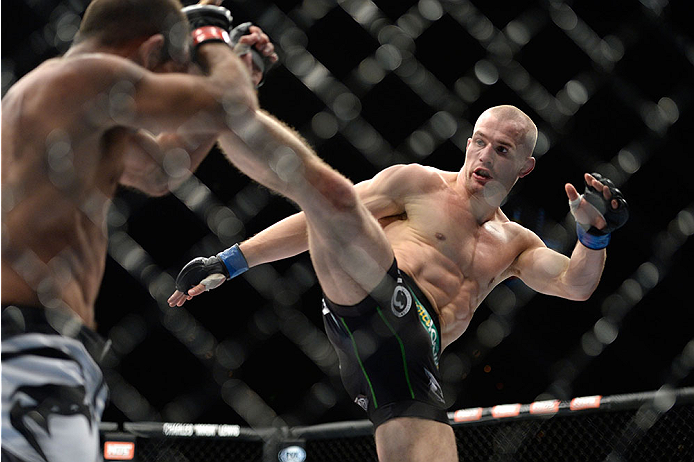 If you see Tom Niinimaki walking around in South Florida, you would probably peg him immediately as an out of towner, if only because he’s exceedingly soft-spoken and polite, two traits not normally associated with the United States (just kidding, folks).

You could say those traits apply to his fighting career as well, a point made when he was told that his upcoming opponent, Niklas Backstrom, had some nice things to say about him.

Niinimaki sighed, assuming that was the American way of sarcastically saying that the Sweden native was talking a little trash before their meeting in Berlin this Saturday. But when informed that Backstrom genuinely did have nice things to say about him, the product of Turku, Finland sounded more at ease.

“That’s Scandinavian style,” he said. “Nobody hardly ever trash talks. It’s a mutual respect for the sport and the opponent. It’s good to have some Chael Sonnens walking around, but it’s also good to have good old budo spirit, as they say.”

It is, and with Backstrom being complimentary of Niinimaki, the 31-year-old returned the favor.

“I’ve seen two or three of his fights, and years ago I trained with him, really light sparring. I know him; he’s a nice guy and a good fighter.”

So is the man dubbed “Stoneface,” a fairly new addition to the UFC roster who has one win over Rani Yahya under his belt and the hunger for more. It’s a long way from 2007, when the then-10-5-1 prospect walked away from the sport, frustrated with the idea of going it alone in a sport where having a strong support system is essential.

“There were lots of reasons,” said Niinimaki when asked about his decision to put away the gloves after a 2007 win over Bogdan Cristea. “I wasn’t motivated, and I didn’t train like I do now. Now I train five times more than I used to train back then. I wasn’t mature enough for the sport. I had a couple losses to (Hatsu) Hioki and Tristan Yunker and those were the fights that made me realize that I have to work a lot more, but I wasn’t old enough in my mind. And maybe also one of the important things is that I didn’t have the support of a coach, a manager, anything like that. I was mainly training all by myself and nobody was being supportive.”

It was a tough call for the talented grappler and kickboxer, but one he was willing to live with, at least until he was contacted by promoter Jerry Kvarnstrom in late-2009 about making a comeback. Niinimaki pondered the idea for a while, but it was a chat with a longtime friend that helped him agree to return.

“In 2010, when my friend asked me to fight again in his promotion, I talked about this with my good friend Jussi (Rauhala), who has been my friend forever, and he said he could help me for preparation,” he said. “Then I realized that when there is somebody who helps you and pushes you forward, then the results will come. Maybe that was the main reason; I didn’t have any support and the push forward back then.”

Eleven consecutive wins without a loss have followed for Niinimaki, including the victory over Yahya and wins over Walel Watson and Chase Beebe, clearly proving that he still has what it takes to compete at the highest level of this game. But after his initial break, he had to wonder – even if only for a moment – whether he still had the goods.

“Of course, but that was a good motivator for me,” he said. “My second fight when I came back was in front of my hometown and my family and everybody, so it was a good motivator. I trained hard, I worked hard, and I learned that through hard work, you can achieve something. The fighting is easy, the training is hard. So I was worried of course, but that pushed me forward.”

And now he’s here, not just a UFC fighter, but a full-time mixed martial artist who has landed in the Blackzilians camp in Florida, where he will prepare for his fights with some of the best in the world.

“The first time I was here was two and a half years ago, and I have lots of friends and my management here,” he said. “So there were lots of reasons (to work with the Blackzilians). Of course, the camp is one of the best in the world, so I think that’s enough reason for me to come here.”

That’s as good as any, and despite a change in opponent from Thiago Tavares to Backstrom, Niinimaki hasn’t missed a step in his preparation.

“There were hardly any changes,” he said. “Usually when I train, I don’t train for a certain opponent; I train like I always do. I’ve learned along my career that opponents change a lot, so I don’t want to train for something and it changes and then it goes bad. I just try to acknowledge what the opponent does well and what his weaknesses are, and I mentally try to get into a good mode.”

He’s in that mode now, and if he stays there, he expects an even brighter future that has nothing to do with the sunny skies in Boca Raton.

“I see me staying focused, winning fights, and good things will come.”