It was 3:45am local time on Sunday morning when top light heavyweight contenders Anthony Johnson and Alexander Gustafsson got down to business in the UFC Fight Night main event at the 30,000-seat Tele2 Arena in Stockholm, Sweden, but it was only a little over two minutes later that Johnson earned the next shot at 205-pound champion Jon Jones with a stunning first-round TKO that shocked Gustafsson’s hometown fans. 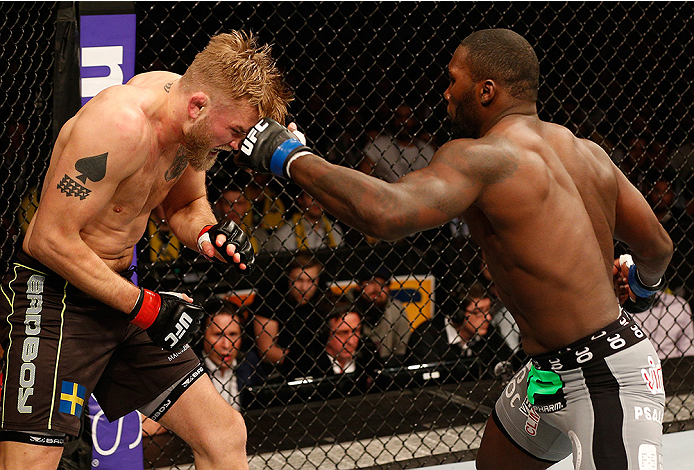 Now it’s on to Jones for Johnson, whose ninth consecutive win was the third of his second run in the UFC, and clearly the biggest yet.

“Jon Jones, I hope you get well brother,” the number three-ranked Johnson said. “Let’s get this championship fight on and make the crowd and the fans excited about this.”

They’re probably excited already, given Johnson’s stellar performance in the most important fight of his career.

Johnson came out ready to “Rumble” and swinging for the fences. The number one-ranked Gustafsson used lateral movement and leg kicks well in order to slow his foe down. An inadvertent poke to the eye by Gustafsson in the second minute brought a momentary halt to the action, but when the fight resumed, Johnson put Gustafsson down to a knee with a hard right hand.

Gustafsson tried to recover, but the Floridian was relentless in his pursuit of “The Mauler,” blasting him with a kick to the head and then following up with a series of ground strikes when the Stockholm native tumbled to the mat. Referee Marc Goddard gave Gustafsson every opportunity to fight back, but eventually the barrage of unanswered blows brought a halt to the fight at the 2:15 mark.

“I felt great coming in here, I felt great in the couple of minutes that we fought, and he just caught me,” Gustafsson said. “I got caught and that’s what happened.”