When The Fights Went To The Mat, These Athletes Made It Look Like A Work Of Art
By Thomas Gerbasi, on Twitter @tgerbasi, and E. Spencer Kyte, on Twitter @spencerkyte • Dec. 21, 2022

The highly unofficial awards season continues with the best submissions of 2022 and how we saw them on fight night ... 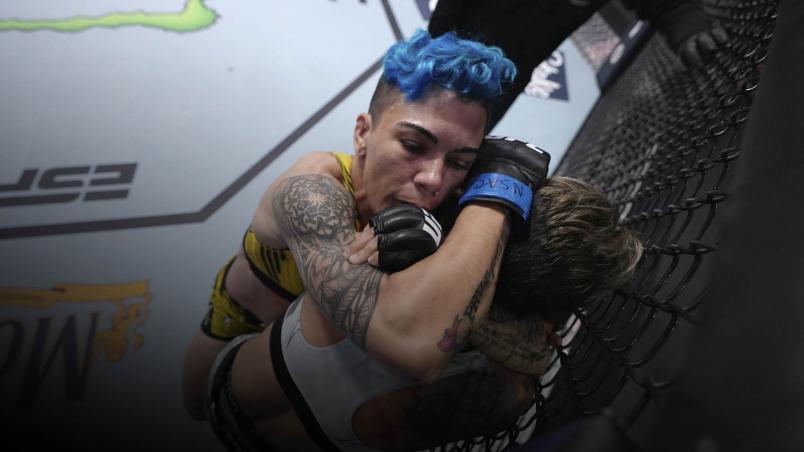 Former strawweight champion Jessica Andrade made a successful return to 115 pounds in the UFC Fight Night main event, as she submitted Amanda Lemos in the first round.

Lemos was the clear aggressor as the fight began and she landed several hard kicks until midway through the round, when Andrade locked in the standing arm triangle choke that ended Lemos’ night at 3:13 of the first round. 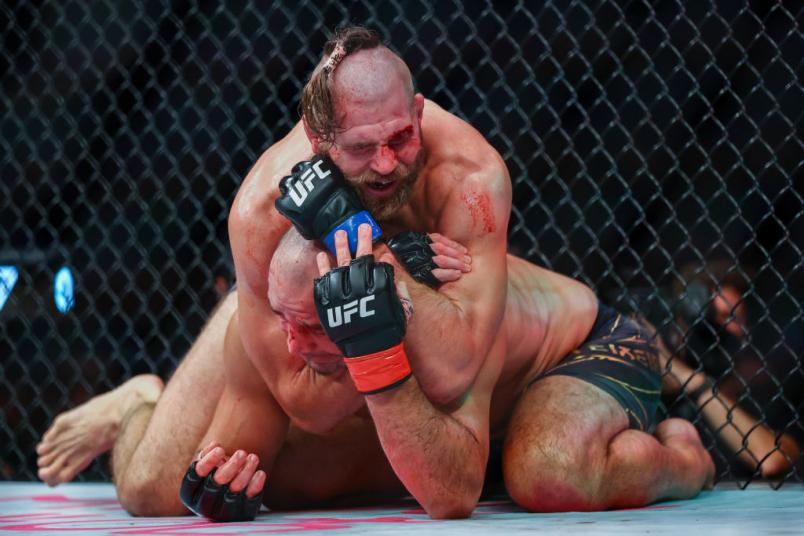 In a division that has had its share of classic championship battles, Jiri Prochazka and Glover Teixeira added their own chapter to light heavyweight lore in the main event of UFC 275 in Singapore, with Prochazka seizing the 205-pound crown from Teixeira via fifth-round submission in just his third UFC bout.

Prochazka switched stances as the bout began as he looked for openings, but it was the champion who scored early before getting the fight to the mat in the second minute of the fight. On the mat, Teixeira fired off strikes and moved into side control as Prochazka tried to get back to his feet. With a little over two minutes left, the challenger got his wish, but moments later, he was back on the mat, this time with Teixeira in the mount position. The follow-up strikes were thudding, forcing Prochazka to give up his back, but he made it to his feet and fired off a series of ground strikes that were equally damaging before the round ended.

The challenger looked comfortable as round two commenced, and he had success with a variety of striking attacks. In the second minute, a right hand jarred Teixeira and prompted a pair of desperate takedown attempts. Prochazka defended well and kept the assault coming, but out of nowhere, Teixeira put Prochazka down on the mat and now it was the Brazilian’s opportunity to turn on the offense, which he did with a series of elbows that cut Prochazka over the left eye right before the horn sounded.

Prochazka defended Teixeira’s first takedown attempt of round three and again had success with his unorthodox striking. Most notably, a short left that jarred the champion. But just when it looked like Prochazka was going to pull away, Teixeira got a takedown two minutes in. This time, Prochazka got back to his feet quickly and landed a hard body shot on his bloodied foe, and moments later he was unloading strikes on the grounded Teixeira. The champion refuse to back down, though, and with under a minute left, it was Teixeira on top and landing the shots.

After some back and forth striking from the two 205-pounders to start the fourth, Teixeira took Prochazka down in the second minute and went to work, getting into the mount just before the midway point. Teixeira then looked for an arm triangle choke twice. After Prochazka got free, he got into the top position, but then it was Teixeira getting his opponent’s back briefly before another change in position, leaving Prochazka in control at the horn.

A right hand by Teixeira stunned and nearly stopped Prochazka early in the final round, but a subsequent guillotine choke attempt saw the challenger slip out and get his wits back as they grappled on the mat. Once standing, Prochazka fired off shots, but it was Teixeira getting the better of the exchanges, landing another big right midway through the frame before getting another takedown. In the full mount, Teixeira appeared to be in complete control, but it was Prochazka escaping once more, and out of nowhere, he sunk in a rear naked choke that forced a tap out at 4:32 of the fifth round. Wow. 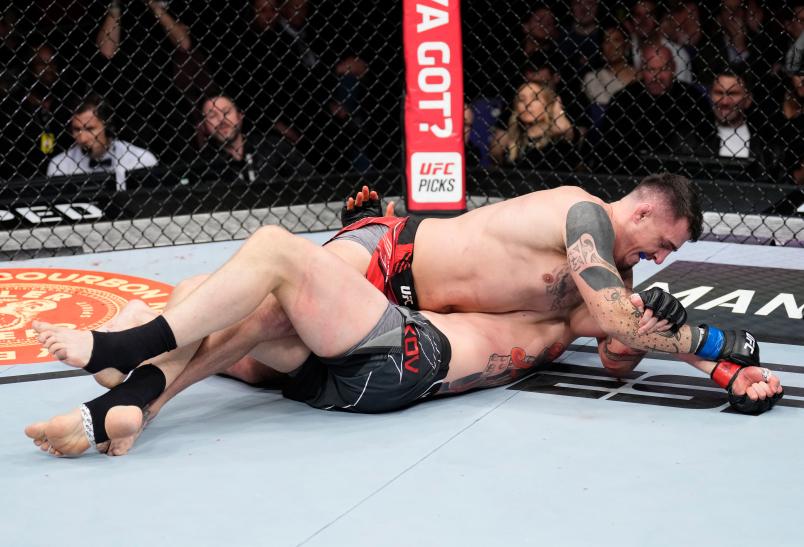 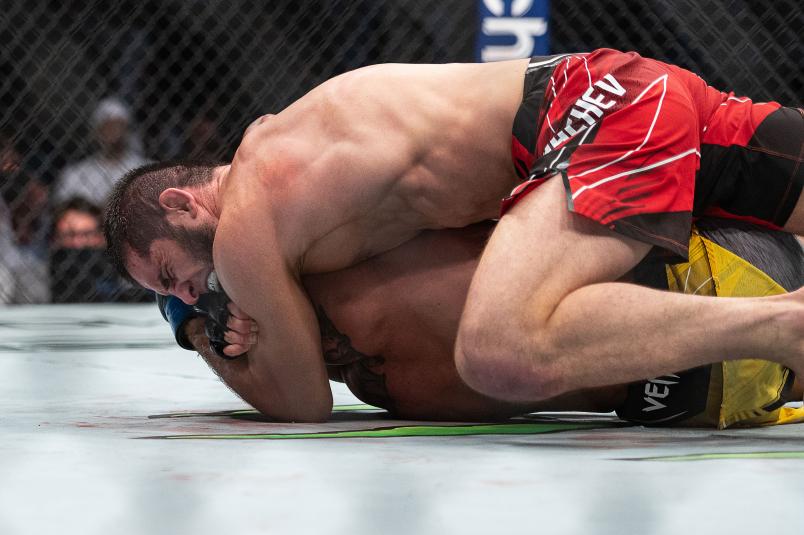 The Russian standout dominated Charles Oliveira, controlling the action throughout the first round before dropping the Brazilian with a left hand, following him to the canvas, and securing the choke. As soon as he stepped out of half-guard, Oliveira tapped.

This was an absolutely blistering effort from the newly minted champion, who has now won 11 straight, answering any questions people had about his ability to compete with the elite talent in the lightweight division.

The champion has a name and it is Islam Makhachev. 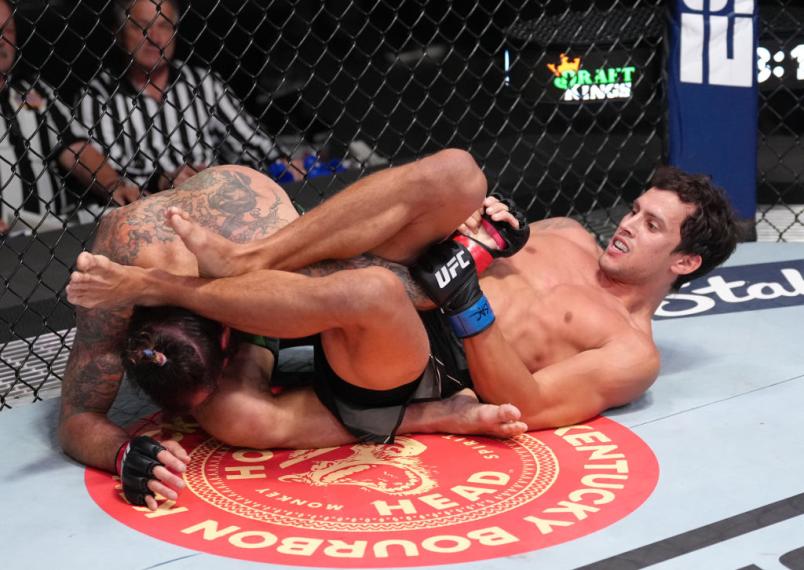 Claudio Puelles of Peru works for a submission against Clay Guida in a lightweight fight during the UFC Fight Night event at UFC APEX on April 23, 2022 in Las Vegas, Nevada. (Photo by Jeff Bottari/Zuffa LLC)

Peruvian lightweight prospect Claudio Puelles made it five straight wins in the co-main event, as he submitted Clay Guida in the opening round.

The fight went to the mat in the opening minute, Guida on top but Puelles aggressively going after submissions. Guida defended well and scrambled his way out of trouble, but only momentarily, as Puelles locked in the kneebar that forced the tap out at 3:01 of the first round. 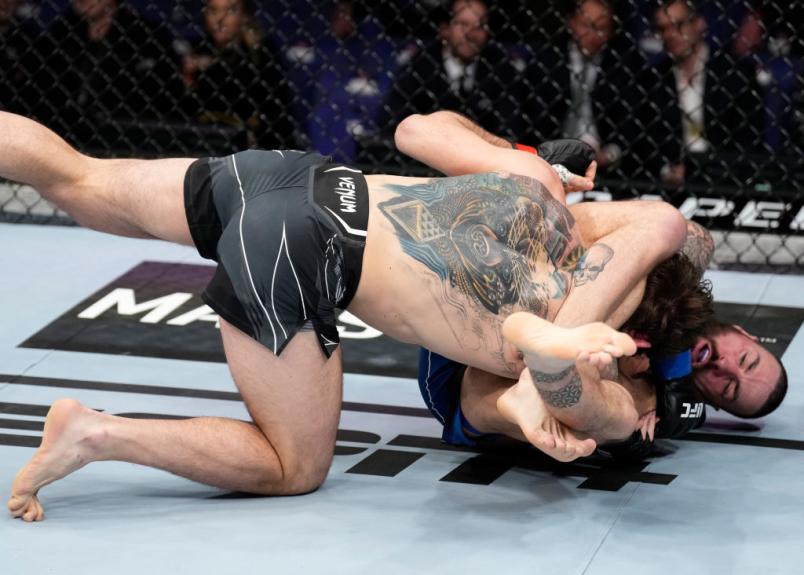 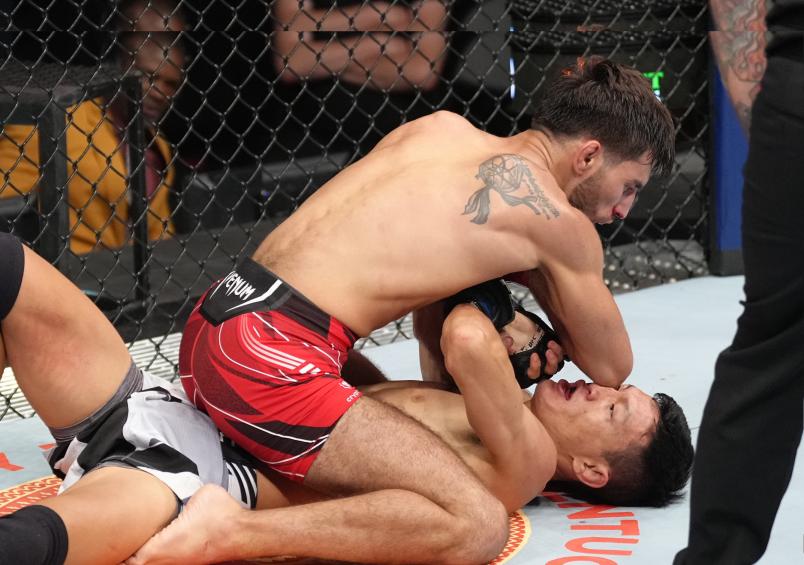 Matt Schnell elbows Sumudaerji of China in a flyweight fight during the UFC Fight Night event at UBS Arena on July 16, 2022 in Elmont, New York. (Photo by Jeff Bottari/Zuffa LLC)

Matt Schnell pulled off one of the most incredible comebacks in UFC history on Saturday, rallying from being on the brink of being finished to choke out Sumudaerji in an absolutely insane fight.

The first was a more technical round, with Schnell hitting a lovely takedown and attacking off his back, while Sumudaerji used his length to wriggle free and have quality moments of his own. In the second, “The Tibetan Eagle” found his range and took it to Schnell, freezing him in place with a series of left hands and short, framed-off elbows that had referee Jacob Montalvo taking a close look.

Somehow, Schnell not only survived the onslaught, but turned the tables, hitting a well-timed takedown and quickly climbing into mount after stinging Sumudaerji on the feet. From there, “Danger” unleashed a storm of elbows that split the Chinese athlete open before locking in a triangle choke and putting his opponent to sleep.

Just an absolutely chaotic affair and a tremendous show of resiliency from Schnell. The Louisiana native picked up his sixth UFC victory and 16th career win overall with the second-round submission finish. 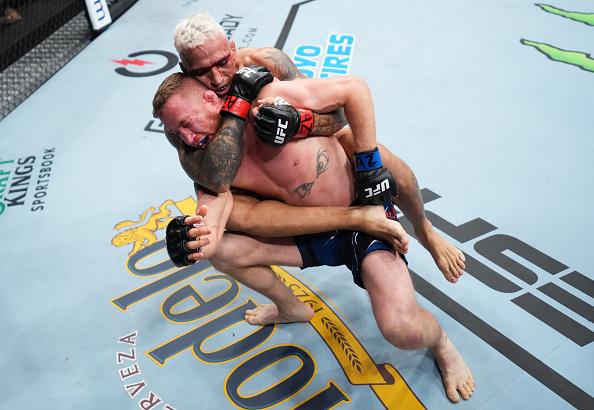 Charles Oliveira of Brazil secures a rear choke submission against Justin Gaethje in the UFC lightweight championship fight during the UFC 274 event at Footprint Center on May 07, 2022 in Phoenix, Arizona. (Photo by Chris Unger/Zuffa LLC)

Charles Oliveira may not be going home to Brazil with his world championship after missing weight for the UFC 274 main event, but he will get on the plane with his status as the best lightweight in the world intact after a first-round submission victory over Justin Gaethje.

Oliveira staggered Gaethje with a right hand to open the bout, and then landed another hard shot, only to drop Oliveira twice. Now bloodied, Oliveira remained in the pocket with Gaethje but then pulled guard with three minutes to go. Gaethje wasn’t having it, and he stood up and resumed swinging, but it was Gaethje who got dropped hard with a right hand. Oliveira pounced, and moments later, he sunk in the rear naked choke that produced a tap out at 3:22 of the first round.

Oliveira, who missed weight at 155.5 pounds, moves to 33-8, 1 NC with the win and will now be installed as the number one contender. Gaethje, a former interim champion, falls to 23-4. 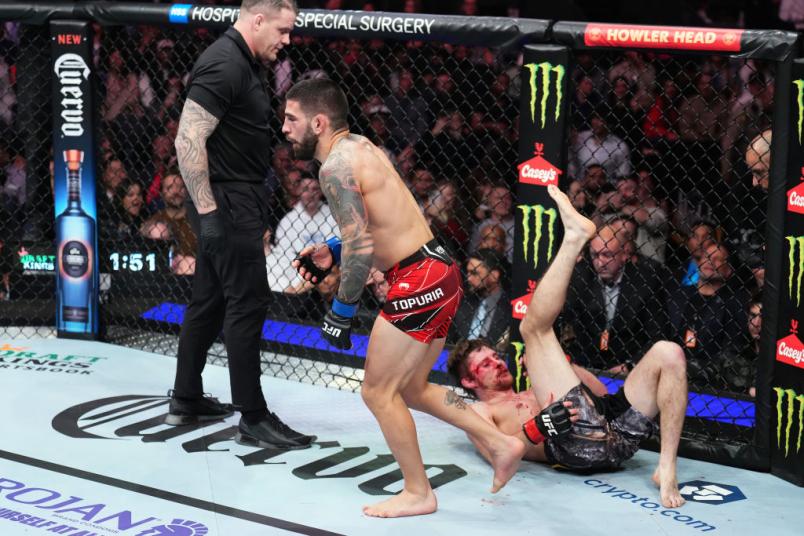 Saturday night, the 25-year-old from Georgia kicked off the UFC 282 pay-per-view with a dominant stoppage win against fellow featherweight hopeful Bryce Mitchell, squeezing out a tap in the second round.

Topuria got the better of things in the standup in the first, but Mitchell closed the round in top position, giving him a little confidence heading into the middle stanza. But Topuria was having none of it. “El Matador” took it to Mitchell in the second, hurting him on the feet and before rag-dolling him to the canvas, floating into side control, and securing the fight ending choke.

Now 5-0 in the UFC and 13-0 overall, Topuria should find himself in the Top 10 when the rankings update next week, and remains one to watch in the featherweight division. 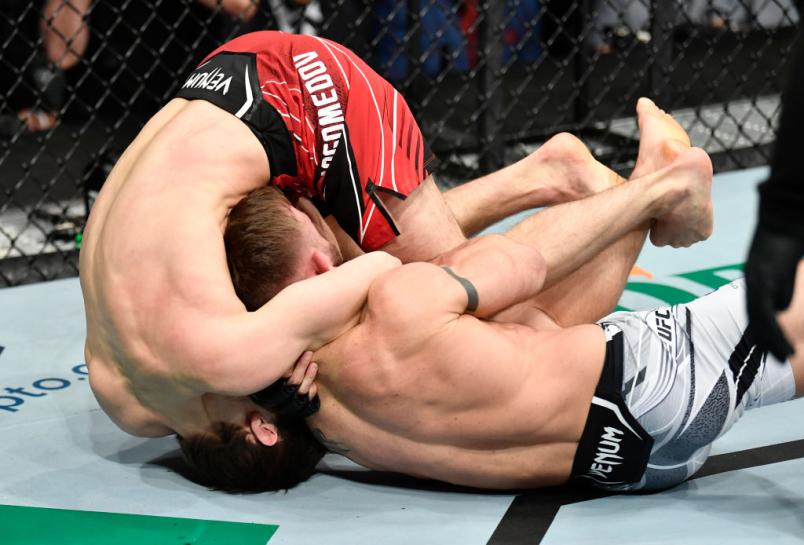 Said Nurmagomedov of Russia secures a guillotine choke against Cody Stamann in their bantamweight fight during the UFC 270 event at Honda Center on January 22, 2022 in Anaheim, California. (Photo by Chris Unger/Zuffa LLC)

Said Nurmagomedov scored a statement-making win in bantamweight action, as he submitted veteran standout Cody Stamann in less than a minute.

Nurmagomedov came out with spinning techniques and sharp striking, prompting Stamann to look for the takedown, but the Russian adjusted well, sinking in the guillotine choke that forced the tap out at :47 of round one.