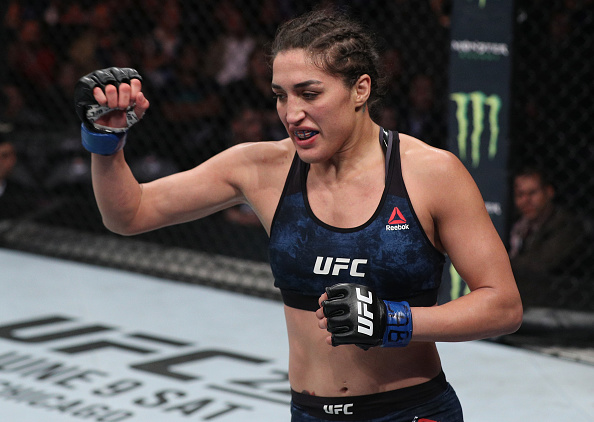 It would be easy for Tatiana Suarez to start getting a little cocky. She’s unbeaten as a pro, an Ultimate Fighter winner and three UFC wins in which she’s dominated her opposition. But if former strawweight world champion Carla Esparza hopes to catch Suarez napping in their UFC 228 bout this weekend, that’s not happening.

“I'm humble because I always feel like on any given day, it might not be your day,” Suarez said. “I don't care that I ran through my last opponent, because there's another opponent in front of me that I have to get through. So I never think it's going to be like the last fight. There are always new challenges with every person and people match up differently because everybody has different strengths in certain areas. So I always want to get better.”

This isn’t false humility, either, but something ingrained in Suarez’ DNA since she was a child.

“I remember my mom bought me a pogo stick and at first I was horrible at it,” Suarez laughs. “And I stayed out there all day because I could not accept the fact that I was terrible at pogo sticking. That's just my personality.”

Suarez doesn’t reveal if she ever became the pogo sticking queen of California, but there is no debate about her skills as a wrestler and now as a mixed martial artist. But from her childhood to now, there were times when her skill and hard work weren’t enough to keep her from dealing with dark days, most notably a bout with thyroid cancer that ended her quest for the 2012 Olympics. It was then that her fighter’s heart came to the forefront as she beat back her toughest opponent. That doesn’t mean it was easy, though.

“I've had life changing experiences at such a young age and I think a lot of times, people don't really understand the magnitude of what I really had to go through,” Suarez said. “I had to stop wrestling and I went through cancer and I don't think people realize the actual struggle that I had to go through mentally and emotionally. It was a really difficult time for me. There was a lot of really sad depression where I looked at myself and I didn't really know who I was anymore because I couldn't wrestle anymore and that was really hard for me.”

After her darkest hours, MMA was her lifeline, and now she has become a beacon of light for those who may be going through the same struggles she did.

“I found MMA and it was a huge blessing in my life because I have something in my life that I truly love, and I get up really excited every morning to do something and not many people get to wake up every morning and be like, 'Yeah, I really love my job.' And I also get to inspire others along the way and that’s such a huge blessing. I'm just really happy that I can do that for somebody because it makes a huge difference. Sometimes it can save a life. Everybody goes through those tough times and I think God put this stuff in my path so I can help others. So I'm definitely grateful for my struggles and the things that I had to go through in order to get here. I feel like it's made me a much stronger person.”

As she admits, it’s also made her a better teammate and subsequently a better fighter. And as she gets better, she gets 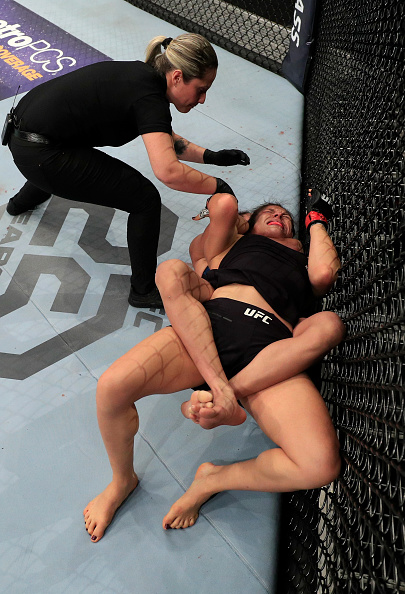 scarier, with many believing that a win over Esparza will push her from the number nine spot in the strawweight rankings into the top five and the title picture. But she’s not addressing such talk. Not yet.

“I don't really focus on that kind of stuff,” Suarez said. “I just focus on the task at hand and I don't think about what's to come. If I take care of business and do what I have to do, those things will come. I'm in no rush.”

So Suarez is the patient sort?

“I am actually very impatient,” she laughs. “But when it comes to this kind of stuff, I'm not really impatient at all. I know that when I'm victorious and I do what I have to do and I take care of business, those things will eventually come. I don't think I really need to focus so much on when I'm gonna get it. Right now I'm focusing on becoming a better martial artist and getting better every day and learning all the tricks of the trade. I'll never know everything, but I'll definitely get a lot better. I'm so young to the sport still and it's okay for me to not rush. I believe in myself and when I make it to the title fight, I know that I'll be ready. I just have to be patient and trust in my training.”

And for the record, that training isn’t just focusing on her wrestling. She’s a mixed martial artist and she’s training for a fight. That isn’t always the case with opponents who assume that trying to build up their wrestling is the key to victory against the Bellflower native.

“I think that's so funny when people fight me and they say, ‘oh, I'm gonna focus on my wrestling,’” said Suarez. “They go to all these centers and they focus on their wrestling for eight weeks. And I'm like, I'm sorry, but eight weeks is not gonna trump my 24 years of wrestling. Let's just put it that way. I think it's crazy that people do that. They focus so much on making it a wrestling thing, but I have a million different things. People have only seen one percent of my wrestling because I really haven't had to use a lot. There's a lot of mystery behind me.”

In other words, we ain’t seen nothin’ yet from Tatiana Suarez.

“I feel really good right now and I just can't wait to put everything out there in the Octagon,” she said. “I know everybody wants to see this fight and I'm really excited about the fight in general because we're both grapplers and I feel like it's a good test for me. I think the harder I'm pushed, the better I get.”