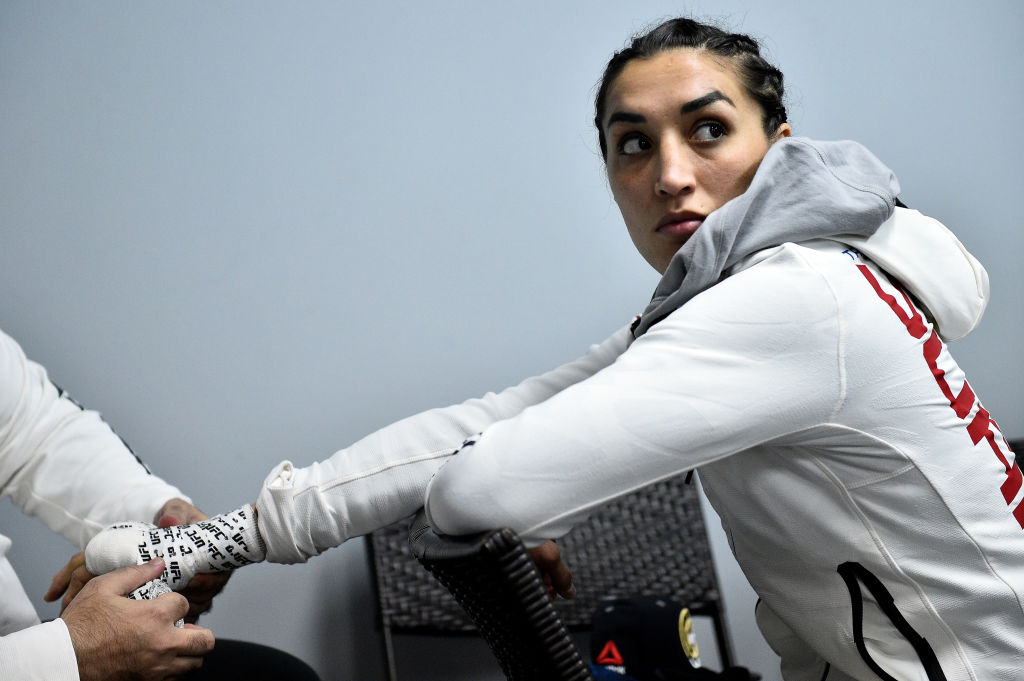 They are starting to call her the “female Khabib,” and it’s not entirely unwarranted. Running through each and every opponent with a wrestling prowess seldom seen, the former Olympian now finds herself in the Top 10 UFC strawweights, with few signs of slowing.
Yet, if you’re expecting cockiness or arrogance, you’re not going to find it when you talk to Suarez. Instead there is a quiet confidence that’s rooted in realism, and a measured approach when it comes to her continued ascent.
Her UFC 228 bout against fellow wrestling expert Carla Esparza is her biggest fight to date, and we caught up with her in Dallas to talk about it.
UFC: You’ve said that you were so focused on wrestling when you were young that you missed out on milestones like your prom. Is your focus any different now that you’re in MMA?
TS: No, it’s pretty much the same! I sacrifice a lot to be focused on my training. Sometimes you sacrifice time with your family, which sucks. But I know the people that really love you, really care about you and understand why you’re doing. They understand what you’re focused on, your end-goals and stuff like that. Also, I have very few friends [laughs]. I’ve heard a lot that certain fighters have very few friends just because you get busy, you get tired after training. A lot of times you’re not able to make those meetings or hang out with them. But the real friends are like “Oh, I understand what you’re going through, I understand you’re tired. We support your dreams anyway.”
But now, after every [fight] I go and try to travel somewhere. This time I’m thinking, like, Thailand or Bali or something like that. Last time it was Chicago for UFC 225. I’d never been there before, and even though it was a really quick trip, it was nice to get out and explore.
UFC: For somebody that has your kind of focus, how did you get through that long layoff where you were injured [from July 2016 to Nov. 2017]?

TS: Even though my shoulder way messed up, I can still use my legs, right? And I can use my left arm. So I just got sharper with my left arm, and I built up some more strength in my legs. I feel like every injury is sort of a blessing, because it teaches you to work around something and to not be so narrow-minded. When you can use two hand or two legs, you’re able to do everything. But when you are faced with more challenges, it teaches you to use your brain a little differently; it’s like a different kind of puzzle. Every injury forces you to overcome some type of adversity.
RELATED: Suarez Still Humble
UFC: If someone who had never seen an MMA fight looked at your record and your opponent’s record, they would conclude Carla has more fights and therefore more experience. Why is that not going to matter on Saturday?
TS: I don’t think it’s going to be a factor just because I’ve had a lot of experience in other areas. II probably have ten times more wrestling matches than she has ever wrestled. In my mind, I’ve been in that competition mode many more times than she has, so that’s probably the difference. For me, I don’t feel like experience always matters. I feel like it’s what’s in here [taps on chest]. I have a lot of heart. And I’m sure she does, too, but I feel like that is going to be the difference.
UFC: When you do fight Carla, what’s something you need to be careful about?

TS: I have to be careful for everything, she’s a pretty well-rounded fighter. I don’t feel like there’s anywhere where she’s horrible. I think she’s a great fighter. I think this is going to be a good test for me, a way to show that I am at the top, and that I’m the best strawweight in the world.
UFC: I asked this to Carla as well: what is something you both have as a result of being Ultimate Fighter alumni that maybe other fighters don’t have?
TS: That experience is very rare. It’s a very, very interesting experience. I think what it taught me the most is to be able to get though it mentally when you don’t have your friends or your family or your coaches there to help you or bring you up. Being on the show and being secluded from everything and everyone, you really have to rely on yourself. So it’s a mental toughness that you have to have going through that show.
UFC: You’ve said that you’ve only done one percent of what you’re capable of. Can you talk a little bit about that?
TS: I feel like my fights have been pretty quick, an no one has really challenged me yet, so I feel like people haven’t seen the whole Tatiana. I’m just really excited. I feel like Carla can pull that out of me, she can help me show more things to the world. I think everybody has only seen a very, very small portion of what I can do, and I think that’s [true] with any fighter. You go into a cage and you only fight for 15 minutes--you can only see so much.
For me, a lot of my fights have been pretty short, and the one that I did have that went the distance, I dominated the entire fight, so I just think people haven’t seen everything.
UFC: We know you’re focused on your fight on Saturday, but you must also hear the prognosticators who have you pegged as the next big thing or even the next champion. How do you balance those things?

"When I take care of business, those other things will come." @TSPMMA115 Tatiana Suarez talks about how she tunes out the hype and continues the march forward. #UFC228 Full Q&A: https://t.co/cNGKaF5rbR pic.twitter.com/9Q9dAINYAW
— UFC News (@UFCNews) September 7, 2018

TS: I don’t really focus on those things, I focus on who is in front of me. When I take care of business, those other things will come. A lot of times people focus on this big picture, but the key to success is to focus on little things, and right now it’s Carla…you just need to focus on the task at hand and not other things. I feel like people always worry about being on the main card, being this and that. Me? I don’t care about any of that stuff. The only thing that matters to me is getting in that Octagon and taking care of business, having fun, and doing what I love to do. This is something that I love, that I enjoy, that’s a part of me. I feel like it’s very big blessing to be able to do this, to compete at the top level of the world. I’m really fortunate.