Suarez back and going hard against anyone and everyone 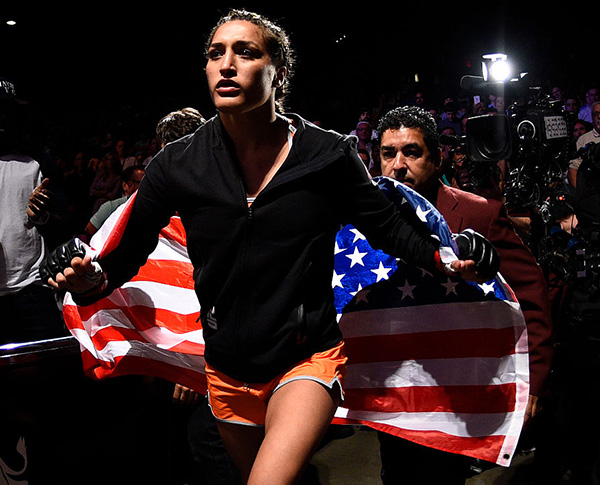 Tatiana Suarez prepares to enter the Octagon before her women's strawweight bout against Amanda Cooper during The Ultimate Fighter Finale event at MGM Grand Garden Arena on July 8, 2016 in Las Vegas, NV (Photo by Jeff Bottari/Zuffa LLC)" align="center" />The win was as spectacular as Tatiana Suarez could have hoped for, a submission victory over Amanda Cooper in July 2016 that took less than four minutes and earned her The Ultimate Fighter 23 crown and a Performance of the Night bonus.

Then she disappeared as the strawweight division moved on without her. On Saturday, the 26-year-old returns to active duty when she faces fellow unbeaten Viviane Pereira in Norfolk, Virginia.

So where has the pride of Rancho Cucamonga been?

“I got injured so I had to take some time off to get surgery and rehabilitate my shoulder, so that's where I've been.”

It’s the bane of every fighter, the realization that the body just doesn’t care about how much momentum you’ve built up or how promising your career is. Sometimes, the body just has other ideas. In Suarez’ case, it was a particular blow, because after beating thyroid cancer, it had been smooth sailing for her healthwise and with her career, with TUF taking things to a new level for her both in terms of experience and notoriety.

“At first I was really bummed out because I felt I was on a roll,” she said of the time on the sidelines. “Before the UFC, I only had three professional fights, and for me, the show was the best thing because I could get this exposure, but at the same time I would get cage time and experience, which is important. A lot of times you can do stuff in practice, but it's completely different when all eyes are on you, there's people yelling, the crowd goes crazy even if you don't get hit hard and it gets you riled up. So that cage time is necessary.”

She’s back on the horse this weekend, but to get there, she had to make some adjustments in the gym, where she admits she can be a little “ruthless” in terms of going hard against anyone and everyone.

“Staying healthy is my number one now,” Suarez said. “I'm like a little spider monkey, I'm really crazy. (Laughs) And my coaches are like, 'Oh my goodness, you can only roll with certain people the week of your fight because we're so scared.' And that's even months in advance. They want to try and take care of me because I'm a little on the ruthless side and I have a tough time speaking up at times. I'll go into practice and somebody that's much bigger than me will ask me to roll and I'll say, ‘Yeah, sure.’ I don't care if they're 200 pounds. Now I'll say I probably shouldn't do that because I can get hurt. So it's been a wake-up call. If I want a long career, I need to be a lot smarter about my training and my training partners.”

And now that she’s back and with this new attitude about training smarter, not harder, she can pick up where she left off against Brazil’s Pereira. A win in this clash of prospects could propel her into the top 15 in a weight class that looks a lot different after the introduction of the flyweight division and Rose Namajunas’ win over Joanna Jedrzejczyk last weekend to take the 115-pound title.

“I wouldn't say I was surprised, just because I believe that Rose's boxing is pretty good and she has a long range as well,” Suarez said of the UFC 217 upset. “I just think stylistically, it was a harder matchup for Joanna because Rose is very elusive. So I saw that it could happen, and it did.”

What it truly did was open the door for a lot of strawweights to take a quicker route to a title fight than they might have had with Jedrzejczyk on top of the heap and at the point where she would solely be taking the “big” fights. Suarez is one of those fighters, and while she isn’t rushing things she does have her sights on gold. 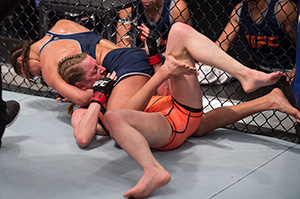 Kate Jackson during the filming of The Ultimate Fighter: Team Joanna vs Team Claudia at the UFC TUF Gym on March 2, 2016 in Las Vegas, Nevada. (Photo by Elliot Howard/Zuffa LLC)" align="left" />“Obviously, I want the belt, that's what everybody strives for,” she said. “No one walks into the gym and is like, 'I think I'm gonna settle for fifth-ranked.' No one does that. But it doesn't matter who's at the top. I'm not chasing somebody; I'm chasing becoming a better version of myself every single time I step into the cage. If you do the work and put in the time and make the sacrifices needed, you'll go out there and perform well. So, for me, I know my time will come. I just need to be patient and focus on the task at hand. If you're always looking at the future and not focusing on what's in front of you, a lot of times that's what will get you to lose focus on what's important at that time. I need to beat my next opponent and then see what happens from there.”

It all begins with her return on Saturday, one she’s waited over a year for. And though one would assume she would wish that fight night was here yesterday, that’s not the case because she’s just taking it all in.

“I like fight week, I like the whole thing behind it - the build-up, the weigh-in, everything like that,” she laughs. “I enjoy the experience, I like to be around all the people from the UFC, so I can wait a few more days. That's nothing compared to how long I've waited to get back. I'm excited, but I like everything before it too. Except for the weight cut.”