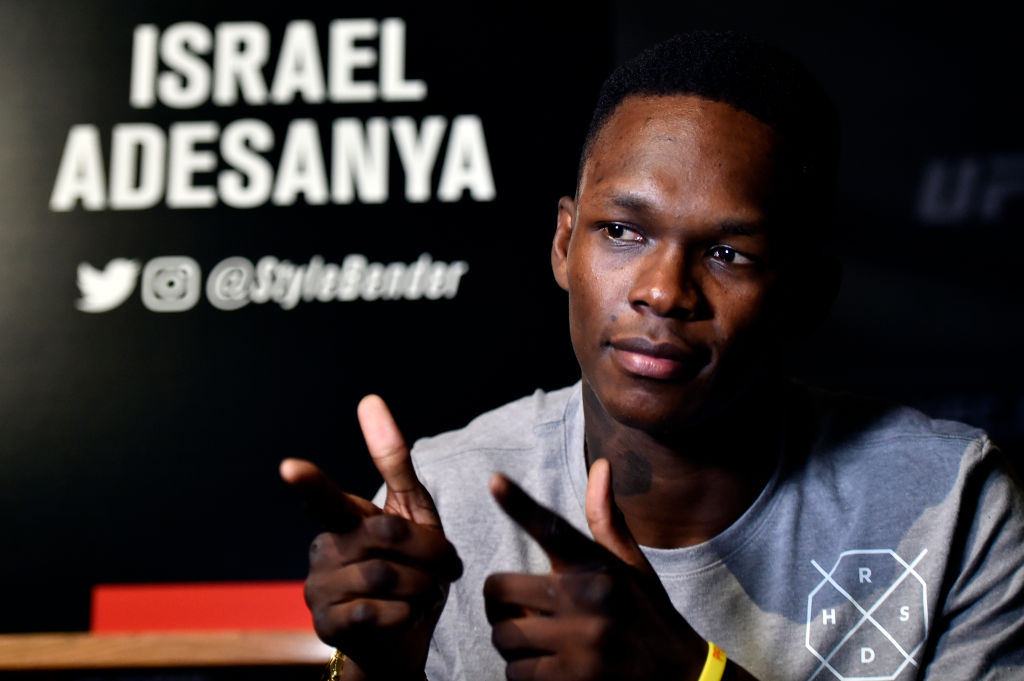 The buzz is deafening when it comes to the UFC debut of Israel Adesanya this weekend in Perth, and for good reason. Owner of an 11-0 pro MMA record, with all wins coming by way of knockout, Adesanya also picked up 75 pro kickboxing wins over the years while becoming a viral sensation for his highlight reel finishes.

So big things are expected when “The Last Stylebender” faces Rob Wilkinson at UFC 221, but that kind of pressure isn’t affecting the 28-year-old in the slightest.

“Pressure makes diamonds,” he said. “It's like anything else. You just have to harness the energy and use it the right way, rather than let it overwhelm you. A lot of guys don't have the experience or mind state that I have, so they feel that pressure of being in the UFC and then they crumble. I walked with my teammate, Dan Hooker, out to the cage at UFC 219 and I was walking I realized that I've been doing this. So it was nothing new to me. Same energy, different cage.”

Who is The @Stylebender?

As for the buzz, he’s heard it. And not just over the last couple months, but more like the last ten years.

“I started fighting in 2008, and ever since my first fight, every fight's been like that,” Adesanya said. “Not on this level yet, but it's always been, 'You've got to watch out for this guy,' so it's nothing new for me, and I've adjusted to the hype itself. I've been doing this for a while and I've felt the same buzz the whole time.”

Confidence aside, there is the impression that Adesanya may be “the one” in the middleweight division. He has all the tools on fight night, but there is also a charisma that you can fake or develop. You either have it or you don’t, and it’s clear that Adesanya isn’t like everyone else. It even goes down to his accent, which almost sounds American, even though he was born in Nigeria and lives in New Zealand.

“For me as a kid, I never even knew what accents were,” he laughs. “When I was moving to New Zealand, I didn't even know where that was. I think I was just influenced by TV and rap music as a kid. Coming up, you watch Power Rangers and Ninja Turtles and all that stuff and it just clings on to you. I sort of sound like you guys, but it depends who I'm talking to. If I speak to my Nigerian people, I sound like a Nigerian because it's just human nature I guess. I adapt.”

He adapts when it’s time to fight as well, which is important because the key to his future success isn’t in his striking, but in his ability to adjust if and when he’s taken down. Another decorated striker, Muslim Salikhov, found that out the hard way in his UFC debut against Alex Garcia. Will Adesanya suffer the same fate against Wilkinson, who the Lagos native said will want to “hug me hard?”

“I welcome them to try and stand with me, but I know they won't, so I know they'll try to hug me and drag me to the ground,” he said. “I fought a sambo guy when I was in China, he's a multiple-time champion and he got me down, I got back up. Got me down, I got back up, and by the third time, he couldn't get me down and I could see that look on his face of panic. He was really good on the ground and he felt strong, but I knew how to frame and I’ve got my techniques.”

The jiu-jitsu blue belt under Andre Galvao is ready for the ground aces of the UFC, then?

“People don't even know,” Adesanya said. “I've been doing this for years. They think I'm some guy that just started learning how to grapple a year ago. That's fake news. I've been doing this for a long time and I welcome them to try. If they get me down, they're gonna see what I can do off my back or see what my top game's like. No one's got there yet, so if it ain't broke, don't try to fix it.”

Good point, and it’s up to Wilkinson to try and break his foe this weekend. But Adesanya doesn’t appear to be the breaking type. So what should UFC fans expect from the newest member of the roster?

“Expect the unexpected,” Adesanya said. “I adapt very well, so you never know what to expect from me. But just know that I bring my best every single time. I'm flamboyant, I'm confident, and I let them know what's up, even when I'm fighting them. I'm just having fun. It's about having a good time.”