“I have no words,” said the Brazilian contender, who scored the biggest win of his career in the UFC Fight Night main event.

It was quick and it was shocking, but now the 155-pound title contenders’ club has a new member, and he’s ready for whatever is next.

“Benson Henderson is a great champion, I respect him a lot, but this is my time,” said Dos Anjos, who has now won seven of his last eight. 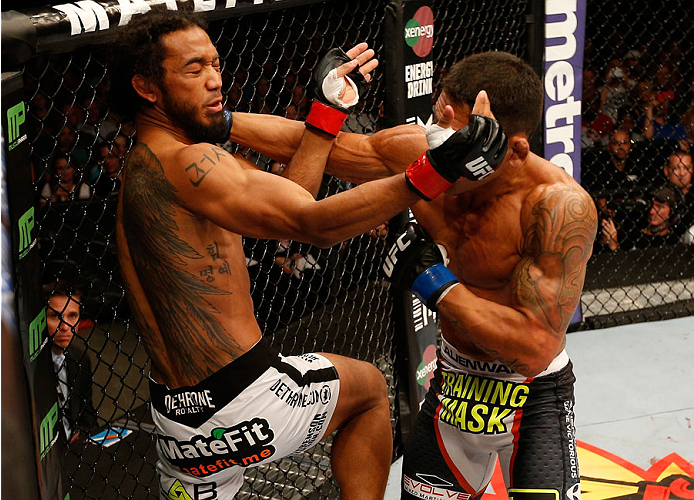 Henderson was throwing hard and often to open the bout, and you could hear the landed shots clearly at Octagonside. Dos Anjos didn’t shy away from the contact though, and he remained in the pocket, firing off kicks to let Henderson know that he was still there. And suddenly, the Brazilian struck with a right flying knee that dropped Henderson. The Arizonan sought a takedown in response but came up empty. As he rose, Henderson ate a left hand and fell to the canvas. After a couple follow-up shots, referee John McCarthy intervened, halting the fight at the 2:31 mark. It was an unpopular call with the fans in attendance, but Henderson took it with his characteristic class.

“We’ve got to take the ups with the downs, the good with the bad.”

The two fighters stood perilously close to each other as the bout began, and it was clear that when one of the welterweights landed, it was going to result in what soon happened, as Mein cracked Pyle (26-10-1) with a flush left to the face that sent the veteran from Las Vegas to the canvas hard. Mein pounced, firing off a series of shots that brought in referee Dan Miragliotta to stop the fight at the 1:12 mark.

With the win, Alberta’s Mein improves to 29-9. James Lee Mein, who typically works in his son's corner during fights, was banned from the Fight Night event by UFC officials following his arrest on a felony sexual battery charge Friday afternoon by Tulsa police.

Brazilian Jiu-Jitsu black belt Thales Leites continued to impress in his second UFC stint, extending his winning streak to seven with his second consecutive knockout victory, halting Francis Carmont in the second round of a clash of middleweight contenders.

Carmont was methodical, yet effective, with his first round attack, which was centered around his striking game. Most damaging to Leites were Carmont’s leg kicks, two of which knocked the Brazilian off balance.

The bout changed quickly in the second round though, as Leites came out much more aggressively, swinging with bad intentions behind every blow. A few of those blows tagged and hurt Carmont, most notably the right-left that sent the Frenchman face-first to the canvas, with referee John McCarthy stopping the fight 20 seconds into round two. 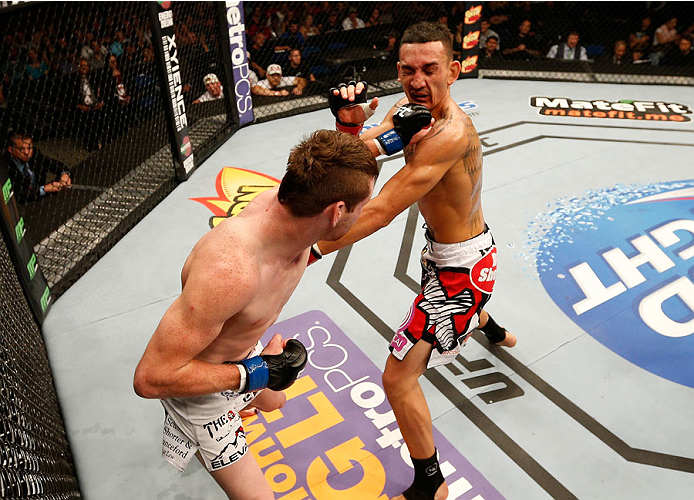 A late replacement for the injured Mirsad Bektic, newcomer Clay Collard may have lost his Octagon debut via third-round TKO to Hawaii’s Max Holloway, but before the end, he quickly became a fan favorite and a fighter who will be interesting to watch in the featherweight division with a full training camp behind him.

As the bout opened, it looked like Holloway was just going to be too much for Collard, both technically and experience-wise, but as the round progressed, Collard stood in there every step of the way, mixing up his striking attacks and getting more confident with every punch he threw. Holloway got back on track late in the round, but it was clear that he was in a fight.

The action stayed at a high pace in round two, with Holloway in control but the granite-chinned Collard refusing to go away – quietly or otherwise.

Seeking a takedown early in the final round, Collard instead ate a series of elbows and knees before allowing Holloway to get free. The bout would go to the mat in the second minute, but it was Holloway dominating with ground strikes before taking Collard’s back. Not surprisingly, Collard didn’t surrender, but he did take plenty of punishment when he turned into the mount. Finally, when Holloway took his back a second time, a barrage of unanswered shots brought in referee Dan Miragliotta to halt the bout at the 3:47 mark

With the win, Holloway improves to 10-3; Utah’s Collard falls to 13-5, 1 NC. Due to the late notice of the fight for Collard, the bout was contested at a catchweight of 149 pounds. 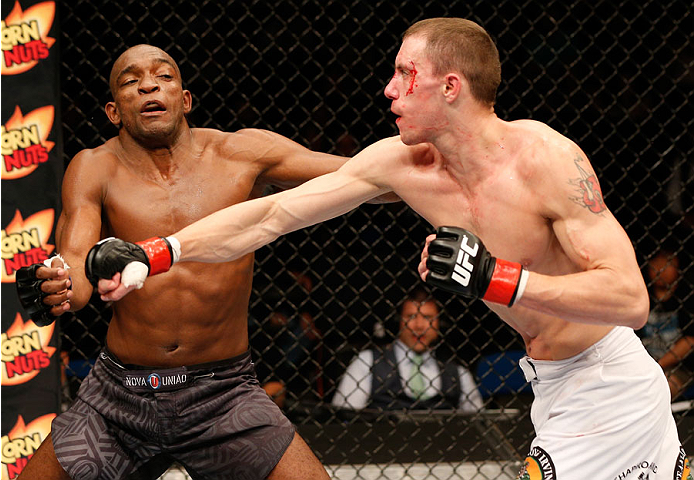 After a brief – very brief – feeling out process, the lightweights got down to business, exciting the crowd with plenty of toe-to-toe exchanges which left the distinct impression that neither fighter was lacking in the chin department. Lazaro mixed things up with two quick takedowns, but Vick didn’t stay grounded long, as he would rise and walk right back into the sloppy, but entertaining, stand-up fray.

Lazaro drew first blood in round two, cutting Vick over the left eye, but it was the Texan who landed the biggest shot of the frame with a little over 90 seconds left, rocking Lazaro and wobbling his knees until the Brazilian finished strong with some strikes followed by a takedown.

Vick tightened up his shots in the final round, tagging Lazaro with hard straight rights early on and knocking him down with a head kick midway through the frame. An inadvertent low kick brought a momentary halt to the action, but the slugfest resumed when referee Kevin Nix waved the fighters back in, and it was Vick’s more disciplined attack that allowed him to take the round and the win.

With a huge contingent of fans from Texas showing up to Tulsa to cheer him on, featherweight prospect Chas Skelly didn’t disappoint, picking up his first UFC win with a first-round submission of Finland’s Tom Niinimaki.

Skelly swarmed Niinimaki at the opening horn, pulling out all the stops to get the fight to the ground. And it went there, but it was Niinimaki who nearly locked in a guillotine choke. Skelly wasted no time going back on offense once he got loose though, and after the Arlington product sunk in a rear naked choke, that was it for Niinimaki, who tapped out at the 2:35 mark.