Stubborn Cormier Sticking to His Guns

"I know where my focus is. My focus has solely been on Roy Nelson this whole training camp." - Daniel Cormier 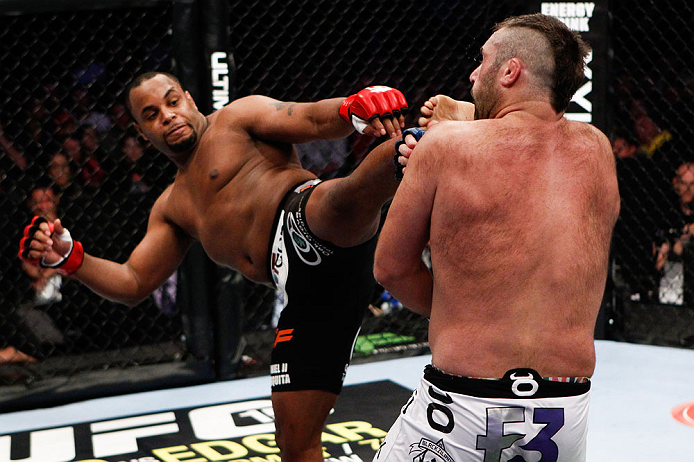 A prerequisite to greatness in anything is a stubborn streak. UFC heavyweight (and soon to be light heavyweight) Daniel Cormier has that part down. Whether it’s his choice of phone or his choice of weight class, once “DC” makes his mind up about something, it’s impossible to shake him from it.

Case in point: his decision to move from heavyweight to 205 pounds following his UFC 166 co-main event against Roy Nelson this Saturday. Firm in his decision, Cormier is presented with a scenario where his teammate and good friend Cain Velasquez loses his heavyweight championship to Junior Dos Santos in Saturday’s main event while Cormier scores a spectacular win over Nelson, thus clearing the way for an intriguing Dos Santos vs. Cormier battle in which he can attempt to avenge the loss of his friend.

He’s not hearing it.

“I’m going down regardless,” said the two-time U.S. Olympic wrestling team member. “I’ve made that decision. It’s hard for me to change. Once I have something set in my mind, that’s a wrap. So I’ve made my mind up to go down to the lower division, and that’s what’s gonna happen. It’s not gonna change if anything unforeseen happens in this fight with Cain and Junior. And I am so confident that Cain won’t lose, so hopefully by the end of next year, Cain and I will have the chance to hold championships together.”

And that’s that. The only unfortunate part is that with a compelling and dangerous opponent like Nelson in front of him, the bulk of the questions tossed Cormier’s way have been about his move to 205. He admits it’s been tough, but he’s keeping his mind where it needs to be.

“You have to be a professional,” he said. “And although I’m answering these questions, I know where my focus is. My focus has solely been on Roy Nelson this whole training camp. I went on Ariel (Helwani)’s show (The MMA Hour) and I said this is the last time I discuss this 205 thing and I tried my best to stay away from it. But as the fight’s getting closer, people are asking questions about it again, so it’s just being professional and keeping my focus solely on Roy Nelson and knowing that at any moment I can lose this fight.”

The plan at the moment for the unbeaten 34-year-old is to beat Nelson, call for a big fight at 205 pounds, and begin his hunt for Jon Jones’ light heavyweight belt. That plan will take a sharp wrong turn if he loses to “Big Country” this weekend, so Cormier is doing everything in his power to make sure that doesn’t happen. That includes not just looking for Nelson’s fight-ending right hand, but for the other elements of his game as well.

“When a guy finds a weapon, like when Josh Koscheck understood that he could knock somebody out with his right hand, he just started winging it and he wouldn’t wrestle as much as he did,” explains Cormier, who also doubles as an expert analyst for FOX when not preparing for a fight. “What I do is go back and look at Roy Nelson before, when he was the grappler and before he understood he had that big power. I look at that guy and see a completely well-rounded fighter. I don’t see a guy with one skill, and it keeps me on my toes because I know that at any moment Roy can secure that takedown, use his dominant top control, and put me in a position where I can’t escape and the fight gets finished. I see a guy with a ton of skills and the ability to fight in all situations and all areas of the fight.”

It’s all part of the MMA education of the Louisiana native, whose rapid rise to the top of the MMA world in just 12 fights has been nothing short of remarkable.

“It really has been fast,” he said. “I didn’t expect it to go as fast as it would. It’s kind of overwhelming because you don’t expect it that fast, and also with the number of fights. But when you look at my fights, at 12-0, nine of my fights have been in Strikeforce or the UFC. It’s not like I was fighting on the regional circuit before, so you would have to imagine that fighting in these organizations would have expedited my process a little bit. So it’s a little overwhelming, but at around 10, 11, 12 fights you start seeing guys fighting at the top of the sport. Chris Weidman’s a champion at 10 fights. Cain Velasquez was a champion at nine fights. So you’re starting to see this because guys have gotten the opportunity to fight in the big show a lot sooner.”

And while he obviously came to the sport as a pro in 2009 with plenty of wrestling skills, before that first bout, he was clearly a work in progress.

“It was hard because not only was I the best guy in my weight (in wrestling), but I was looked at as one of the better guys in the country of all the weights, and being one of the better guys consistently around the world,” said Cormier. “So it was a huge transition to come in and be a beginner again and it was really tough. You don’t know what to do. You want to fend for yourself, you want to defend yourself, you want to do better, but it’s so hard when these guys have so much more experience than you.

“It’s very humbling, because when you walk in, you do expect your accomplishments and everything to carry you, even in an unfamiliar situation,” he continues. “I was like ‘man, at the end of the day I can just wrestle and take these dudes down.’ Well, it’s not that easy. Regardless of what you did in your sport, it’s not that easy to just go in there and take the guys down. I had to learn to accept that you’re going to get your butt kicked.”

Yet after days turned to weeks to months to years, seeing Daniel Cormier getting his butt kicked in the gym is a rare, if not extinct, occurrence. And now, 12 fights in, there’s no turning back, and that’s fine with him, because the stubborn never look back.