After a wait of over a year for them to finally get in the Octagon, UFC middleweight champion Chris Weidman only needed two minutes and 53 seconds to finish off Vitor Belfort in the co-main event of UFC 187 at the MGM Grand Garden Arena in Las Vegas Saturday night, making it three straight Brazilian legends to fall at his hands. 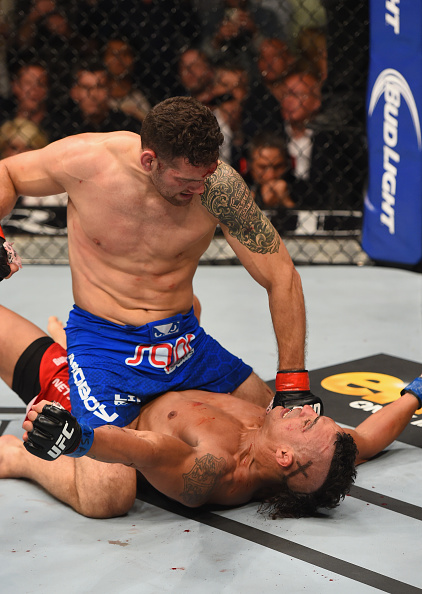 “Stop doubting me,” Weidman, who successfully defended his title for the third time, said. “It’s enough.”

Some wild scrambles took place in the early going, and Belfort took advantage with a barrage of close range blows that marked up Weidman’s face. But the champion responded with a takedown in the second minute and began getting even. Midway through the round, Weidman got the mount, and from there, the ground and pound attack was too much, with referee Herb Dean stepping in at the 2:53 mark after a series of unanswered blows.

“There’s no excuse,” Belfort said. “He was the better man tonight.” 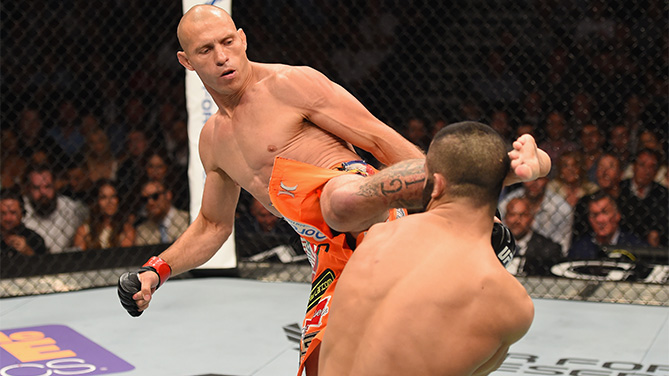 A thudding kick to the leg welcomed Makdessi to the Octagon, and Cerrone kept ‘em coming, occasionally rocking the Canadian, who hung tough, looking for the opening that would allow him to even the score. Late in the round, Makdessi began landing more, but not enough that took Cerrone out of his rhythm.

In the second, Cerrone poured it on, but Makdessi would always come battling back, having a lot of success with his left hand. But late in the round, Cerrone went on the attack with several attacks, with a left kick to the head forcing Makdessi to call it a night after apparently suffering a broken jaw. The official time of the stoppage was 4:44 of the second round.

Cerrone improves to 28-6 with 1 NC; Makdessi, who replaced the injured Khabib Nurmagomedov a little less than a month after defeating Shane Campbell at UFC 186 last month, falls to 13-4. 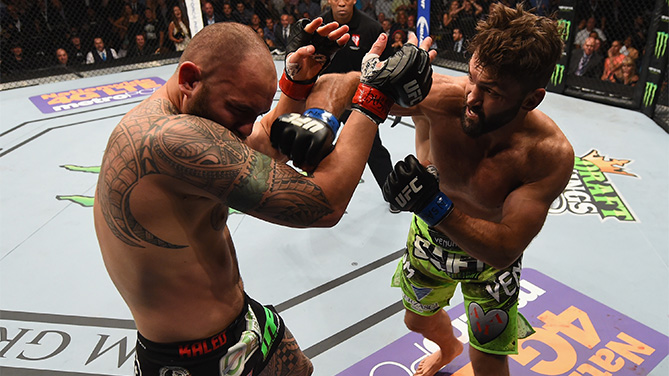 In a wild war that packed more action into 4:41 than most 25-minute fights, good friends Andrei Arlovski and Travis Browne fought like bitter enemies, with former UFC heavyweight champion Arlovski rising from the canvas to knock Browne out in a classic first round.

“This victory will not affect our friendship,” the number eight-ranked Arlovski said. “I love him like a brother.” The win over the number three-ranked Browne was the 36-year-old Arlovski’s fifth straight, with three of those coming since his UFC return in 2014.

Browne strode confidently toward Arlovski as the bout opened, but a right hand by Arlovski rocked the Hawaiian and sent him retreating to the fence. Arlovski unloaded, and while Browne recovered, a minute later he was put on rubbery legs once more by “The Pit Bull.” A wild miss by Arlovski was followed by a shot that put Browne on the deck, but just when it seemed like “Hapa” was done, he knocked Arlovski down. The Belarus native, who it was revealed later had pulled his calf muscle early in fight week, got back to his feet and unloaded more power shots on Browne, who was left hurt against the fence when referee Mark Smith wisely stepped in at the 4:41 mark. 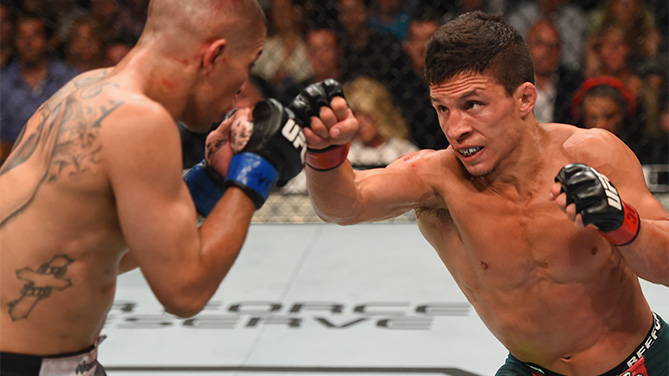 In a meeting of flyweight contenders, Joseph Benavidez remained on track for another shot at champion Demetrious Johnson, winning an entertaining three-round unanimous decision over John Moraga.

The punches and kicks started flying as soon as the two were waved in to fight, and though Moraga (16-4) looked to have an early edge after a kick to the head, it was Benavidez who landed with punches that put Moraga on the deck. From the top position, Benavidez went to work, looking for a choke as Moraga scrambled and got out of trouble. the New Mexico product got the bout right back to the canvas, but again, the gutsy Moraga got back to his feet, the two battling out against the fence until the Arizonan threw Benavidez to the mat briefly. It was Benavidez scoring with the last takedown of the exciting round though.

Benavidez (22-4) controlled the opening and closing segments of the second stanza, the first with his striking, the last with his ground work, and in the middle, Moraga landed with enough hard kicks that kept Benavidez from pulling away. It was Benavidez’ fight to lose as the third round opened though, yet he didn’t fight like it, keeping the pressure on while standing and on the ground to wrap up the win via identical scores of 30-27 on all cards.