"I can make weight tomorrow and fight the next day, that’s how ready I am." - Al Iaquinta 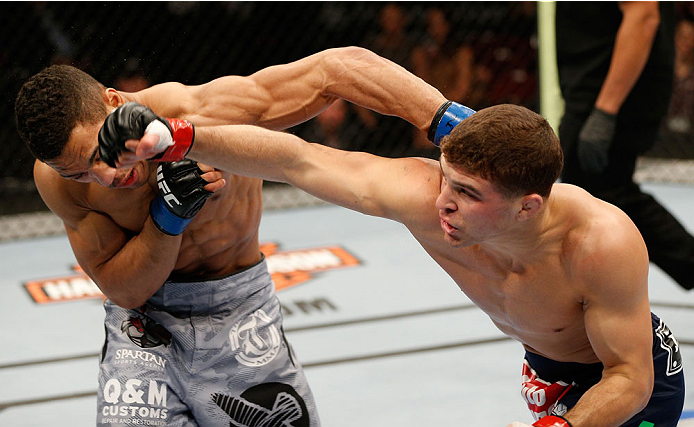 Long Island, New York has long been home to the red-headed stepchild of Big Apple sports franchises. Long gone are the dynasty days of the National Hockey League’s 1980-1983 NY Islanders, the upstart team that won four Stanley Cup championships in a row. And since the team plans a move to Brooklyn’s Barclays Center beginning in the 2015 season, it’s up to a few tough guys fighting out of the city’s blue collar towns to keep Long Island, Strong Island.

In a place mostly referred to by Manhattan natives as a “bridge and tunnel crowd,” it’s no wonder guys like former welterweight champion Matt Serra, welterweight Ryan LaFlare, trainer Ray Longo, Villante, Weidman and Iaquinta are all fighting like they have a giant chip on their shoulder.

“We’re hunters, we take pride in airin’ our prey out
Leavin ‘em layed out, … in just a sport
Cuz we ain’t playin’ up here in New York” - New York, Ja Rule

Iaquinta hails from Wantagh, Long Island, known as the gateway to Jones Beach, where music acts descend upon Nassau County’s diverse population summer after summer, like a circus coming to town once every year. On Memorial Day weekend, when Iaquinta weighs in at 155 pounds, Bee Gee’s founder and big brother Barry Gibb will be playing the Nikon Theater on Jones Beach.

The town’s police, EMTs and fire departments are all volunteer. It’s a community that looks out for its own, and whose claim to fame is, inauspiciously, being home to Long Island Lolita Amy Fisher, and reality TV star Rob Cesternino, of Survivor fame.

We can now add Alexander Jay Iaquinta to the list of notable Wantagh residents.

“He’s a tough guy and we match well against each other,” Al says of opponent Clarke. “But, he’s just another guy I have to go in and go to work with. I am confident I will come out with the win.”

Iaquinta is the essential Long Island, New Yorker. His accent is thick, sounding more like a cast member on “Entourage” or a hip hop artist than a professional athlete.

But the kid is a fighter. A UFC fighter. Make no mistake about that.

“I’ve always been confident in my skills,” he said. “I went through 13 weeks of the toughest season of The Ultimate Fighter and the first day of fights I beat Jon Tuck and then I beat Myles Jury so that should tell you something about who I am as a fighter. Thirteen weeks is a grueling journey and in the finale, Michael Chiesa and I were both beat up after such a long journey, and anything can happen. I made one mistake and he capitalized. I hurt my knee in the semis against Vinc Pinchel and that was tough on me, but I’m back now, and me winning three fights in a row now, that’s just who I have always been.”

Iaquinta lost via rear naked choke to Chiesa in the TUF 15 finale, and ironically both Pinchel, whom Iaquinta beat in the semis, and Chiesa are both fighting on the UFC 173 card along with “Raging” Al.

“So is Sam Sicilia,” says Iaquinta. “So there are a lot of us on from our TUF season on the card and it will be great to see those guys again. We all became really close during the show, and maybe we’ll all be in the same dressing room warming up together, and reminiscing about our time on the show. That would be cool.”

Plagued with injuries and a rotating list of contenders, the lightweight division has never been so ripe with opportunity since it was reinstated into the UFC in 2006. Iaquinta regards himself as being on the precipice of a breakthrough moment, and he knows no matter whose straw he draws, getting Ws is the key to setting himself up for a shot at a title elimination bout.

“The lightweight division is always full of opportunities,” he said. “So my job is to always be ready to pounce on any chance the UFC gives me.

When Iaquinta underwent surgery for his torn ACL, he was in good company. His Serra/Longo teammate Chris Weidman was also on the injured reserve, and Al says the two kept each other going during those dark times.

“When we were injured at the same time we helped each other get through, joking around about how much it sucked to be hurt,” he says.

The two have emerged from their time off victorious. For Weidman, back-to-back title fight victories over UFC legend Anderson Silva, and for Iaquinta, a unanimous decision against Ryan Couture started his current run, leading him to UFC 173.

Iaquinta thought he’d be fighting on the same card Weidman was to defend his belt for the second time, this one against Lyoto Machida, however double knee surgery forced the champ to postpone that clash a few more weeks.

“It sucks, but for me, fighting in Vegas and on a major card like this one doesn’t bother me too much,” he says. “I’m hoping it affects Mitch Clarke, because he’s only fought in Canada so he may have some jitters being in Vegas but he’s got a lot of experience so I’m sure it won’t affect him all that much.”

“If you think about it, Akira is right,” he said. “Renzo Gracie trickles down to Matt Serra and Ricardo Almeida, so all roads on the Northeast lead through Renzo. He’s like The Godfather. But Long Island has a good amateur MMA program and great wrestling, even though we still can’t fight here because MMA is still illegal for some odd reason. But there is no shortage of fighters here, especially in my weight class. There are plenty of guys my size who are really good to train with and we’ll have even more guys filling up our ‘East Coast Mafia,’ as Akira calls it. There are a bunch of guys in my gym and over at Bellmore Kickboxing so we are filling up those ranks pretty quick.”

As for his own game, confidence is not an issue. And health wise, Iaquinta says he’s just fine, and ready to rumble.

“I can make weight tomorrow and fight the next day, that’s how ready I am,” he said. “It’s been a long camp but perfectly timed. Everything is coming together at the right time. Hopefully I will get an impressive win and when I do I hope to up the stakes in competition and get a bigger name opponent, but I have to get by Mitch first.”