PLUS, THE RETURN OF SUPERSTAR GINA GARANO

SAN JOSE, CA – Four of the sport’s most talented heavyweights are set to collide when STRIKEFORCE® heads to American Airlines Center in Dallas, Texas on Saturday, June 18 for the quarterfinals of its Grand Prix Heavyweight Tournament. STRIKEFORCE®: OVEREEM vs. WERDUM will air LIVE on SHOWTIME® at 10 p.m. ET/PT (delayed on the West Coast). 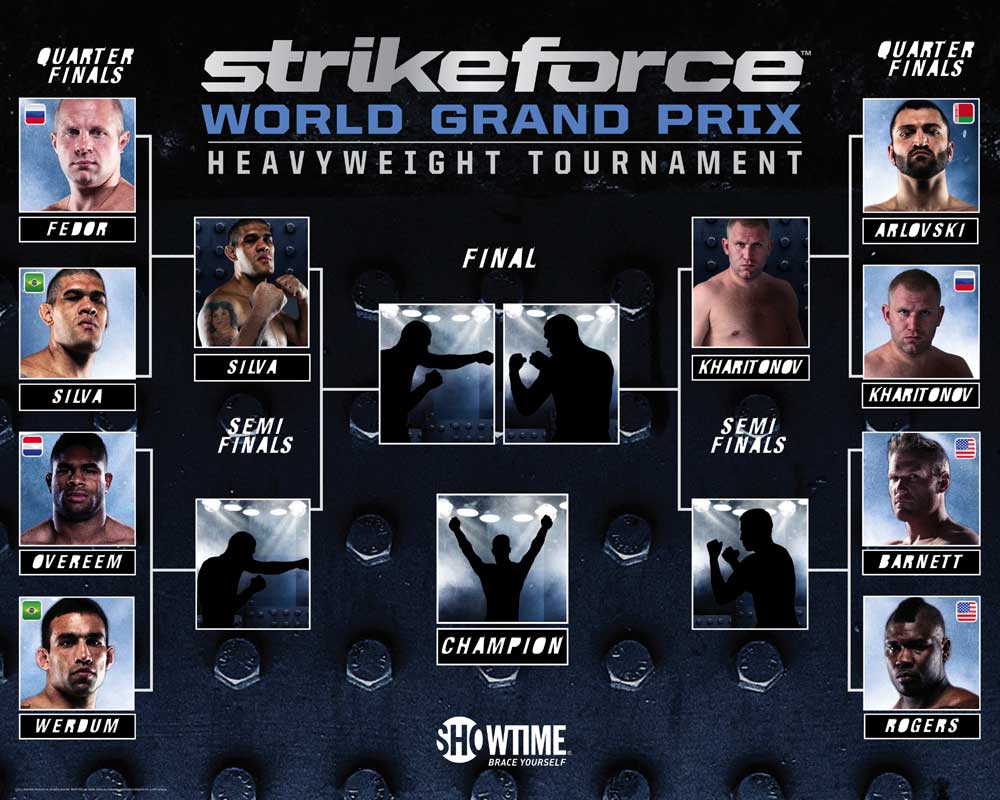 Plus, women’s mixed martial arts superstar Gina Carano (7-1) returns to action with her sights set on taking the STRIKEFORCE championship.

“We are really excited to head to Dallas with two outstanding quarterfinal heavyweight Grand Prix fights,” Strikeforce CEO Scott Coker said. “With Overeem vs. Werdum, Rogers vs. Barnett, as well as the return of Gina Carano, STRIKEFORCE is bringing one of its best cards ever to American Airlines Center.”

UFC® Fight Club™ members will have the opportunity to purchase tickets to this event on Wednesday, April 13 at 10 a.m. CT via the website www.ufcfightclub.com. (Non-members can join at Ticketmaster to take advantage of the pre-sale. A special Internet ticket pre-sale will be available to newsletter subscribers on Thursday, April 14, starting at 10 a.m. CT. To access this presale, users must register for the UFC newsletter through UFC.com .

The main event between 30-year-old Alistair Overeem (fighting out of Amsterdam, The Netherlands) and the 33-year-old Fabricio Werdum (fighting out of Porto Alegre, Brazil) pits the two superstars against one another nearly five years after Werdum submitted Overeem on a PRIDE® Fighting Championship card at Osaka Dome in Osaka, Japan on May 5, 2006.

Since their initial encounter, the 6-foot-5, 260 pound Overeem has become the first fighter in history to simultaneously hold both a major mixed martial arts (STRIKEFORCE) title and a K-1 Heavyweight Grand Prix championship. Meanwhile, Werdum has wreaked havoc on the heavyweight division, including his submission over Fedor “The Last Emperor” Emelianenko in June, which was considered 2010 Upset of the Year.

Josh Barnett (fighting out of Seattle, Wash.) is a former UFC heavyweight champion who owns victories over the likes of Randy Couture, Antonio Rodrigo Nogueira, Pedro Rizzo and Gilbert Yvel. The 33-year-old heads to Dallas with hopes of derailing his opponent and advancing in the Grand Prix. To do so, he must defeat the heavy-handed Brett Rogers (fighting out of St. Paul, Minn). The 6-foot-5 powerhouse reeled off 10 straight wins to start his professional career and holds knockout victories over the likes of former UFC champion Andrei Arlovski and PRIDE vet James Thompson.

A former Division I All-American at Oklahoma State University Daniel Cormier (fighting out of San Jose, Calif.) is unbeaten in seven fights. Training alongside the likes of UFC heavyweight champion Cain Velasquez and welterweight stars Jon Fitch and Josh Koscheck, Cormier’s blend of wrestling and power could pose problems for his opponent in Texas. With an unblemished record in 11 professional bouts, Shane Del Rosario (fighting out of Irvine, Calif.) remains unfazed by the hype surrounding his opponent. Coming off an impressive submission win over Lavar Johnson in February, the 27-year-old Del Rosario has finished every fight and expects nothing less when he meets Cormier on June 18.

A seasoned veteran riding a three-fight winning streak, Valentijn Overeem (fighting out of Amsterdam, The Netherlands) believes a win on June 18 could propel him into contention in the STRIKEFORCE heavyweight division. Thus, expect fireworks when he meets free-swinging Chad Griggs (fighting out of Tucson, Ariz.), who has won five straight, including a stoppage of Bobby Lashley.

This loaded event also marks the return of former STRIKEFORCE title contender Gina Carano (fighting out of Las Vegas, Nev.), who will take on an opponent to be announced in the weeks to come. The fierce striker, who turns 29 this Saturday, will train for this fight under the tutelage of renowned coach Greg Jackson, who has trained elite athletes such as UFC light heavyweight champion Jon Jones and UFC welterweight champion Georges St-Pierre. A rising star in the acting world, Carano is eager to get back to her first love and impress in her first bout since Aug. 2009.