Losing to Santiago Ponzinibbio was the best thing that happened to Sean Strickland.

Entering the bout in Porto Alegre, Brazil with a perfect 15-0 record, heralded as one of the top up-and-comers in the UFC and debuting in the welterweight division, Strickland wanted to be anywhere but inside the Octagon on that humid February night.

The weight of an unblemished record and the pressures, both real and imagined, that come with having a zero in the loss column as a professional fighter were burdening the promising prospect. 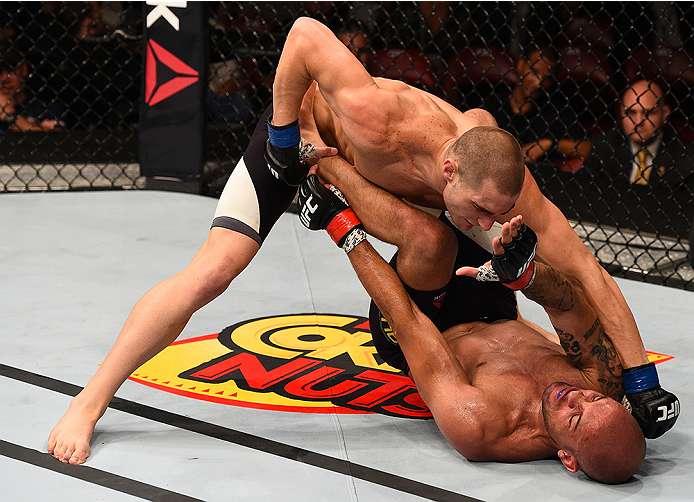 “Going into that fight, I didn’t want to be there and I didn’t want to take the fight,” Strickland admits, reflecting on the bout that ended with Ponzinibbio earning a unanimous decision victory and record keepers taking an eraser to the zero at the end of Strickland’s record for the first time in 16 pro fights. “Being undefeated just put so much pressure on me to where I wasn’t fighting Ponzinibbio – I was fighting myself.

With the loss behind him and his perfect record a thing of the past, Strickland has returned to the form that made him one to watch when he debuted in the UFC with a short notice, first-round submission win over The Ultimate Fighter veteran Bubba McDaniel at UFC 171 in Dallas.

Following a unanimous decision victory over Igor Araujo close to home in San Diego, the now 25-year-old Millennia MMA product made the cross-country trek to pick up a third-round stoppage win over Alex Garcia, a heavy hitter from the Tristar Gym in Montreal whose only previous UFC setback came against one of the welterweight division’s rising stars, Neil Magny.

“After I got that loss out of the way, it feels better going into a fight, going in knowing that it doesn’t really matter if I lose now,” Strickland says. “I used to think, ‘I’ll get kicked out of the UFC if I lose’ and this and that, but now, I’ve been training for over 10 years now and it matured me to the point where I’ve embraced winning and losing and whatever might come from it. It helps me out when it comes time to perform.”

Strickland’s next opportunity to perform comes this weekend at home, as the UFC debuts at The Forum, a venue made famous by the Los Angeles Lakers. The local favorite will look to continue his climb up the welterweight ladder in an intoxicating matchup against fellow upstart Tom Breese in the UFC FIGHT PASS featured prelim bout at UFC 199.

Don't miss out on Strickland vs Breese and more this Saturday! Start your UFC FIGHT PASS free trial now!

Like Garcia, Breese is a Tristar product, having moved to Montreal from his native Birmingham, England after falling right in with everyone at the famed fight camp during his initial visit several years before he arrived on the UFC stage. A third-round submission win in his first fight in nearly two years following several injuries earned Breese the call to the Octagon, and a trio of strong performances have garnered the now 10-0 talent a ton of hype, setting the stage for this pivotal showdown with Strickland on Saturday.

While most fighters in his position would take every opportunity to explain how and why they were going to be the one to halt Breese’s climb – offering up promises of a first-round knockout and endless clichés about their training camp and form heading into fight night – Strickland comes in at the other end of the spectrum.

“I’m not confident at all,” he says. “I know that I’ve trained hard and that I’ve been training my entire life for this; that I’m going to go in there and ask myself to have a good performance, fight smart, fight tough, not give up, not quit. Other than asking myself to not quit, take a punch well, give a punch well, that’s all you can ask for in this sport.

His voice trails off momentarily.

“You go in the gym and you hear most guys say how great they are,” he continues. ”They say they’re going to beat so-and-so and they fall in this rhythm and it’s almost like they’re trying to convince themselves that they are the best, that they are the greatest.

“I just want to go out there and live up to my own expectations of performance.”

At the end of the day, that’s all anyone can ask for.