A close fight on paper turned into a close fight in reality in UFC 199 prelim action at The Forum in Inglewood, California, as welterweight up and comer Sean Strickland outpointed previously unbeaten Tom Breese via split decision Saturday.

The first round wasn’t the most exciting, considering what had already been seen on the prelim card to that moment, but it was competitive, with the more accurate and busier Breese holding the edge.

The second was more of the same, this time with Strickland starting to even things up, setting the stage for an interesting third frame. And it was, with each fighter having his moments and Breese apparently jumping into the lead with a late takedown until a final surge on the ground from Strickland sealed the deal for the Corona product. 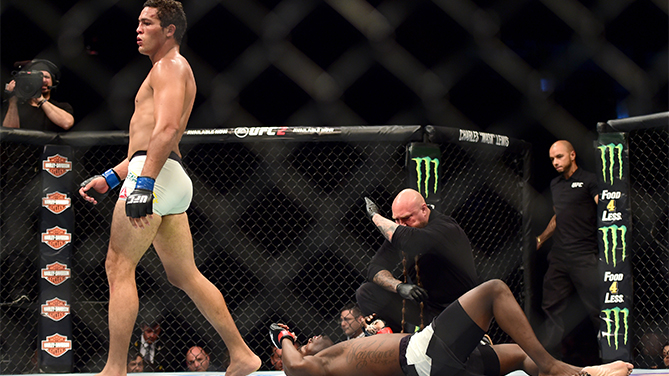 A light heavyweight matchup between two fast finishers turned into a punishing war of attrition, with Brazilian newcomer Henrique da Silva stopping Jonathan Wilson in the second round to keep his unbeaten record intact while handing his foe his first pro defeat.

After a back-and-forth first round that saw both fighters streak into the lead, Wilson entered the second frame winded and on the receiving end of da Silva’s attacks on the feet. But just when it seemed like Wilson was about to get finished, he landed a left to the jaw that dropped da Silva. But as Wilson looked for the knockout on the mat, da Silva swept him and landed in full mount, where he landed a series of unanswered strikes that brought referee Mike Beltran in to stop the bout at the 4:11 mark. 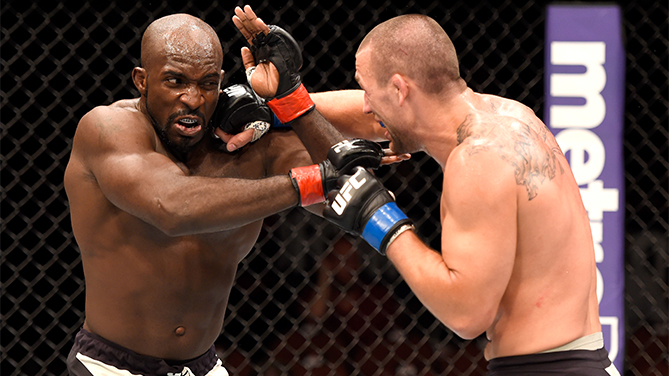 Stepping into the Octagon less than 24 hours after the passing of his father-in-law, boxing legend Muhammad Ali, Kevin Casey fought with a heavy heart against Elvis Mutapcic but still managed to pull out a three-round draw in middleweight action.

“It’s a lot to go through before a fight,” Casey said. Thank you for the support, God bless my family.”

Casey (9-4-1 with 2 NC) started the fight off strong behind his kicks to the leg, and while Mutapcic began to find his striking rhythm, Casey killed that momentum with a takedown and ground control for the rest of the frame.

Casey’s takedown in round two was an even more telling one, as he landed in the mount position. Mutapcic (15-4-1) battled out of trouble and back to his feet though, and while the two were locked in the clinch against the fence, the Iowan found enough openings to land knees to the body and legs.

Fatigue set in for California’s Casey in the third round, allowing Mutapcic to surge and nearly finish the bout with ground-and-pound in the final seconds, 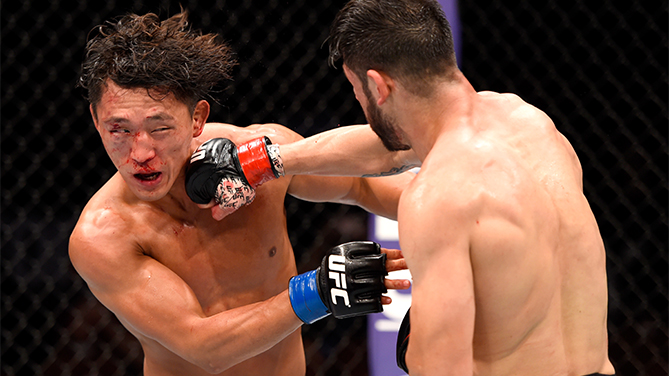 South Korea’s “Maestro” Dong Hyun Kim and Mexico’s Marco Polo Reyes made their case for Fight of the Night in the first bout of the evening, with Reyes eventually winning the war via third-round knockout.

The first round was one of the most memorable in recent memory, as both fighters left nothing up to the imagination as they sought the finish. Slugging it out with reckless abandon, both had their moments, yet while Kim had Reyes in trouble early, two knockdowns by “El Toro” put the Mexican battler in the lead as the round closed, both men bloodied as they went back to their corners.

Reyes’ attack went to the head and body in round two, jarring his foe repeatedly, but it was Kim who staggered Reyes and had him on the verge of a finish before the former TUF LATAM cast member roared back with knees in the clinch. The exchange appeared to take a lot out of Reyes, but just as soon as he was being written off, he rattled Kim with his return fire, adding another chapter to an epic battle.

In the third, both men were rightfully exhausted, but Reyes looked to have a little more gas in the tank as he continued to stay busy. Kim didn’t back down, but eventually, Reyes scored with a right hand that staggered the “Maestro,” and a second right ended matters at the 1:52 mark.