A meeting of welterweight prospects ended in a positive manner for Sean Strickland on Sunday, as he stopped Alex Garcia via strikes in the third round at Consol Energy Center in Pittsburgh.

After a wild scramble early on, Strickland was able to get Garcia to the mat, and he nearly halted his foe with ground strikes before “The Dominican Nightmare” roared back and reversed position, getting on top for the rest of the round, even though he wasn’t nearly as effective there as Strickland.

Garcia began landing with hard right hands in the second round, but Strickland took them well. Strickland landed some hard kicks to the leg over the course of the frame, but he wasn’t as busy as he was in the first though, and a Garcia takedown with a minute left may have allowed him to steal the round.

Getting the takedown early in the round this time, Garcia began working immediately, but Strickland got back to his feet quickly and started to press the action with his jab. With a minute left, that jab rocked Garcia and had him on rubbery legs. Strickland went in for the finish, and he got it, with a straight right putting Garcia down and ending matters at the 4:25 mark.

With the win, Corona, California’s Strickland moves to 17-1; Montreal’s Garcia falls to 13-3.

After a brief feeling out process, Bamgbose distracted Sarafian with some hand movements, then fired off a left kick to the head that dropped the Brazilian. Sarafian was then tagged with some ground strikes, including an uppercut that ended the bout, with referee James Chappell intervening at the 1:00 mark.

With the win, Bamgbose moves to 6-1 with six first-round knockouts; Sao Paulo’s Sarafian falls to 10-6.

Back in the UFC on short notice, veteran middleweight Anthony Smith made the most of his opportunity, winning a close, but unanimous, decision over debuting Brazilian Leonardo Augusto Leleco.

Smith (25-11) dominated the first round behind a varied array of strikes, as Leleco had no answers for the Nebraska product. After getting cut in the final minute though, a tiring Leleco fired back, pulling out all the stops to get his respect from Smith.

Leleco (11-2, 1 NC) refused a touch of gloves to start round two, and the Brazilian landed two hard shots that rocked Smith moments later. After eating a second right hand, Smith got a takedown to clear his head, and he was able to take his foe’s back, punctuating the time there with a slam in the fourth minute. In the final minute, Leleco got a break when the fight was restarted, and he rallied to end the round.

Continuing to rally against the odds, Leleco went on the attack in the third, and his body shots were taking a toll on Smith, leading to a trip back to the mat. There, Leleco began firing away with strikes, but referee Chip Snider restarted the action with a minute and a half left. Smith was showing the effects of taking a fight on less than a week’s notice, but he was able to make it to the final horn and get the win. 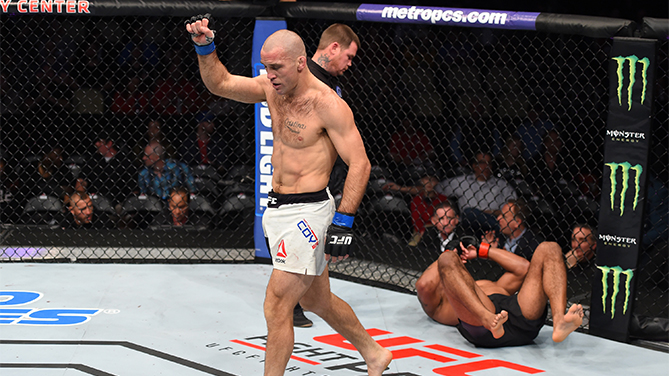 The unanimous decision for Coy read 29-28 across the board.

The first round was competitive, with Coy pushing the action and Webb counterpunching well in response, and that pace carried into the second, with Webb nearly locking in an armbar when the bout strayed to the mat while Coy continued to fight well at close range on the feet, eventually pressuring Webb and getting him to the canvas.  With a minute left in the second, Coy got full mount, putting a stamp on a solid stanza.

Webb got the fight to the ground in the third round and nearly locked Coy up, but the veteran eluded any danger and got into the top position on the mat, where he kept the New Jersey native until the final horn.