Stout Retires with a Legacy to be Proud Of 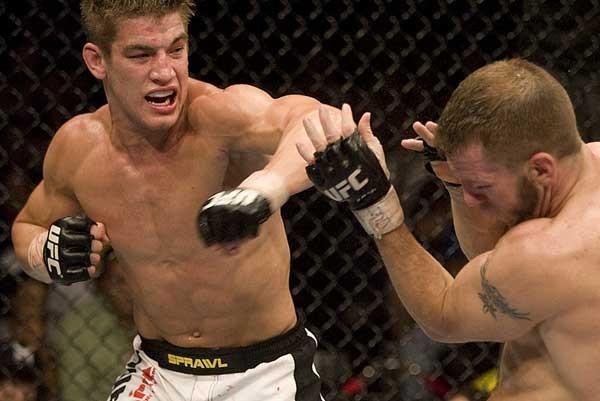 As a newly minted retiree, Sam Stout has to get cut a little slack when asked what his time capsule moment as a prizefighter is. So he gave three moments on the day he officially hung up the gloves.

“For me, it would be the whole trilogy with Spencer (Fisher),” Stout said of his three bouts with the Iowa veteran. “The first fight, he took it on short notice and we had a great fight. The second fight, he got the better of me. The third fight, I kinda changed it up on him and threw a monkey wrench in his game plan and threw some takedowns in.

“I kept in touch with Spencer after all that, we have a tremendous amount of respect for each other, and we kind of helped make each other’s career,” he continues. “I taught a seminar at his gym this past summer and spent some time hanging out with him and his family, and that trilogy is probably the greatest combination of moments in my career.”

It’s hard to argue with the London, Ontario native, who announced his retirement Wednesday at the age of 31. But if there is any issue with his choice of his storied trilogy with the “King,” it’s that Stout needed Fisher to define his career. Yes, the bouts were all memorable, with the lightweights putting together memorable bouts inside the Octagon while maintaining a friendship outside of it, much like Arturo Gatti and Micky Ward did in boxing. But Sam Stout was always his own fighter, and with Fisher or without him, he was always going to have a place in the MMA history books as a pioneer of the sport in the Canadian market who went from local hero to international star thanks to a seemingly endless array of action-packed bouts.

A member of the UFC roster since 2006, Stout (21-12-1) made his debut in the Octagon on the night the 155-pound weight class was reinstated in the promotion at UFC 58, and with the exception of three bouts in 2006-07 when he fought outside the organization, he never left what many believe to be the toughest division in mixed martial arts.

Twenty times Stout made the walk to the Octagon as a UFC fighter, picking up seven Fight of the Night bonuses and one award for Knockout of the Night, and as the UFC made inroads into his native Canada, it was fighters like Stout, his good buddy Mark Hominick, Georges St-Pierre and Patrick Cote who led the way. It’s a source of pride for him that he’ll always have to look back on.

“That means a lot to me that I was one of the Canadian trailblazers, fighting in those early UFCs, and it’s a real big honor for me to represent Canadian MMA for as long as I did,” he said. “I’m really proud of that accomplishment and I take a lot of national pride in my career.”

Stout would never fight for a UFC title, but some fighters leave a mark without putting a gold belt around their waist. Stout was one of those guys thanks to a free-swinging style that earned him the nickname “Hands of Stone.” His chin was equally made of stone during the bulk of a pro MMA career that began in 2003, but after three recent defeats to KJ Noons, Ross Pearson and Frankie Perez that saw him finished by strikes for the first time ever, Stout decided that it was time to make a graceful exit from the competitive side of the sport.

“I would have liked to go out on a high note, but that’s pretty rare in this sport,” he said, ten days after the loss to Perez on August 23. “The first knockout loss with KJ, I said to myself, okay, KJ has knocked out some very tough guys, and that’s his thing; he’s a great boxer. The same thing with Ross Pearson. But after the third time, it’s not that Frankie Perez doesn’t know how to throw a punch, but he’s more of a grappler, so I got knocked out by a submission guy. Three in a row, I don’t want to risk my health. I’ve got a daughter to think about, and sometimes you just gotta know when to hang ‘em up.”

Stout, like Hominick, knew the right time to call it a day. As for 14-month-old Logan, she got the first of many weeks of undivided attention from her now-retired dad since his last fight. As for any other notable good times since deciding to begin the next chapter of his life, he laughs.

“I also ordered a big pizza. I definitely enjoyed that one.”

Eating like the rest of us non-fighters aside, Stout is already back in the gym – as a coach – and it’s likely that he will be in that role for quite some time.

“I’m back to teaching already, and it’s definitely always going to be a part of my life,” he said. “That being said, I’ve always thought that I don’t want to make mixed martial arts my entire identity for my whole life. But that gym’s always going to be close to my heart, and I’m going to train people for the next little while to pay the bills, and I’ll always train some guys that are close to me and I’d like to help some younger guys with their careers. For example, I’d really like to help out Rino Belcastro with two of his young guys, TJ and Tony Laramie out of Windsor. These two kids are 16 and not even 18 and they’re the next big thing. So I’d like to be a part of the careers of kids like that, and MMA is always going to be a part of my life. It’s in my blood.”

But about that time capsule…

“If you want to say my one performance that I felt the best about, when it was the best I ever felt in the ring and everything was on that night, I think the best I’ve ever looked in the ring was the fight with Joe Lauzon,” he said. “I think that was the best Sam Stout that ever stepped into the Octagon.”

Stout won that bout with Lauzon at UFC 108 in January of 2010 via unanimous decision, and not surprisingly, the two lightweight action heroes picked up Fight of the Night honors. The victory came in the midst of Stout’s best UFC run, where he went 4-1 with three Fight of the Night awards and one KO of the Night bonus, with his only loss coming via split decision to Jeremy Stephens. His coach during that stretch was the man who was with him for years, Shawn Tompkins.

Tompkins, who was also Stout’s brother-in-law, tragically passed away of a heart attack at 37 in 2011. Four years later, as Stout retires from the sport, the question usually would be “how would you like fight fans to remember your career?” Instead, it’s fitting to ask how Tompkins would have reacted to this moment and his pupil’s more than 12 years as a professional mixed martial artist.

“I’d like to think that he would have said ‘I’m proud of you and you left it in the cage every single time,’” Stout said. “I never went out there and tried to squeak out a win; I always tried to go out there and fight as hard as I could. And Shawn was one of those guys who was all about being an old school tough guy. I think I lived up to that, and I think he’d be proud of that fact.”