Stout Looking for KO of the Night

"I'm actually going for a Knockout of the Night bonus for this one." - Sam Stout 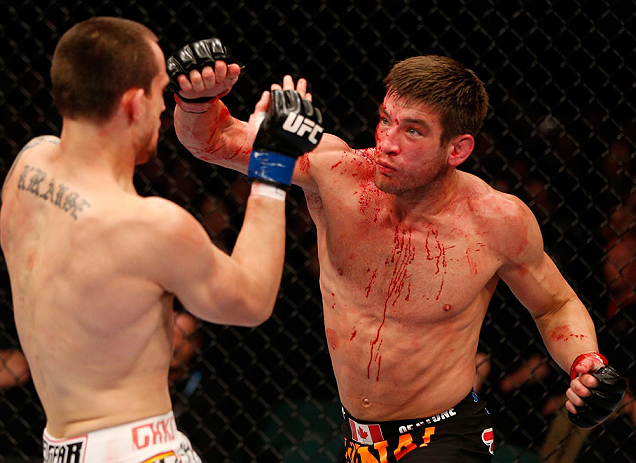 Sam "Hands of Stone" Stout is looking forward to welcoming Cody McKenzie back to the lightweight division.

The London, Ontario lightweight faces the TUF alum in FS1 prelim action on the UFC on FOX 9 card on December 14th. The bout marks McKenzie's return to the division after going 1-1 during his two year run at featherweight.

"I'm going to put it on him, that's for sure," says Stout. "I'm excited to be fighting on FOX because it's a much wider audience. You know, not everybody has the money to buy the Pay-Per-View all the time so I'm happy that this fight will be free for everyone and anyone to watch me do my thing in there."

For Stout, McKenzie plays right into his strengths as a kickboxer known mostly for the stand and bang style that has garnered him six Fight of the Night bonuses.

But Stout isn't looking for one of those on this night.

"I definitely am going to do my thing, but we all know Cody doesn't like to get hit in the body," Sam said, referring to the Chad Mendes one punch bodyshot knockout McKenzie fell victim to at UFC 148. "And I like hitting to the body. So I'm actually going for a Knockout of the Night bonus for this one. Besides, this is a stacked card with Benavidez, Mendes, and Faber, so there are going to be plenty of Fight of the Night contenders."

Stout does have one KO of the Night in the books, and it came against a southpaw - just like McKenzie.

"That knockout was against Yves Edwards, who is another lefty, so there are several inherent advantages I have against Cody," he said. "Cody is really aggressive and he's hard to prepare for because he's really tall and really unorthodox. His striking is unorthodox. His jiu-jitsu is unorthodox. It's hard to find training partners who can emulate his style."

So Stout went back to his roots.

Before he followed his late coach Shawn Tompkins out of Xtreme Couture in Las Vegas to a spot across The Strip, Stout trained daily with the likes of Mike Pyle, John Gunderson and Phil Dace. He found them once again for this camp, this time at Syndicate Mixed Martial Arts, a hugw training center in the heart of Las Vegas that has become one of the go-to spots for fighters plying their trade in Vegas.

"We had some really good guys the weeks Sam was here," said Jason Hallikainen, one of the gym's managers. "GSP came in to get ready for Johny Hendricks, and we had Steve Lopez, Rick Story and Rodrigo Botti also here, so Sam got some good work in."

"There aren't too many tall lefties in London," said Stout. "So Syndicate was great because nobody has an ego, and so many guys are in there at any given time that it was easy for me to find tall lefties to work with so I can get used to someone like Cody. Plus, it was great to see the guys. It brought back great memories."

McKenzie poses several dangers for Stout, the most obvious being his guillotine choke. And while Stout's wrestling has improved by leaps and bounds over the years, he said he's not going to try his luck on the mat if he can avoid it.

"I definitely don't want to be shooting a double with my head on the outside against Cody," he said. "I will likely play it safe. Even if the takedown is there I will most likely stay on my feet and work my game. I don't even want to put myself in that position."

At age 29, Stout has as many pro career fights as years on this Earth, and UFC on FOX 9 will mark his 31st bout. That's a lot of wear and tear for one so young, but don't expect to see Stout taking a page out of other fighters' books and cutting to featherweight anytime soon.

"No way brother," he said. "Not a chance. I have a hard enough time making it to 155 and I find it miserable. When I'm down to 155 I'm at two or three percent body fat. If I were to go to 145 I would just be shedding muscle. We've seen guys cut weight and it doesn't work for everyone. Being the bigger, stronger guy is sometimes overrated in this sport. There are so many factors and everyone is so well rounded now that size doesn't really matter so much anymore. Besides that's the kind of thing that takes the fun out of the sport for me.

When I don't have fun I don't perform well so I will never be cutting a weight class. You can quote me on that."