“He’s the biggest influence I’ve ever had in my life. It’s an interesting adjustment period that I’m having but I feel like I’m coping with it really well.” - Sam Stout on his late coach, Shawn Tompkins

Watch clip of Stout talking about training without Tompkins 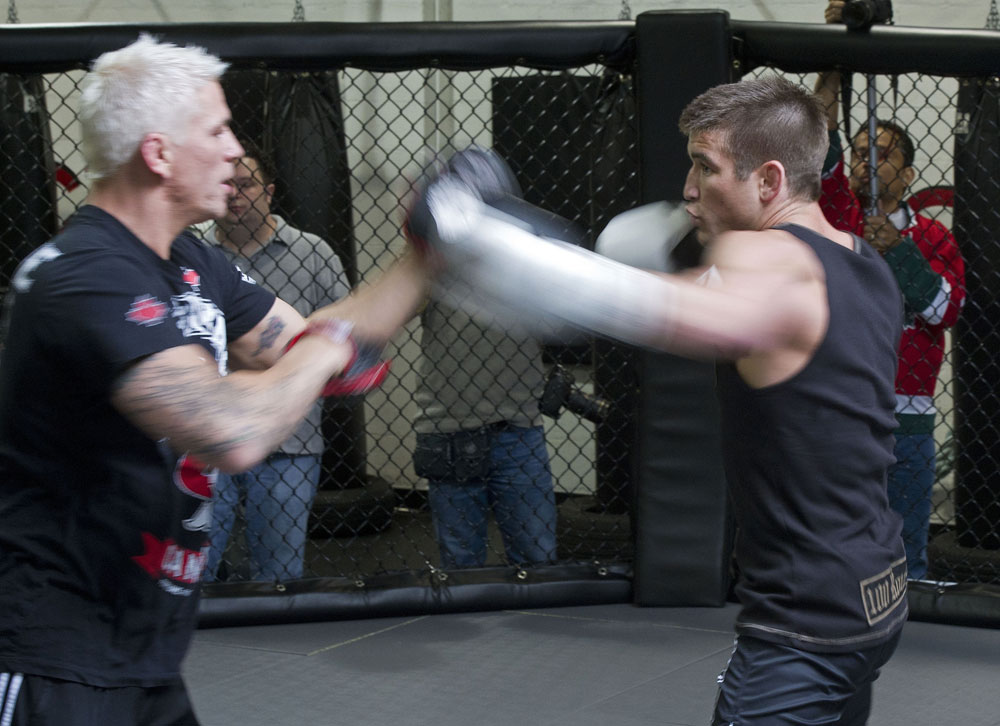 Fighters get the credit for knockouts, but oftentimes an unsung hero drew up the game-ending play. I have witnessed numerous instances where a cornerman has yelled a striking sequence and then, a second or two later, an unconscious fighter crashes to the canvas. Trainer Duke Roufus is the king of this “I bark instructions, the other guy falls” phenomenon.

Another mastermind who blazed one helluva track record in that regard: the late Shawn Tompkins.

“I can’t even count how many times he’s done that,” said UFC veteran Sam Stout, who spent 11 and ½ years as a Tompkins protégé.

The last time that Tompkins called the perfect play at the perfect time was back in June 2011. Stout had no advance warning that, after 11 UFC bouts with his inseparable mentor by his side and in his ear, UFC 131 would represent finality: The final time Tompkins would walk Stout down the aisle and help him navigate the dangers that lurked inside of the Octagon.

On that special night, deep in the first round, Tompkins issued a command: Double up on the right cross. Left hook over the top.

Without thought or deliberation, Stout fired off the prescribed punch sequence in the blink of an eye.

The first right cross, aimed at Yves Edwards’ head, missed. The second right cross struck Edwards’ body, with minimal damage. But the left hook … well, it was nearly a perfect punch. It whiplashed Edwards’ chin, and the veteran was out before he hit the canvas. The knockout was as frightening as it was spectacular, the kind of knockout people who witnessed it will never forget, the kind of knockout you mention to friends, the kind of knockout that you rewind dozens of times and watch over and over again. It was the signature win of Stout’s eight-year career, a knockout for the ages.

For the man nicknamed “Hands of Stone,” it was a relief of sorts. In 10 previous UFC fights, many of them riveting barnburners, Stout had never finished an opponent. So he soaked in the glory of the moment, jumping on the cage to hug an elated Tompkins.

“I had a real good ability to hear his voice and take direction from him very well,” Stout said in the days leading up to his UFC 142 clash with Brazilian Thiago Tavares. “Hopefully I can keep that going with (Mark) Hominick in my corner and he’ll be able to see those things and call them out. But that’s one of the things that will be different about this fight.”

The 27-year-old Canadian answers that question a lot these days. He’s been answering it since August of last year, when 37-year-old Tompkins perished in his sleep from cardiac arrest. Stout didn’t just lose his trainer since the age of 17. He lost a confidante, a brother-in-law, the man who taught him “90 percent” of what he knew about the mixed martial arts game.

“He’s the biggest influence I’ve ever had in my life. It’s an interesting adjustment period that I’m having but I feel like I’m coping with it really well,” said Stout (18-6-1). “I spent so much time with him and we were so close that I feel like I can really look inside myself and realize what he would be telling me. I just have to remember all of the lessons he taught me over the years. Just because I don’t hear him in my ear doesn’t mean I can’t look inside of myself to the things he used to inspire me.”

Part of Stout’s change of scenery involves conducting his training sessions in Ontario, as opposed to Las Vegas, Nev., where Tompkins lived.

“For the past 11 and ½ years, geez, I had Shawn there to make sure I didn’t get lazy or complacent. Now I have to do that myself,” Stout said. “I have to dig deeper inside myself. The mornings that I don’t feel like waking up and training, I’ve got to go do it, even though Shawn’s not there kicking my ass to get out of bed. So I’ve had to become a lot more self-motivated.

“I was really nervous going into this training camp about how it was going to go and how these changes we’ve made would affect me. In Vegas none of my friends were bothering me or asking me to do things so I could focus solely on the fight. So I was worried about distractions at home, people seeing me getting ready for a fight but not realizing I would be a lot less accessible. But people have been really good about it. Sometimes I have to be a little selfish and tell people I can’t do one thing or another. Usually they are understanding about it, and if they aren’t I don’t really care. So it’s been nice to go home and sleep in my own bed during training camp.”

Tavares is a Brazilian jiu-jitsu black belt, yet Stout’s submission defense has lived up to his last name; he’s only been submitted once in the UFC – five years ago against Kenny Florian. Armed with stingy takedown defense, Stout isn’t shy when conceding he prefers a standup battle.

“His aggressiveness and his top control are the two things I’m most worried about,” Stout said of Tavares (20-4-1). “He’s a powerful, explosive fighter who will come and bring it. He’s not scared; he’s very aggressive. So I have to be ready to work a very fast pace and be ready to work off my back and get back up if I do get taken down.”

On Stout’s right shin, there is a tattoo that carries greater meaning today than the permanent ink did nine years ago when it was embedded on his flesh.

“Shawn gave me a tattoo on my shin that myself and Mark (Hominick) have – Chris Horodecki doesn’t like tattoos, so he didn’t get one, but we’re working on that,” Stout said. “The tattoo is in Japanese letters and says “Fight, spirit, pride.” It’s a tattoo that Shawn had on his shin that once a guy got to a certain level Shawn would trace it off of his shin onto their shin. I have it, Mark has it, the most elite guys from Team Tompkins all have it. It was a big moment for me. It was early in the spring and I was wearing shorts every day after that. I wanted to show it off. That’s something that I’ll carry with me every day and I will for the rest of my life. That was a gift he gave me.”

Some say that while Canadians are MMA-obsessed, and great fans, Brazilians might be even more passionate in the stands. A proud Canadian, Stout welcomes the chance to fight in such a raucous and extraordinary environment, even though almost everyone in the house will be rooting against him.

“There’s nothing I love more than going into an arena and you can feel that electricity in the air,” he said. “I’m sure that’s how it will be in Brazil. The first couple fights in Canada were like that. You can feel that rumbling of the arena and it’s an amazing feeling. It sucks that it won’t be for me this time, but it’s still something I’m going to enjoy. Hopefully I win over some of the Brazilian fans by the end of the night. I feel really good about this fight. Shawn gave me all the tools I needed to allow me to win this fight. It’s just a matter now of implementing them myself and not waiting to hear Shawn’s voice telling me what to do.”